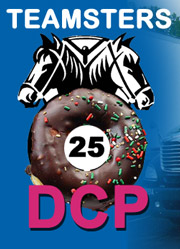 Teamsters Local 25 indicated last week that its members would strike the distributor, Northeast DCP, potentially halting operations at as many as 2,500 Dunkin’ Donuts and Baskin-Robbins locations.

The union has accused Northeast DCP, which is owned by Dunkin’ Donuts franchisees, of interfering in contract negotiations for some 200 drivers who elected to join the union last August. The union has until August to negotiate the first-time contract or face possible decertification.

The Teamsters are expected to resume talks with Northeast DCP on July 16, under the supervision of a federal mediator, said Michelle King, a spokeswoman for Dunkin’ Brands.

King said Dunkin’ would continue to monitor the situation and do everything it could to keep business operating without interruption should the drivers decide to strike the distributorship.

“The Teamsters’ dispute is with an independent distributor. The distributor has informed us that they are bargaining in good faith and intend to continue discussions until they reach an agreement,” King said in a statement. “While Dunkin’ Donuts has no role in these negotiations, on behalf of both parties we hope an agreement is reached soon.”

Representatives for Teamsters Local 25 and Northeast DCP did not return requests for comment at press time.