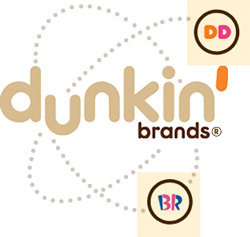 Yesterday, Dunkin’ Brands released their Q3 earnings numbers – missing the revenue consensus target by $4.5 million but beating the EPS target by $.02 on an adjusted basis.  Our restaurant analyst, John Gordon of Pacific Management Consulting Group, provides us the following notes . . .  It noted its sales would be a challenge and would fall short of meeting the low end of the 2-3% Dunkin’ Donuts US full year comps target.  DBI declared a $.23 cash dividend (larger than expected) which should counter some of the negative news and temporarily satisfy investors.  Nigel noted throughout that they were disappointed with sales.  DD US net new unit opens were noted at 120 and US comp sales at +2.0%.  Nigel reported that DD US pricing was +1.1% of the comp, but was offset somewhat by “strategic discounting and that transaction counts were slightly positive in both AM and PM (apparently up +1%).