By Cathy CassataPublished May 17, 2016Category Features

It’s a lingering question: Is McDonald’s all-day breakfast hurting Dunkin’ or isn’t it?

According to John Gordon, principal of Pacific Management Consulting Group and DDIFO’s restaurant analyst, the question will hang around for a while longer.

“It’s still too early,” says Gordon. “First, Nigel Travis says Dunkin’ didn’t see any impact and then he says it did. But it’s well known that McDonald’s 1.4 billion dollar ad fund allows them to do way more in terms of advertising than anyone else.”

Even as industry experts pronounce McDonald’s revitalized after its foray into all-day breakfast, they note how Dunkin’ Donuts is facing a drop in U.S. same store sales. The 0.8 dip is part of a 5.4 percent fall since 2011. According to Gordon, the trend is not positive, “but Dunkin’s same store sales rate has been weak for several periods of time and i t just so happened to move a little more negative.”

And so has the media coverage. A recent article in Barrons, the financial publication, had this to say: “We like Dunkin’ Donuts coffee—the doughnuts, too. But the stock may give investors indigestion.”

“Their same store sales story is nuanced,” says Bryce Bares, owner of seven Dunkin Donuts in Nebraska. He points to K-Cups. “Last year we were selling K-Cups in our stores exclusively. When the grocery stores started selling Dunkin’ branded K-Cups too, that had a big impact on sales, particularly in an emerging market like ours. But that top line sales drop is deceptive because now we’re getting a profit sharing piece of grocery store K-Cup sales. That profit sharing piece does not show up on our top line sales. This year will be more telling starting in the 3rd and 4th quarter.”

One doesn’t need to look far across the QSR industry to see slumping sales. Losers include Jack in the Box, Shake Shack, Wendy’s and YUM Brands (which owns KFC, Pizza Hut, and Taco Bell). But, McDonald’s – which was nearly pronounced “dead on arrival” last year – has seen increases in both sales and stock value, thanks to its introduction of all-day breakfast. Same store sales at the Golden Arches jumped 5.7 percent in the 4th quarter of 2015.

“McDonald’s despite their problems has never fallen from the mid $70s, and now they’re up to $105 or $110. Part of that is due to them having a new CEO and the notion that the company is starting to find its way, with all-day breakfast being part of that,” says Gordon. “Dunkin’ is down generally because they had cut their earnings forecast twice last year. They also had a lot of international problems.” 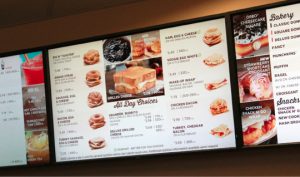 But, Dunkin’ isn’t sitting still while the competition heats up. The brand introduced a breakfast burrito to spice up its all-day breakfast offerings and introduced fully revamped menu boards at counters in all of its 8,400 U.S. restaurants and drive-thru windows.

Industry watchers were concerned that bright new menu boards would not only spotlight tasty Dunkin’ treats; they would also shine the light on calorie counts which are now required on all food and beverage offerings.

“Calorie counting is becoming more and more a part of life and people’s expectations on how they manage what they eat. I think it’s a sign of a progressive restaurant,” said Gordon.

Bares admits calorie counters are not having much of an impact on his customers.

“For most of our beverages, the number of calories is decided by the ingredients guests add to their own drinks. It’s less impactful on beverage based businesses like ours than it might be for McDonald’s, which derives more sales from its food. Let’s be honest, if you come in to get donuts, you know what you’re getting yourself into. We haven’t had a single complaint about calories since we instituted the new menu,” Bares says.

Back to Beverage and Breakfast Roots

In addition to an attractive cursive font, Dunkin’s new menu boards make it a point to remind customers that Dunkin’ knows beverages. Boards emphasize Dunkin’s multitude of iced- and expresso-based drinks and ignore combo meals, which took up 60 percent of the old menu board, but only represented a small percentage of sales. Boards feature bright images of Dunkin’s dark-roast coffee, lattes and Coolatta, while enticing shots of egg sandwiches jog the memory of customers that anytime is the right time to enjoy a Dunkin’ all-day breakfast item. 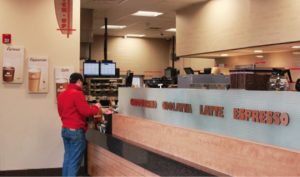 “We have a lot of competitive advantages that we lose sight of sometimes with our marketing. We can get lost in the product of the month, and I think there are times when it’s beneficial to remind people about how great our core business is, such as the infinite ways we can make a cup of coffee, and how we make every cup to order,” says Ken Blum, who operates a network of Dunkin’ Donuts shops in Ohio.

Bares believes Dunkin’s core strengths will carry the brand through this ultra-competitive period.

“We’ve been doing all-day breakfast forever, and we’ve been able to establish it as our identity. But at the end of the day, beverages are what people come to our stores for, so I think it’s wise of the brand to focus on innovating beverage options for the afternoon because I don’t think it’s something that McDonald’s is addressing; they’re focused on their food items,” he says.

Gordon believes Dunkin’ has the right strategy. “This makes sense because beverages are more profitable, even though if you get a coffee customer, you want to sell them something else at the same time,” says Gordon. “Nigel has told the press that Dunkin’ isn’t going to do dollar menus, which is generally healthy because that can ruin the brand quality. Sticking to what Dunkin’ does best is a good move.”

Both Bares and Blum say they haven’t seen a negative effect on their business since the institution of McDonald’s all-day breakfast.

“We were curious to see what would come of it. Sometimes you get a tailwind when your competition heavily promotes something you also sell, so we were wondering if it may actually help us or if we’d lose customers later in the day because of it, but in my network we haven’t seen either,” Blum says.

He adds that if Dunkin’ franchisees do the right things on their end, they’ll be successful. “If we give good service, offer great products, keep our stores clean, and stay fast we’re going to be successful. Executing on our side is the number one thing we can do when it comes to any of our competitors.”

Bares concurs, noting that Dunkin’s best move is to stay focused on its core product line and technology.

“By focusing on our beverages and relying on new innovations that are coming out like on-the-go ordering and other technological advances, I think we can drive our sales, and be much better off than if we try to create product lines that are outside of our comfort zone as an effort to try to keep up with competitors like McDonald’s,” says Bares.

Other Chains Push Back

Burger King: Added the Supreme Breakfast Sandwich and hot dogs to its menu.

Chipotle: Gave away burritos in February (if not in response to McDonald’s, possibly to repair its image after its food safety issues).

Jack in the Box: Gave away one million burgers to promote its new burger and announced upgrades to dozens of menu items.