This year’s NBA Finals had it all: a marquee matchup with big names and big-city audiences watching. As the Golden State Warriors captured their fourth NBA crown in eight years, Dunkin’ captured a lot of eyeballs through its investment in sports marketing and advertising. In the brand’s home court of Massachusetts, Dunkin’ was ever-present inside the Celtics arena, TD Garden. Dunkin’ hosted a Celtics pep rally at City Hall Plaza; popular Celtics guard Marcus Smart flashed his Dunkin’ inspired PUMA shoes on the court; and on social media, Dunkin’ was offering Celtics sweepstakes and giveaways. Visitors to the team’s Twitter feed saw this promotion: “Dunkin’s Irish Creme Flavored Coffee is here and with a bit of luck, you could score a $200 Dunkin’ gift card and a signed Celtics jersey.”

Did the Dunkin’ effort score points with basketball fans? Vassilis Dalakas, a professor and researcher of sports marketing and sponsorship at Cal State University San Marcos, thinks so. “Aligning a brand with a sports property can be helpful in many ways. One of the key factors is the strong passion that sports clubs and athletes evoke from fans across the globe. Through what is known as liking transfer, fans’ positive feelings toward their favorite athletes, and clubs transfer to the brands that partner with them and support them. As a result, fast food entities can connect meaningfully on an emotional level with fan bases around the world,” he says. 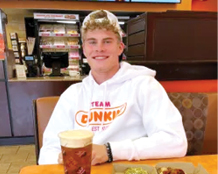 Over the years, and through different owners, Dunkin’ has been a consistent advertiser on local and national sporting events. Dunkin’ created its first national sports league partnership five years ago with the NHL (Hockey runs on Dunkin’). Dunkin’ Donuts has also been an official partner with the NFL’s Philadelphia Eagles and Dallas Cowboys; MLB’s New York Yankees and New York Mets; and the NHL’s Boston Bruins and Washington Capitals. Not to mention its sponsorships with regional sports networks.

Dunkin’ also recently signed with powerhouse college athletes to target Gen Z; Deja Kelly and Matthew Boling are Dunkin’s first collegiate name, image and likeness (NIL) partnerships. They are part of “Team Dunkin’,” which will continue to recruit new ‘teammates’ this year as the brand supports college athletes on and off the field. Kelly is a University of North Carolina sophomore and women’s basketball point guard; Matthew Boling, is a track and field star at the University of Georgia in his junior year.

Dunkin’ is far from the only restaurant brand to allocate a chunk of its marketing budget toward sports marketing and advertising. Food and beverage companies eagerly spend millions of dollars on professional sports sponsorships, associating themselves with athletes, sporting events and leagues. It is estimated the foodservice industry comprises 3% of deals globally and 5% of deals in North America, according to the London-based market research company Eurominotor International. McDonald’s, for example, partners with FIFA World Cup, the NFL and the NBA, not to mention the bi-annual Olympic Games.

Dunkin’ has lots of company when it comes to leveraging sport and athlete promotions as part of its marketing strategy. Euromonitor estimates the value of the U.S. sports market sector at $31.8 billion, including everything from live sporting events to food stands to media sponsorships to material goods. Sports marketing has always made particular sense for QSRs because “food service is closely related to sports culture through food being an integral part of the sports viewing ritual among sports fans,” says Egle Tekutyte, senior research analyst at Euromonitor International. “The ability of sports to create consumption occasions further reinforces the natural synergy that exists between sports and foodservice more broadly.”

It is difficult to quantify the exact return on investment with sports marketing and to qualify how much sports sponsorships and marketing efforts drive brand awareness and foot traffic. One study, conducted by Reveal Mobile in 2019 and 2020 found, “During a typical year, NHL sponsors don’t see a lift in foot traffic as a result of their sponsorships.”

And not all franchisees see the same benefit of sports marketing, especially among those situated outside the sphere of a local team. Definitive quantifiable outcomes for expensive sponsorship deals are hard to measure. Dan Lobring, senior vice president at the Chicago-based independent, sports and lifestyle marketing firm REvolution, says in the case where a QSR has a national deal, like Dunkin’s “official U.S. coffee, donut and breakfast sandwich of the NHL,” it is imperative for individual franchisees to look for opportunities to capitalize on the marketing with signage or local deals. “Sports fans are savvy, so the brands that are sponsors in sports have to be authentic and add value to the fans’ experience,” says Lobring.

What’s the future of QSRs in sports marketing? More and more restaurant brands are being proactive with emerging opportunities in sports, such as tapping into e-sports and sports gambling to engage younger fanbases. McDonalds, Chipotle, KFC, Pizza Hut and others are already active sponsoring either top e-sports competitions or some of the most successful e-sports teams. “Blending digital and physical experiences and tailoring offerings to different types of sports fans can heighten the engagement and consumption that brands are looking for,” says Tekutyte.

Dunkin’s playbook for sports marketing may also be valuable for Inspire Brands, the second largest restaurant company in the world. Fans and industry watchers should not be surprised one day if a baseball stadium somewhere becomes Sonic Field, or a hockey arena becomes known as Arby’s Arena. As Christina Young, client engagement owner at Dreambox, a digital marketing and advertising firm, puts it, “Sports fans are passionate, loyal thrill-seekers, allegiant to their teams and everything they stand for. Food brands benefit from the same type of fandom. Guests form long-term and emotional connections with food just as fans do with sports teams. It makes sense for food brands to tap into sports audiences who come together to celebrate their favorite teams and create brand affinity.”

We’ll cheer to that.