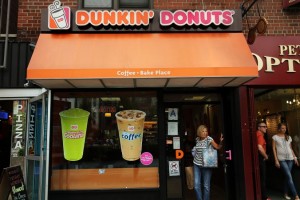 For the seventh consecutive year, Dunkin Donuts has more stores in New York City than any other franchised business with 536 shops operating within the city and its five boroughs.  Subway was the second most popular chain in the city with 468 restaurants.  Starbucks with 282 stores was in fifth place and McDonalds was sixth with 245 stores.