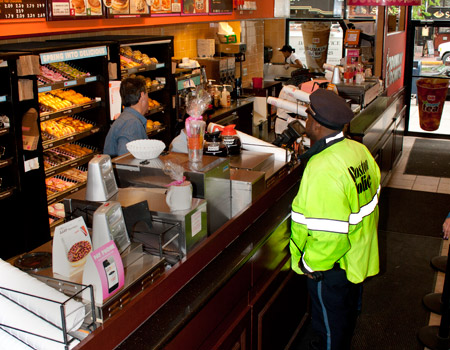 While most of greater Boston was locked down during a massive manhunt for one of the Boston Marathon bombing suspects, authorities allowed at least one business to remain open to feed first responders: Dunkin’ Donuts. Adjacent to the Watertown Police Department, the town’s Dunkin’ Donuts voluntarily provided free coffee and snacks to state and local police and others.  It’s fitting that just 20 miles from Dunkin’ Brands home base in Canton, Mass, the familiar “DD” was a banner of support as the city grappled with the heartbreaking aftermath of the marathon bombing.  And in Boston, Dunkin’ Donuts shops along the now infamous marathon route coped with the aftershock and uncertainty of business closures – when would they reopen? How would it affect business afterwards? And Dunkin’ Donuts employees and runners who completed the run or had to turn back were thankful for their safety but troubled by the horrific events. Independent Joe talked with two people in the Dunkin’ family who faced different obstacles on that fateful Marathon Day: the franchise owner of the shop just steps away from where the bombs went off and a franchise owner who was running his first ever marathon.