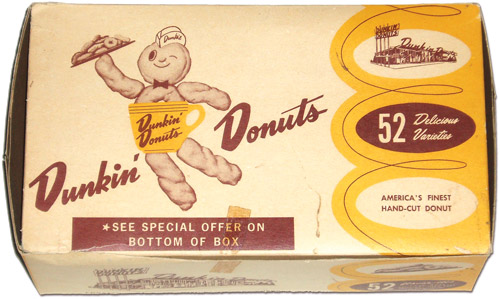 Oh, how times have changed. If Dunkin’ Donuts founder William Rosenberg walked into one of the world’s many stores today, he might wonder where he was. Instead of just fresh donuts and coffee, he could order a mocha Irish crème swirl iced latte with wake up wrap ¬– egg whites and turkey sausage only, please. And while customers sat around a horseshoe counter in his 1950s shop, today they can relax in cozy soft seating, while eyeing the digital menu boards. There would have been no artsy wall murals of coffee mugs or fresh sayings, nor relaxing music, or dimmer lighting – and no disposable cups.

But Rosenberg would have undoubtedly approved of the evolution of the Dunkin’ look, says Dunkin’ franchisee Victor Carvalho, 47, who owns the original location on Southern Artery in Quincy. “Rosenberg’s vision was always, ‘Do what you know, do it right, and do it well.” Carvalho recently completed a retro renovation of the store where the system was born. Of the more than 7,000 locations in the U.S., it is the only throwback Dunkin’ Donuts shop—echoing the time when milk cost 17 cents, when poodle skirts and sock hops were all rage.

The branding changes in Dunkin’s more than 60-year legacy hardly happened by circumstance or accident, according to Bonnie Riggs, a restaurant analyst with The NPD Group. “Dunkin has been successful in transitioning its brand from one of where you go for donuts to where you go for breakfast, coffee, and unique breakfast menu items,” Riggs says. “The chain’s brand image has evolved with this transition. They have definitely become a major player and a successful one in the QSR breakfast arena.” 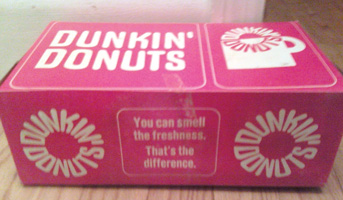 Dunkin’s coffee initially played a supporting role to its baked goods; after all, according to the Smithsonian, at the 1934 World’s Fair in Chicago, donuts were headline material, billed as the “food hit of the Century of Progress.” Dunkin’ shops initially embodied the blue-collar, working-man ethos of Rosenberg, offering 52 varieties of donuts. In the early days, a “fancy case” – a glass case for bakery products – showed off the daily specials of crème puff and strudels, while a felt menu board displayed prices – a dozen donuts for $1.49. The logo of the donut man – a cartoon with a donut head, holding a coffee cup and wearing an apron – was emblematic of Dunkin’s image as a dedicated coffee-and-donut restaurant. Customers could sit at the counter, enjoying a morning brew sipped out of ceramic mugs and saucers; it was a way of catering to the needs of the guests in a slower-paced era.

“Dunkin’ Donuts has a long heritage of excellent service for our guests,” according to Michelle King, senior director of Global Public Relations for Dunkin’ Brands. “In the past, that meant counter service where people could sit down and be served.”

And, although coffee played second fiddle to the donuts, Bill Rosenberg always knew good coffee was important. In her biography of the Dunkin’ founder titled, “Time to Make the Donuts,” author Jessica Keener wrote, “The coffee wasn’t selling, so Bill said, ‘Offer it for free. If they don’t like it, they don’t have to pay for it.’” But customers did like it, and paid for it as well.

In the ’80s and ’90s, as busy, dual-income suburban families juggled work, kids, and home, fast food and drive-through windows became as pervasive as Sony Walkman headsets. As older Dunkin’ shops were renovated, full-service counter seating was removed—replaced by takeout service. Customers fell in love with Fred the Baker, for whom it was always “Time to make the donuts,” and Dunkin’ continued its evolution to a food and beverage destination. The look and feel of Dunkin’ shops were tweaked: The largely pink and orange color scheme was toned down, including the signature white and pink uniforms being discarded in favor of more subdued beige. There was a menu change as well, introducing bagels in 1996, and then breakfast sandwiches; the cups and saucers were long gone. Even the menu boards, once simple wooden or felt panels, were swapped out for more efficient light boxes with photos and text that easily slid out for quick changes. All these updates, says global restaurant consultant Aaron Allen, were a strategic and methodical response as Dunkin’ refined its brand and messaging to not only stay in touch with the consumer, but to stay in front of the trends.

With the dawning of the new millennium, Dunkin’ started adapting to the nation’s health craze. The new slogan, “America Runs on Dunkin’,” not only reflected the on-the-go nature of modern society; it also suggested that coffee and snacks could keep a body fueled. With the introduction of the DDSMART Menu, the brand made a promise to consumers that they could find reduced calorie, reduced sodium, and reduced sugar alternatives. “The key to Dunkin’ Donuts’ continued growth is listening to our guests and evolving to meet their needs,” says King. “We know that our guests are increasingly health conscious, and are looking for a full selection of choices that satisfy their hunger and fit into their lifestyle. We have been steadily expanding our DDSMART menu, and we will continue to do so to provide them with even more options.” 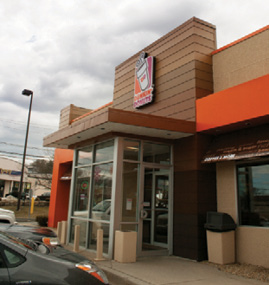 Another, more fundamental shift, follows America’s growing love of coffee. According to the National Coffee Association, the United States is the world’s largest consumer of coffee. Eighty-three percent of adults in the U.S. drink coffee, compared with 78 percent in 2012. This love of Joe, has not only stoked competition from Starbucks, McDonald’s and others, it has also validated Dunkin’s position as a beverage company. Even before the introduction of flavored coffees in 1995, franchisees had long recognized that coffee would drive the business.

Today beverage choices, along with menu options, continue to grow. “Over the last several years, we have created innovative products specially designed to be portable, including Sausage Pancake Bites, and more recently the Eggs Benedict Breakfast Sandwich. These items provide tastes that are familiar with a twist, allowing our guests to experience some of their favorite flavors no matter where they are,” says King.

Last year, Dunkin’ unveiled a new store design, the first in nearly seven years. The contemporary new look further establishes the brand’s coffee credentials—interiors incorporate more brown tones with coffee merchandising inside. The update incorporates many features to create a welcoming environment for guests to linger. “The restaurant look is increasingly important to younger millennial consumers who believe that older brands are where their parents ate,” according to Darren Tristano, an analyst at Technomic, a food industry research company. Newer contemporary décor packages generally impact important perceptions of cleanliness, quality. “Customers are willing to spend more at a restaurant that is more upscale because it is considered contemporary, Tristano says.

What does the future hold for Dunkin’? According to analyst Aaron Allen, the best franchise companies aren’t necessarily the ones with the coolest logos or the latest designs. “They are the ones with the strongest cultures and sense of community with a shared purpose and vision.” He applauds Dunkin’s logo changes, product updates and marketing revisions, but says perhaps the brand’s most significant move is its push to capture new markets—not just in the U.S., but also in the rapidly growing overseas markets.

“For all of the potential there is here in the USA, it must be said that any serious franchise company not looking abroad for growth opportunities is limiting its future. Dunkin’ has made brave pushes elsewhere,” which Allen says benefits franchisees as well as investors.

For the brand which was once touted as being “worth the trip,” Dunkin’ Donuts may one day say, “The world runs on Dunkin’.”