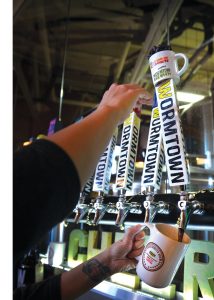 Senior executives at Dunkin’ Brands have, for the past several years, successfully brought new products to the market, with the hope of developing brand loyalty among younger consumers. The Dunkin’ mobile app has made the process of ordering a beverage and snack with a smartphone simple and reliable. Dunkin’s cold brew exposed customers to a more sophisticated flavor profile. But, perhaps the idea that resonated best with millennials, was the one that a franchisee came up with while watching young people walk into the neighborhood brewery for a different kind of cold one from the tap.

“At brand advisory council meetings, there had been talk of increasing the brand’s appeal to millennials,” according to Branca, who owns Dunkin’ Donuts locations in Massachusetts, New York, and Ohio. In fact, Dunkin’ collaborated with Catawba Brewing Company, a North Carolina brewery, in the fall of 2017 to create Dunkin’ Pumpkin Brown Ale, using cold brew coffee.

In Massachusetts, where Dunkin’ is among the top-rated brands, Branca saw the chance to create a new brew with a local brewer—and tap into the brand’s popularity for maximum publicity.

Three years after imagining the prospect, a crowd of mostly young people gathered for the inaugural pour of what would be the first beer made using Dunkin’ Donuts coffee. The sudsy beverage – brewed with Dunkin’ Donuts dark roast coffee – had a deep color and a sweet finish, and it satisfied the vision of something dark to brighten the winter sky.

Lighting up the winter solstice

For Branca, the first step was talking with the team at Wormtown Brewery, which had opened near one of his Dunkin’ shops in 2010. He asked them about the possibility of a coffee beer. Wormtown was enthusiastic about partnering with Dunkin’. 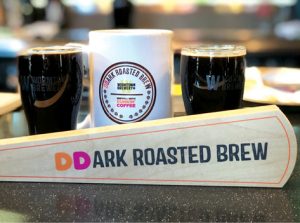 These collaborations are a lot of fun, that’s why we do them,” says David Fields, Wormtown’s managing partner. The brewery had previously developed a Pumpkin Pie Ale along with the nationally known Worcester-based pie company, Table Talk Pies. “That one was a great partnership and a great beer, [but] it didn’t rise to the level of media coverage that the Dunkin’ Donuts partnership did.”

Before going further, Branca needed brand buy-in. Early in 2017, he mentioned the coffee beer idea to former chief marketing officer Tony Wiseman, who was interested in doing a dark roast promotion. Wiseman liked the concept, and plans moved along quickly. Wormtown would craft a coffee beer using Dunkin’s dark roast coffee. It would available on draught at a ceremonial keg tapping held at Wormtown’s Tap Room at 11:28 a.m. on December 21, 2017 – the exact time of the winter solstice, which represents the darkest day of the year.

While uncommon today, winter solstice celebrations are a centuries-old tradition, and a way to recognize the day’s significance. To the two brands, however, the darkest day of the year seemed like a fun reason to cheer on the dark brews of both sorts, and to brighten up a day otherwise dominated by night. 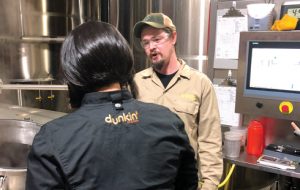 The birth of the brew

Coffee beer isn’t a new concept, but it is becoming more popular with the rise of craft breweries, which often turn to local sourcing and pair unexpected ingredients. Specialty brewers now offer beer infused with the flavor of oysters, chocolate and even pizza. Wormtown isn’t new to coffee brewing; they’ve worked with the flavor before, and previously teamed up with Worcester roasting house Acoustic Java for a smaller-scale endeavor.

Once the brewers at Wormtown received their shipment of Dunkin’ Donuts dark roast beans, they went to work quickly; the promotion was already in place for December and Wormtown had to deliver.

“The work and fine tuning comes during the brewing and fermentation process,” he explains. “[It’s] like your mother or grandmother tasting her famous sauce during the cooking—she just adds a touch of this or that along the way and it always comes out perfect. Personally, I think they nailed it.”

Once they had a prototype, Wormtown Head Brewer Scott Drake shared the beer with Heidi Curry of Dunkin’ Brands’ culinary team. Once they achieved the desired taste, production for the 14 inaugural kegs began. Each keg used one pound of Dunkin’ Donuts dark roast coffee.

In their press release announcing the brew, Drake described the beer as their interpretation of an English-style stout. “It has a heavier dose of chocolate malt and the grain build we used really brings out the Dark Roast flavor for a coffee-forward taste.”

The original batch was estimated to last about two weeks, but due to its incredible popularity, the suds disappeared in just a few days. And while there were some plans in place for bottling the beer – Branca says a label had been designed in anticipation – the logistics didn’t work out for this go-around. 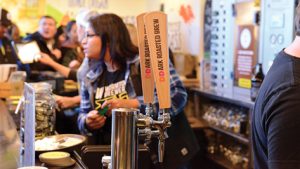 The party everyone talked about

On the day of the solstice, the light was shining on the city of Worcester. Beer and coffee aficionados from around the region eagerly awaited their first sips, and crowds were lined up at the door and on the patio for much of the unseasonably mild afternoon. Also plentiful: Dunkin’s double chocolate cake donut, which Curry described as a surprising, but perfect, accompaniment to the brew.

“DDark Roasted Brew has the same bold start and smooth finish that our guests love about our Dark Roast Coffee, so it actually pairs quite well with some of our bakery items.”

What started as a fury of local media and social media coverage blossomed into an international social media buzz. The Phantom Gourmet, a well-known New England food guide, hosted a Facebook live pre-event segment, which received over 39,000 views. Also feeding the fun was a specially designed Snapchat filter; in a press release, Weisman recognized it as “the first ever nationally animated Snapchat filter.” In total, the event received 712 million media impressions and ended up trending internationally on Facebook.

Inside the crowded tap room, guests enjoyed beer, donuts, and a lively atmosphere. The first 100 attendees received a co-branded swag bag of fun merchandise. A favorite item of the day was a coffee mug resembling the traditional DD coffee mug plus the Wormtown logo, which, after running through a brief checklist of ingredients, draws the conclusion: “this might be beer.”

A win for the city

An undercurrent of intensely local ties helped to feed the feel-good nature of the promotion. The city of Worcester maintains a warm place at the heart of Dunkin’ brands: in 1955, the first franchisee agreement was signed and executed in the city, and Worcester was the site of one of the first franchised locations. The beer at the center of it all came about as a collaboration between two well-loved Worcester-based businesses. Both Dunkin’ and Wormtown employ many Worcester locals, and Dunkin’s Heidi Curry is also a Worcester resident.

It seemed like a perfect opportunity to spread some love to the locals of the city. According to Branca, “As part of this special release, Wormtown Brewery and I will be making a donation to the Worcester County Food Bank. We’re humbled to be able to help our neighbors make the most out of the holiday season.” Branca and Wormtown presented a check for $11,500 to the local food bank.

A future for Dunkin’ beer?

While DDark Roasted Brew is gone, the coffee that inspired it remains plentiful and popular, scoring 4.5 out of 5.0 on influencer.com. Reviewers call it “the smoothest roast I’ve ever tried.” Others noted how the coffee “doesn’t taste over roasted, or over done,” and “its smooth taste is enough to wake you up in the morning, but also soothe you in the middle of a long work day.”

As for Branca, he couldn’t be more thrilled with the outcome.

“It couldn’t have gone better,” he says. “It was wildly successful, much better than anticipated.”

He encourages other franchisees to bring their ideas forward, stating that franchisees have been credited with great products. “The Big Mac, Egg McMuffin, Subway’s five dollar foot long – those were all developed by franchisees,” he says.

There are no immediate plans in place to continue the beer at present, but Branca says he’s hopeful, and expects to have more discussions down the road.

“We are constantly asked for more,” adds Fields.

For now, though, Branca does have one more message to pass along to his fellow franchisees: “Sorry, but I don’t have any more of it – the beer, the fun mugs,” he says with a chuckle. “It’s all gone.”