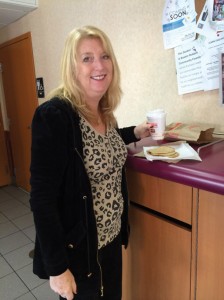 My morning workout is one of the few things I do for myself each day. The other is stopping at Dunkin’ Donuts for a healthy, low-calorie, breakfast on the way home,” says Sherri Horlink. The slender blonde, soccer mom from Natick, Massachusetts, enjoys an egg-white veggie flat bread sandwich when her busy schedule allows time for it.

Horlink is exactly the kind of customer Dunkin’ Donuts is courting—not just in New England, but across the brand’s growing footprint. The strategy is simple: Offer fresh, hot coffee paired with one of a myriad of choices at virtually any hour of the day

“Our current focus is and has been coffee. Traditionally people come to us for that first cup of coffee. People want coffee and breakfast together. That puts us in this space,” says Chris Mellgren, owner of Surfside Coffee Company, a Dunkin’ Donuts franchise group with a network that stretches from Miami to the Keys, and from Sarasota to Fort Meyers.

More than just a cup of coffee

Breakfast is the meal of champions, and there is plenty of competition for those morning meal dollars. In today’s busy world, where everyone is overextended, starting the day off right is about more than just a getting a good cup of coffee, it’s about getting an enjoyable breakfast at a reasonable price.

“Obviously there’s been a progression toward a healthier option—egg whites, low-fat turkey. We will continue to provide that as well as other options for customers,” says Mellgren. “The other trend we’re seeing, and Taco Bell is all over this, is portability of product. We are looking for more creative ways to come up with options, ways to create food you can carry with one hand while driving down the road—flatbreads and wraps, for example.”

Dunkin’ Donuts builds customer loyalty with its products, but there’s more to it than that. “Value, speed, quality, and convenience are the top priorities at Dunkin’ Donuts,” says Addison Ames, a former owner of 100 Dunkin’ Donuts/Baskin Robbins combo stores in Central Florida.

Mellgren agrees: “We are always looking to provide speed, quality and diversity of breakfast sandwiches. We are constantly rolling out new offerings on an almost quarterly basis.”

Consumers want a friendly face, healthy options, reasonable prices, a clean restaurant, and fast service—ideally, with a drive-thru window. According to Ames, 70 percent of sales take place at the window for franchises that have a drive-thru.

DDIFO Restaurant Analyst John Gordon, who is president of Pacific Management Consulting Group, agrees that the drive-thru option gives Dunkin’ Donuts an edge especially when those drive-thrus are open 24 hours—something conventional restaurants do not generally offer and many Starbucks don’t offer.

“At Starbucks—one out of every three coffee transactions has some food transactions added on. Dunkin’ Donuts has similar numbers, they just don’t track them. Part of the economic goal and motif going forward is to increase sales—once you have a store, rent and overhead to cover, you need to make money,” says Gordon.

Breakfast when you want it

“Lots of consumers look for a 24-hour-a-day option. The fact that Dunkin’ offers that gives the company a very unique place in the market,” says Ames. “It also helps that all menu items are available 24-hours-a-day.”

“People’s patterns are changing. The notion of very narrow eating times has ended for most people. People are working from home. Everything is dispersed every which way. Kids, especially, like breakfast food. Kids tend to be up later. Their time clocks are different. This trend to breakfast is big,” says Gordon who emphasized that being able to get breakfast all day is a plus.

Gordon adds, that McDonald’s, long known as the industry leader in the breakfast wars, is losing a lot of customers because they don’t serve breakfast after 10am. Even so, breakfast still accounts for 25-percent of all daypart sales for McDonald’s. Breakfast is the most profitable meal of the day for any restaurant, so the opportunity for increased revenues is huge.

“If you are interested in making money it (breakfast) is the place to be,” says Ames, now based in Orlando, FL, and working as the Director of Marketing and Communications for Barnie’s Coffee Kitchen. “There’s a lot of opportunity to expand with breakfast. Whenever we offered new or limited time products—sales went off the charts for that item.”

“As much as we like to think of ourselves as clever, we are not the only ones that have identified breakfast as profitable. Especially in Miami, but everywhere there is one of our competitors within a mile of us,” says Mellgren, who operated Dunkin’ franchises in the Washington, D.C. area before relocating to Florida a few years ago.

Options in product and location

Ames says that Dunkin’ Donuts does a good job of creating new and better products that consumers readily accept and are willing to pay more to purchase. He says that consumers vote with their dollars, and their money says breakfast is what they want.

New York City native Eva Kant waited years for a Dunkin’ Donuts to open in her neighborhood on the Upper West Side of Manhattan. A therapist who routinely walks to work, Kant says she makes a regular stop at DD in the morning. She loves the coffee and the various breakfast options. “I was happy to learn that Dunkin’ Donuts has a variety of breakfast choices,” she says.

With greater competition from other quick service restaurants and mom-and-pop shops across the country, Dunkin’ Donuts franchisees are always on the look-out for new opportunities to entice morning customers.

“We had the breakfast sandwiches. We would make combos with muffins, coffee, sandwiches, etc. We always tried to keep it under $5. We sold a lot of sandwiches. I did that on my own and built those areas,” says Kathy Anczerewicz, a former franchise owner in Chicago. She and her husband owned several Dunkin’ stores for more than three decades before retiring earlier this year and selling their last two restaurants.

“Going into more breakfast sandwiches is one way of reaching consumers. Dunkin’ always watches out for competitors,” says Anczerewicz, who found the battle for breakfast with McDonald’s extra challenging because the Golden Arches are headquartered in Chicago.

To beat the competitors, she says, she made sure to get involved – and stay involved – in her community, hiring local people to work in her shops and featuring community messages on her bulletin board.

According to the research firm NPD Crest, a leading global information company in Purchase, NY, U.S. consumers cut back on restaurant visits at lunch and dinnertime last year, but increased their visits at breakfast. It was the fourth straight year of that trend. There was a gain of three percent to over 12.5 billion for breakfast visits last year in the U.S. Fast food, which accounts for about 80 percent of total revenue for morning meals, showed the strongest increase at four percent.

After Dunkin’ Brands’ third quarter earnings report delivered a two percent increase in comparable store sales and year-over-year revenue growth of 3.4 percent, media reports cited pressure from strong competition in the breakfast and coffee environment as a chief cause of the brand’s failure to meet Wall Street’s expectations.

Bloomberg Businessweek wrote, “The only coffee and doughnut company that is having a solid year on Wall Street is Canada-based Tim Hortons – and that’s mainly because Burger King has agreed to buy it,”

Franchisees see competition for breakfast dollars wherever they look.

“Taco Bell is doing a good job with breakfast. Of course Denny’s has always had breakfast too,” says Anczerewicz, “Just look at the economy… people aren’t spending money. Fast food is what people can afford, so, everyone’s trying to grab that business. Plus, people are on the go. They want things quick, and they want quality. You have to give quality. I feel a lot of chains are going to look at breakfast. It’s the best area; it’s the most profitable.”

And of course, “coffee is universal and can be had at any time of day or night,” says Gordon. “It’s true that coffee companies and fast food restaurants do compete in the [4:00 a.m. to noon] daypart known as breakfast – McDonald’s, Burger King, Wendy’s, Taco Bell, Tim Hortons, Peete’s Coffee, and Tea Leafe – but the value of this market share extends beyond breakfast.”

Gordon says that leveraging affordable breakfast, sandwiches and snacks in addition to beverages, helps franchisees generate sales during traditionally quiet periods. “Breakfast enables a stronger 10:00 a.m. to 11:00 a.m. hour which builds up the lunch crowd—breakfast consumption has been rising, and is very well reported. In the restaurant space it’s the only daypart that is growing. Lunch and dinner are down. The reason is that there has been emphasis on breakfast. Breakfast also enables a more robust overnight presence—from about 2:00 a.m. to 3:00 a.m. people start to desire breakfast food. Overnight food offering becomes viable. Utilizing your asset again.” The goal, Gordon says, is to satisfy those customers so they return over and over again.

Chuck Fries, an east coast transplant who works as an engineer in Chandler, AZ, has become a Dunkin’ regular now that the brand has established itself in Arizona. Fries likes the options on the DD Smart Menu. “My family and I moved here from the Northeast for a healthier life-style. It’s nice to know that Dunkin’ Donuts is here too, and that healthy food options for breakfast and other meals is a priority for them as well.”