Introducing new donut and Munchkin varieties is an important way to keep excitement in the product line. Chocolate Butternut Munchkins are one of the popular new flavors, which CML operators say are helping increase sales.

On June 6, 2014 – also known as National Donut Day – customers flocked to their local Dunkin’ Donuts shop for a free treat. Giving away free donuts on the first Friday in June is a tradition that goes back more than 70 years. In the years after World War I, the Salvation Army established the recognition to honor those who served donuts to soldiers in the Great War.

“National Donut Day is a perfect opportunity to connect with our fans and celebrate the many ways donuts make any moment in a busy day much sweeter,” John Costello, President, Global Marketing and Innovation at Dunkin’ Brands said in a press release last year.

Look in the donut case of any Dunkin’ Donuts Brands and you’ll see old standards like the Glazed, the Chocolate Frosted and the Powdered Sugar. But, several times a year, new varieties like the Vanilla Peanut Butter Kreme, the Maple Frosted Cocoa and the Coconut Caramel are also carefully placed on pink paper in the case. Dunkin’ consistently introduces new donut varieties. Sometimes they are available for a limited time only; sometimes they become permanent favorites. In either case, the goal is to keep the category exciting and relevant—and drive sales.

“Donuts are timeless favorites, and are a great canvas for design and flavor innovation. Over the years, Dunkin’ Donuts has developed hundreds of varieties and flavors of donuts. Our fans really enjoy when we experiment with unique shapes and flavor combinations, and our commitment to donut innovation is a key reason why we remain the category leader, and why our donuts continue to be so popular in the market,” according to Michelle King, Senior Director of Global Public Relations at Dunkin’ Brands.

Dunkin’ Brands says it sells 2.5 billion donuts and Munchkins® a year. Baked goods make great anytime snacks and some Dunkin’ customers love a sweet treat with their coffee. When asked about donut sales, franchisees say they can differ by day-part, by season and by geography. People in the Southeast may see donuts as a special dessert for the family to share, while office workers in the Northeast may grab a dozen on their way to work to brighten the day for their colleagues. In either case, franchisees say, new varieties help catch the eye of donut aficionados.

“Generally speaking, remodeling and new product news are important sales drivers to the QSR space,” according to John A. Gordon, principal of Pacific Management Consulting Group and DDIFO’s restaurant analyst. “In the Dunkin’ environment, the introduction of many new manufacturing specs can produce challenges for the CML (central manufacturing locations) and for the shops that get new donut products.”

For franchisees and for operators of central kitchens, new products can require new baking and finishing procedures—as well as pre-ordering ingredients to make a lime green frosting or blue swizzle decoration. Sometimes that means allocating additional time for training and practice.

“It’s up to our plant manager to work on making sure end product meets specs and processes are followed. For new, somewhat unfamiliar varieties, we will usually institute a sample night just before roll-out. We’ll practice manufacturing the new varieties to make sure we get the processes and end product specifications just right. That way, we can ensure proper quality products the very first day new varieties are made available for sale to our member shops,” says Mark Dubinsky who operates a Level 4 CML, serving 94 Dunkin’ Donuts shops in two states.

In New Jersey, Jolanta Halicki and her husband Dariusz run a Level 3 CML that produces 5500 dozen donuts a week. The kitchen employs 50 people and all of them need to know the specs for all new donut varieties.

“We have a very good crew with many employees working with us for a long time. When they come up with new shapes, you have to spend time watching over all the processes like proofing and frying. It might take time to get the perfect shape. You have to watch carefully to be sure it’s made with good quality,” she says. 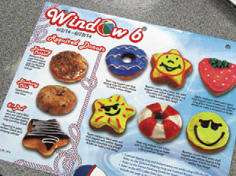 Dunkin’ Brands introduces new donut varieties several times a year. Many are variations on existing themes, but CML operators must ensure each new donut is made according to brand specifications.

One example of a recent limited time only (LTO) donut was the flower-shaped shell decorated with pastel pink or green icing and topped with a pink or yellow PEEPS® Marshmallow Chick.

“PEEPS are synonymous with fun and happiness, and we are excited to combine two American favorites to create unique flower-shaped donuts adorned with a marshmallow chick that will sweeten any spring or Easter celebration,” according to Stan Frankenthaler, Dunkin’ Brands’ Executive Chef and Vice President of Production Innovation.

The PEEPS® donut was a huge success. Franchisees say it gave Dunkin’ a “huge marketing pop” and created “vitality and excitement for the whole line.” Franchisees use words like “pretty and exciting” to describe how LTO varieties, especially those that bring new color schemes and shapes into the donut case, are a strong driver of donut sales.

But, at the same time, these varieties can also require additional labor at the kitchens and at the individual shops. The marshmallow chicks on top of the PEEPS® donuts, for example, were done by hand at local Dunkin’ locations. Some shops are better equipped to handle donut finishing on site than others.

As far as kitchens are concerned, Jolanta Halicki in New Jersey says keeping up with the new varieties and their procedures is not a problem, even at her Level 3 CML. “We just follow the same procedures for frosting and filling and cut the dough into different shapes,” and Halicki says the effort is definitely worth it. “New varieties help the business do better. We’re selling more donuts now than we have in the 15 years that I’ve been doing this.”

“We factor in a small drop in productivity for the first few days. As windows keep changing we know in the first few days of that window we are not going to have maximum efficiency,” Dubinsky says. “We are used to the change. It’s become the new normal.”

At the Advisory level, franchisees are intimately involved with the process to ensure new donut varieties will be well received and, hopefully, good sellers. The strategy of introducing new donut varieties has now extended to Munchkins. Popular donut flavors like blueberry cake and chocolate butternut are now being made as Munchkins to invigorate that category as well.

“It seems to be working; from a sales standpoint, it’s a 25-30% increase in sales by adding new vitality,” says Dubinsky.

Dunkin’s donut (and Munchkin) recipe seems to be working. New varieties like the new Blueberry Cobbler Donut, a yeast shell donut with delicious blueberry filling, white dipping icing and coffee cake streusel topping, which was introduced for this year’s National Donut Day, may wind up a memory next year. On the other hand, it might soon join the Glazed and Chocolate Frosted as a mainstay of a category that, despite its limited nutritional value, remains a surefire way to put a smile on someone’s face.