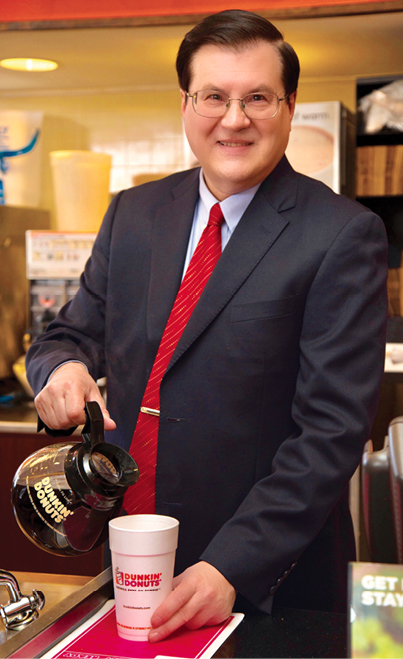 Ed Wolak was a teen when his mom applied for a job at a Dunkin’ Donuts in Manchester, New Hampshire.

“It was a new business to us. No one knew it was a chain,” says Wolak.

His mom worked part-time at the location for a few years, and encouraged her daughter to apply.

“My sister then got me a job as a porter. By then, my mom had left, but my sister and I worked together shortly before she moved on to other things,” Wolak recalls.

As the last Wolak standing, he stuck it out to pay his way through college. While he was working as a porter, the afternoon baker began showing him how to make hand-cut donuts. Soon, he began to assist the weekend night baker as a fryer.

“One day, the manager got a call from the night baker who called in sick. The afternoon baker who taught me told the manager, ‘Eddie can do it.’ The manager was surprised, but gave me a shot. After that, I had a job as a night baker,” recalls Wolak.

“I had a rolling pin and a piece of canvas in my trunk. Any of the franchise owners within a radius of 100 miles would call me, and I’d come in if I were available,” he remembers. “That was the time donuts were hand-cut. It took practice and manual dexterity to be able to make them efficiently.”

Still, at the time, Wolak planned to stay in the Dunkin’ business only until he earned his bachelor’s degree in business management. Graduation from Southern New Hampshire University would come in 1974, and then he planned to leave Dunkin’ behind.

“I was actually allergic to the dusting flour we used at the time. The only way I could get through my shift was to use a bronchial mist product to unclog my throat,” Wolak says.

Upon graduation, as he was planning to apply for other jobs, Al Goldberg, a Dunkin’ franchisee in Nashua, N.H., made him an offer he couldn’t refuse: he said he’d make Wolak a manager at one of his shops.

“I guess I did a good job because within six months he made me general manager for all three of his stores,” he says.

Wolak used everything he had learned working in various Dunkin’ shops, plus what he learned in college to make himself successful.

“When I started managing, I worked the schedules and the payroll and break-even points. The profitability of the first store went up.”

So did the second and the third. Soon, Wolak was ready to purchase his own store. 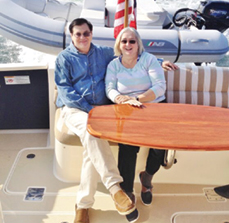 A network is born

After six months of managing three stores, Wolak purchased his first Dunkin’ in 1975 in Portland, Maine, staking an unusual piece of personal property for his business loan.

“I put my Porsche up for collateral, borrowed a few thousand dollars from a finance company and was in business on a shoe string,” says Wolak.

To keep expenses low, he worked as a baker on the day and night shifts, and hired his brother Bob to trade off weekend shifts. “I turned that store around. The previous year they lost $30,000 and my first year I made $35,000.”

Wolak hit a speed bump with the purchase of his second store, an existing Dunkin’ location in Westbrook, Maine, a suburb of Portland. At the same time, the City of Portland wanted the land on which Wolak’s first Dunkin’ sat to build a public park. He lost the site – and the store – to eminent domain. He was able to reach an equitable sale price with the city, and with the settlement money, he purchased a piece of land which included an existing Dunkin’ shop in Berlin, NH, at the edge of the White Mountains. Then, he returned to North Portland, and developed his first Dunkin’ from the ground up.

Decades later, having developed 14 Dunkin’s in northern New England, the Wolak Group expanded into upstate New York. Today, the company and its affiliates own and operate 96 Dunkin’ Donuts restaurants with four more in the pipeline, as well as a 21,000-square foot central production facility in Syracuse, NY, which produces and delivers donuts and baked goods to many of his Dunkin’ shops.

“A growing franchise owner needs to understand that you don’t manage five Dunkin’s like you managed one or 20 like you managed 10, and you certainly don’t manage 100 like you managed 20,” says Wolak. “It’s forever-challenging. One of the first things I learned in my business management classes is to get work done through other people. If you don’t have the ability to delegate or hire well and trust them until they prove that they can’t do the job otherwise, you’re never going to be able to grow a large network.”

As his business has expanded, Wolak has taken steps to help his employees, many of whom, he says want to grow with the company.

“I have many employees who have been with me from the beginning. One started as a porter before I bought my first store, and he’s still with me. He became a baker, manager and general manager.” 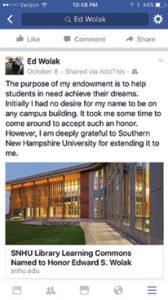 For the benefit of others

Syracuse University sits just south of old US Route 5 in this upstate New York city. Just a few miles to the east, along Route 5, which goes by the name Erie Boulevard, sits a former Krispy Kreme shop. It’s notable because this is where Wolak chose to build his company’s Career Development Center, a 2,000-square foot facility that also houses one of Wolak’s Dunkin’ shops.

“We built it this way so employees could get real world experience while getting trained,” says Wolak, who believes it is the only career development center of its kind in the Dunkin’ system.

It is a place where his more than 2,100 employees can seek mentorship and gain knowledge to keep them competitive in today’s workforce. It also serves, Wolak says, to educate the public about opportunities that exist generally within the quick service industry and specifically within the Wolak Group.

“The quick service restaurant industry has created lots of opportunities for individuals, but generally it gets a bad rap,” Wolak says. “Yet there are numerous examples of people who start in entry-level jobs and with mentoring and hard work they earn their way to top management,” including Wolak’s own director of sales, who started working the counter, then became a baker before being promoted to overseeing 45 locations in New York.

“We create pathways to success for people who are willing to seize the opportunity we have to offer,” he says proudly.

One of those pathways involves a free college education. When new employees are hired, Wolak gives them a flow chart explaining the job duties and positions within the company and a promise that after one year or 1000 hours of service, they can qualify for a promotion as a shift manager. Those positions include 100 percent reimbursement for enrollment into Southern New Hampshire University’s online degree program.

Wolak has never forgotten what he learned at his alma mater and is eager to give back so others can get ahead. He has established an endowment that generates scholarships for undergraduates, he serves on the university’s board of trustees and was recently honored when they placed his family name on its Library Learning Commons building. That was especially poignant because Wolak’s mother attended the ceremony in 2016, just a few months before she died.

“I’m a firm believer that education has made the difference in my life, and I want to pay it forward,” Wolak says. “You have to recruit people to work for you. There are a lot who can’t afford to go to college; who are jumping from job to job, and if they land with us, we try to be something for them that they can grasp onto,” he says. 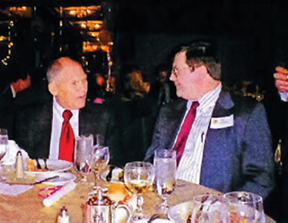 Kimberly Wolak is Ed’s only child and someone with whom he can share his company and philosophy. Kimberly grew up in the business, but sought other opportunities after college. She spent some time working in the film industry in Los Angeles, then the wine business in Napa Valley.

“I originally discouraged her from working for me out of college because it was a tough business then,” says Wolak. “‘When she moved back home it seemed like the perfect timing, though. She worked alongside me for about five years. Then she was promoted.”

The father and daughter duo share similar ideas about their business, as well as community outreach. They have established partnerships with local and national charitable organizations such as the Junior Diabetes Research Foundation, the Make-A-Wish Foundation, the Maine State Society for the Protection of Animals and more.

Additionally, they support efforts to reduce their carbon footprint, reduce and re-channel their waste stream. The effort has turned the Wolak Group into a “green” and sustainable business.

Through his former son-in-law, Wolak also got a taste of Hollywood. He was asked to serve as executive producer of a film called “Sugar Mountain,” a thriller set in Alaska and directed by the Australian director Richard Gray.

“This was definitely outside of my comfort zone, but a lot of fun to do,” he says of the film, which premiered at the Cannes Film Festival in May, 2017 and was sold to Screen Media Ventures for release in North America, the UK and Australia.

Having tasted the high-pressure world of Hollywood, Wolak is happy to relax on the island off the coast of Maine where he and his wife own a home. “We all need an escape from work,” says Wolak. “The place feels so far away, but it is actually fairly close; from Portland it’s a ferry trip away.”

His other great distraction is his classic car collection.

“I wanted a hobby that I could enjoy in my spare time that wouldn’t take much time,” says Wolak. “When I was a teen, I was at an auto junk yard and saw an old car whose front end had a pointed nose. It was a 1951 Studebaker. Years later when I saw that car at a car show, I bought it.” In fact, the latest addition to Wolak’s collection is a 1963 Studebaker Hawk GT, which was specifically built by the factory for the actor Alan Young, who starred in the 1960s television show “Mr. Ed.”

He also owns a 1991 Rolls-Royce and a 1965 Volkswagen Karman Ghia convertible. Then there’s the Porsche Wolak bought to replace the one he used as collateral for his first Dunkin’ shop and wound up selling because he couldn’t afford to keep it up.