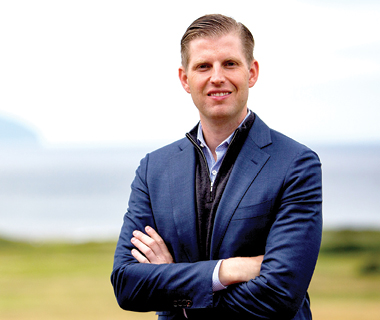 It’s not every day an independent franchisee association can announce the son of the President of the United States will speak at its annual meeting. But with the assistance of a well-known Dunkin’ Donuts family, Eric F. Trump has confirmed he will appear at the 2017 DDIFO National Conference.

“This is a wonderful honor for our organization and we are truly grateful that Eric Trump can join us for the National Conference,” DDIFO Executive Director Ed Shanahan says. “We wouldn’t have had the chance to even put in the request were it not for the Cain family, and Shaun Cain in particular, and his personal relationship with Mr. Trump. I can’t thank Shaun and his family enough for making this possible.”

At press-time, the schedule calls for Eric Trump to appear at the DDIFO Hall of Fame luncheon to address the attendees and help honor this year’s inductees, Carl Andrade, Jim Cain and Joe White. The luncheon will be held on Tuesday, October 31 in the Pequot Ballroom from 12:00 p.m. to 2:00 p.m.

Trump, who is 33, is Executive Vice President of The Trump Organization and is responsible for all aspects of management and operation, including new project acquisition, development and construction. A graduate of Georgetown University, Trump was once honored as one of New York’s “Most Important Young Philanthropists” by The New York Observer.

Among his many professional accomplishments, Trump is recognized for his efforts spearheading the growth of the Trump Golf Collection, bringing the portfolio from three properties in 2006, to 19 today. Among those is the Trump Turnberry resort in Scotland, which has been home to four British Open Championships.

“We know Eric is passionate about his work, but, like so many Dunkin’ franchisees, he is also passionate about his charitable efforts – in particular the tremendous work he does on behalf of the St. Jude Children’s Research Hospital. I expect he will talk with us in some detail about that part of his portfolio as well when we meet him at Foxwoods,” Shanahan says.