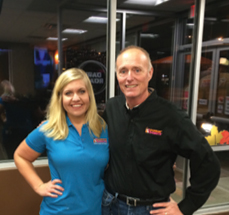 Doug Patterson’s franchising know-how is a culmination of many different experiences: from working on the franchisor side, to teaching the business at the college level, to being a board member with the International Franchise Association. Today, Patterson, with his business partner Cameron Stapleton, has become the largest Dunkin’ franchise group in Colorado, developing the northern part of the Rocky Mountain State.

Bringing the brand to a new region

Patterson’s career began in hotel and tourism, where he spent 25 years with the Windham Hotel Group, eventually serving as Chief Operating Officer. After leaving Windham, he designed a franchising course for the entrepreneurial program at the Coles College of Business at Kennesaw State University in Georgia. He taught the course for eight years, and was so energized by the students and speakers he worked with, he was eager to put his knowledge into practice. In 2014, Patterson and Stapleton set their sights on Dunkin’. Since Dunkin’ was already prominent in the south – Patterson’s home base – they looked elsewhere for a development area that could support growth.

“We liked Denver, but that was sold out, and so we looked at Northern Colorado, and settled on the Ft. Collins area,” Patterson recalls.

Dunkin’ had an earlier run in Colorado during the 1990s, but the brand largely disappeared from the rugged landscape, until the brand started its aggressive national expansion in the mid-2000s. The duo secured a three-store development agreement and opened their first shop in 2014; two more Dunkin’ – Baskin Robbins combos soon followed. A year later, after their initial shops began humming along, they opened two APODs. The first is at the 7,200 seat multi-purpose venue Budweiser Events Center in Loveland, CO, which serves coffee, hot beverages, munchkins, and ice cream. The second was a Dunkin’ – Baskin combo in the Power 2 Play sports arena, a multi-sport venue in Windsor, CO.

While east-coast transplants are always enthusiastic to see a Dunkin’ open up in their new neighborhood, Patterson says part of the challenge of moving west is introducing the brand to the community. Opening days are always an opportunity to help generate a buzz, and the Colorado stores celebrated with special events and giveaways. But opening day of the Loveland Dunkin’ turned out to be about much more than just a promotion. When Patterson and Stapleton learned that Jeff Huttinga, supervisor of the local construction company that was building their shops, was battling ALS, they wanted to help. The franchisees decided they would donate 10 percent of their opening day sales at their three new Dunkin’ shops to help offset Huttinga’s medical expenses. They set up fun activities to raise extra funds, including a “Dunk” tank donated by the construction company (with local schoolteachers in the hot seat) a Plinko game (right out of the “Price is Right” TV show) and other family-friendly activities. 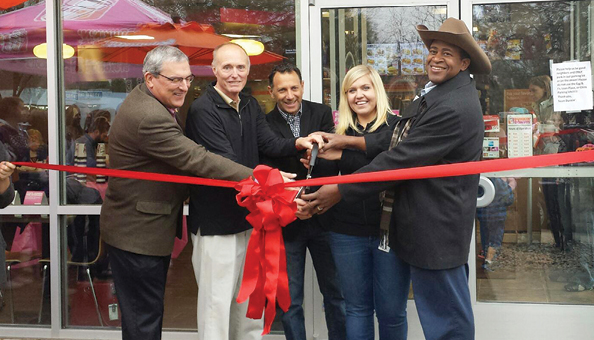 Raising recognition of the power of franchisees

Since its establishment in 1960 by Dunkin’ Donuts founder William Rosenberg, the International Franchise Association (IFA) has worked to promote and enhance franchising. During his two year position on the IFA’s board or directors, Patterson enjoyed the unique opportunity to lobby in Washington, D.C. on behalf of issues that affect franchising. The experience provided a wider view of the industry as a whole. He describes the opportunity as “eye opening” and one which raised his awareness of the incredible power franchising has on the U.S. economy.

“An initiative that we began, and that is still moving forward today, is to pull all franchisees together as a collective group,” to share common issues Patterson says. “Minimum wage, health care, immigration—we all share the same concerns, but the franchise industry doesn’t have the collective clout with lawmakers that it should have.” It is imperative that franchisees act together in their own best interests to leverage their potential clout. The IFA has tried to pull franchisees together on certain issues, and the Coalition of Franchisee Associations does so regularly.

This collective recognition also extends to the role that franchisees play in their local community. For example, he points to the common trend among shoppers to favor the small, independent retailor over a chain. “What isn’t often recognized is the positive impact that chains have on their local communities. For example, there’s the tax windfall; local shops don’t contribute the same kind of sales tax that we do,” he says.

While the Dunkin’ name may be new to Northern Colorado, the region’s love for coffee isn’t; over the past few years, the area has become rich with local and independent coffee shops.

“The challenge now is the number of new coffee competitors in the area. When we opened in Windsor three years ago, there were two grocery-store based Starbucks,” Patterson reports. “Today there are three Starbucks, a Human Bean, Ziggi’s, Dutch Bros, and some private label coffee shops. We experienced a drop in business as a result, no doubt.”

And, even with Dunkin’s “Beverage First” position, Patterson and Stapleton haven’t shied away from promoting donuts as well as coffee.

“We’re re-tooling and planning to compete more on the donut side, than on beverages,” he says, noting two upcoming spring promotions that feature donuts at center stage. The first is a buy one-get one promotion on a dozen donuts; the other offers two free boxes of Joe with every five dozen donuts purchased—a deal designed to appeal to Loveland businesses.

Drive-thru business is vital in Colorado with its harsh winters. Other coffee retailers feature drive-thru, but most don’t offer an On-the-Go option like Dunkin’ and Patterson says that represents a great opportunity for them to chisel away at established customer habits that drive customers to local coffee shop chains like Ziggi’s and the Human Bean.

Looking at the future

Patterson’s broad view of franchising makes him believe the next generation of franchise owners will bring their own fresh and positive ideas to the industry.

As for Dunkin’, Patterson believes the brand faces an ongoing challenge to secure its niche in an increasingly competitive coffee market.

“Coffee competitors command a higher price, but Dunkin’s recent beverage roll out points to beverage sales, but not higher prices,” Patterson says, asking, “[Where] does it fit into the coffee marketplace?”

Patterson is pleased with his team’s successful entry into a new region, and continued growth. Having now launched five Dunkin’ shops, he and Stapleton are always looking for their next opportunity. They already have their eye on possible development on the campus of Colorado State University. “When the opportunity comes along, we’ll take it,” he says.