John Motta’s childhood memories are soaked with sunshine and soccer balls. Steeped in the bayside community of Bristol, Rhode Island, where the DaMotta family settled (John later shortened his name), was a community of Portuguese immigrants. Soccer was their game and, for John, it became very personal.

“My father built the first soccer field in town, which is still there at Colt State Park,” he says of his father, John. “As soon as I was walking, I was on soccer fields with my dad.”

Soccer has remained John Motta’s avocation, throughout his successful career as a Dunkin’ Donuts franchisee. Beyond playing the game, Motta started refereeing in 1986, eventually becoming chairman of the Referee Committee for the United States Adult Soccer Association.

His involvement in soccer has opened many doors.

Two years later, he would attend the Super Bowl of soccer, the World Cup. “I was the official liaison and escort for President George Bush Sr, to three World Cup games,” says Motta, who has a photo with both the former president and the owner of the New England Patriots, Robert Kraft.

“Owning my own business has given me the opportunity to do these extracurricular activities and meet people all over the world,” says Motta. “It was a once-in-a-lifetime experience to be at the World Cup.”

Well, for Motta, it was twice-in-a-lifetime. In 1999, he again accompanied the U.S. Women’s Soccer team to the World Cup, and sat with former President Bill Clinton. It was the memorable World Cup where United States soccer player Brandi Chastain made a left-footed penalty kick to win the final game and then ceremoniously tore off her shirt.

“After the game was over, I remember walking with my wife and the president of the U.S. Soccer Federation around the field, taking it all in that our women were world champs,” says Motta. “I took a chunk of grass from the field where the penalty shot was taken.”

John DaMotta made sure to instill his love for soccer in his son. He also helped direct John into the family business. He had a family connection to Dunkin’ Donuts through his brother-in-law, Antonio Andrade. Antonio’s brother Manuel was the first Portuguese immigrant to enter the Dunkin’ system and DaMotta saw how the business was proving successful. DaMotta invested everything he had to buy his own Dunkin’ Donuts restaurant in Newton, Massachusetts.

Motta remembers when he was 21 years old and Dad pulled him and his siblings aside to ask what would be the defining question in his life. Did he want to go to work at Dad’s Dunkin’ Donuts shop?

Years later the scene was repeated when Motta – who by then owned 10 of his own franchises –asked his four children the exact same question.

“When my youngest was a senior in college, I sat them down and asked them if they wanted to pursue their careers or work for Dunkin’ Donuts,” he said. “Without hesitation they all chose to work for Dunkin.”

When it was his time, Motta knew going to work for his father would be hard, but he also knew the effort would pay off.

“I said yes to my father because I saw how successful my relatives were and how there was an opportunity to work for yourself, be a supervisor, and make decisions on growth and development,” Motta says, also recalling the challenges he faced getting his own network off the ground.

In 1985, Motta and his brother-in-law, Antonio Quintanilha, purchased one of his Dad’s four stores in Newton. “That partnership lasted only about a year,” Motta says, recalling how he wanted to be more hands-on at the store, but was spending most of his time in New Hampshire managing Dad’s shop in Nashua. It was 40-miles from the Boston suburb of Newton, a drive that could take two-hours on the area’s gridlocked roads. It wasn’t working.

They sold the Newton shop, and Motta ultimately went solo in 1987, buying his first franchise in Merrimack, New Hampshire, just 15-minutes up the road from Nashua.

“The store I purchased was not as busy as the one I was managing for my father, but it was still a good shop,” he says. “It had been the first Dunkin’ Donuts drive–thru in the United States.”

He next purchased his father’s store in Nashua. “When I was running it for my dad, it was like I owned it anyway.”

At the time, Nashua was a city of approximately 75,000 people and only had two Dunkin’ locations. “There was a lot of growth opportunity here,” he remembers. A local businessman approached him to develop a new store. “When you take over an existing shop, it’s an easy transition,” he says. “Developing one, getting plans done, and making deals with the landlord was totally new territory for me. I was very cautious because, again, I’d never developed a Dunkin’ Donuts from the ground up, but this store ended up being the best store I had volume-wise.”

Until now, Motta had not owned the land on which his restaurants sat, but that changed when he purchased a site to develop in Merrimack, down the street from his existing shop. “This one was different because now I would be the landowner, the landlord, and the Dunkin’ Donuts owner, so it was another new step,” he says. “Every time I opened up a new one, it was a new challenge, a new step in my career.”

As the family business expanded, Motta’s children were old enough to start working. “They would get up at 4:30 in the morning on weekends and learn the business,” he says. “I’m a believer that how you learn your lessons in life is by going out there and working.”

When it came time to question the kids about their careers, Motta already had the 10 New Hampshire locations. “I told them we could keep these and have a good life, but if we wanted to grow we would have to look for other locations outside of New England and they would run the stores,” he says. “They all said, ‘We want to grow, so let’s look outside of New England.’”

Motta contacted Dunkin’ Brands in 2006, and they offered him a chance to develop sites in South Georgia, Jacksonville and the Florida Panhandle. He decided to pass on those locations, hoping for something further up the coast. Not long after, the operator of a six-store network in Virginia Beach put his stores up for sale. Motta and his son bought the network, but soon found out how developing in a new territory can lead to unexpected trouble.

The Motta family agreed to open 40 new locations in Virginia Beach over a seven-year span. As he remembers it, “That was almost like opening a new store every other month for 7 years. It looked easy,” he thought in a good market. “But then we got hit with the market collapse and the banks’ collapse and a big recession.”

Still, the Motta family moved ahead. They opened six stores, which John Motta describes as “the biggest Dunkin’ Donut dumps that I had ever seen. I told Dunkin’ Donuts they should have been embarrassed to have their name on those buildings.”

They were financing remodels when suddenly the bank cut the credit line. “I’m in Virginia Beach with all this debt, buying these locations, a store is under construction, and all of a sudden the bank tells me, ‘I’m sorry, but we have no more money for you.’ I had no way to get money.”

It was troubling to say the least. Motta recalls the sleepless nights when and his wife Maria wondered if they would lose everything. It was clear the situation in Virginia was desperate, so Motta and his accountant contacted Northern Bank & Trust in Massachusetts. Dunkin’s stability in the region was an important factor in the bank’s decision to refinance Motta’s debt and make cash available.

At the same time, Motta and Dunkin’ Brands agreed to reduce the number of stores that would open during this contract cycle—going from 40 to less than 20, which he calls much more manageable.

“What I learned is don’t overcommit yourself with so many locations because you don’t know where the future lies. It takes one little storm to put everything you worked for at risk.”

Over the years, Motta has been active in the Dunkin’ system. He serves on the Brand Advisory Council and is co-chairman of the development sub-committee and a member of the government affairs committee. He is also chair of the DDIFO Hall of Fame committee.

“What I love about working for Dunkin’ Donuts is that there’s always a challenge,” he says. “What’s the next big thing?
Where’s the next location I’m going to build? What’s it going to look like?”

His development agreement ends next year, but Motta says he’s already told Dunkin’ Brands he would like to sign another. “If I sign an agreement, it protects my area and allows us to continue to grow,” he says.

Motta doesn’t show any sign of slowing down, in his day job with Dunkin’ or his sideline work with soccer. “I’ve played soccer all my life, so it’s in my blood. You can’t take it away from me and you can’t get it out of me.”

Motta was recently elected president of the United States Adult Soccer Association and sits on the board of the U.S. Soccer Federation, the governing body of all soccer in the United States. His recognition as a national soccer official was highlighted again after the U.S. women’s team won their third World Cup.

“I was invited in 2015 to visit President Obama at the White House after the women won the World Cup again,” he says. “I’ve met three presidents because of my soccer career.”

His favorite part about being involved in soccer, he says, is the people he meets and the friendships he’s made. “There’s absolutely nowhere in the United States I can’t go to that I can’t find some really good friends to meet up with,” he says. “Those are everlasting.”

It’s a sweet sentiment from a man who appreciates what he and his family have built. And he celebrates that every day when he indulges in his favorite sweet: a jelly donut.

“Every day, for 36 years I’ve eaten a jelly donut and had a coffee in one of my Dunkin’ Donuts shops,” he says, relishing the taste. 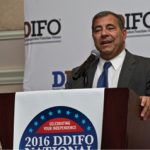 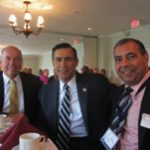