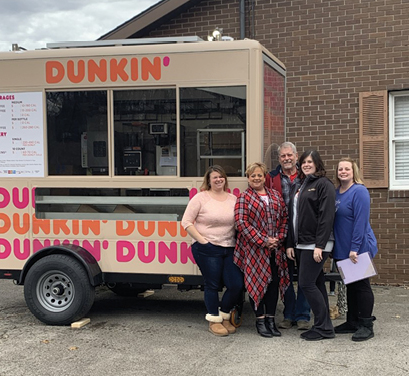 When Don and Annette Miller opened their first Dunkin’ Donuts 40 years ago in western Pennsylvania, they never anticipated it would be the first of a network of successful family-run stores. Franchising wasn’t even part of the young couple’s plans at the time, but when Don lost his job unexpectedly, they heeded the nudge of a family member to pursue their goal of owning their own business.

Annette and Don journeyed to Massachusetts to attend Dunkin’ Donuts University, then returned home armed with the basics they needed to run a successful operation. “It wasn’t difficult, just follow the rules. The wheel had already been invented,” Annette recalls. “We took what we learned, and applied it.”

While business operations came easily, the Millers faced a bigger challenge. The couple’s first shop was not, one might say, in great shape. In fact, that would even be an understatement. “We needed to change its reputation quickly. [That was] by far our biggest challenge,” Annette recalls. “It was a fixer upper, broken on so many levels, [like] a blue haze, smoke-filled dive bar. There were bikers, pick-ups, you name it. It had a bad reputation. No decent female would patronize the store after dark.” By the time the Millers bought the store, two different franchisees had already attempted to turn it around, but they failed.

With their six month-old daughter Leeanne in tow, the couple set to work repairing the store’s physical appearance and improving its community image. They drew on what they already knew, their own family values. It is what guided their actions, their decisions, and their hiring.

“Within a matter of months, the community changed their attitude. Sales and guest counts doubled within six months, and it became the highest volume store in the Pittsburgh market,” and remained so for many years, Annette says, recalling how her family’s hard work and attentiveness paid off. Their district manager at the time dubbed the franchisee duo his “biggest success story.” 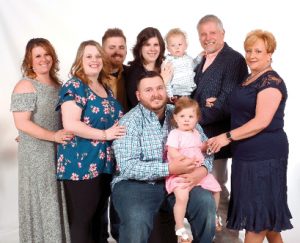 With their shop humming along, Don Miller took a position with Dunkin’ Brands as an Operations Specialist, learning a different side of the business. Annette, meanwhile, ran day-to-day operations. The couple’s calm seas turned rough, however, when Dunkin’ took over the Mister Donut chain and converted the shop near the Miller’s store. Sensing possible erosion to their market share, Don implemented a solution he’d helped roll out in Philadelphia while working for the brand: selling his Dunkin’ baked products to area convenience stores.

“Branded products was a company roll out that allowed us to deliver donuts to over 75 convenient stores in our area. At one point, we had three midnight delivery drivers taking the product out,” he recalls.

The move boosted business and, when the owner of the former Mister Donut shop nearby decided it was time to sell, he contacted the Millers. “We were very blessed that they reached out to us first, and we bought it,” says Randi Griffith, Annette and Don’s middle daughter who is now the company’s director of marketing and guest relations. It took more than three decades for the family to add a third location, and by then the next generation of Millers had ignited their desire for growth.

Don and Annette had three daughters, whose Dunkin’ memories reflect the changing times. Leeanne and Randi, the older girls, learned to make donuts by hand in their restaurant kitchens. By the time younger sister Taylor came of age in the business, donuts came from a central manufacturer. All learned how to serve the customer and nurture the business. The prestige of the job also evolved. When Leeanne was in high school, the family business wasn’t something she chatted about with friends, but, 15 years later, Taylor’s friends nod their approval upon learning her family runs Dunkin’ shops.

The family business is uniquely personal for the Millers, as they have named their company for each family member: DALRT (a letter from each first name). They say it represents their strong family values—those which they relied on to transform a down-and-out location to a shining gem and which still guide their business endeavors.

As each daughter grew, she held different jobs within the restaurant, learning the ropes and assuming greater responsibility. They also learned the Dunkin’ business through their mother’s experience. Annette served on the Regional Advisory Council for nine years, and the Pittsburgh ad committee for 11 years.

By 2015, the second generation of Millers began collaboratively managing the day to day tasks of their store. In 2017, the trio built their first store in Grove City, PA—about half way between Pittsburgh and Erie. Around the same time, Dunkin’ was offering ownership and development rights in Erie, a lakeshore city of 100,000 people. “There were a bit of nerves throughout the family, [but we] knew this move was important,” Randi says. Ultimately, the Millers took over two existing stores and have the opportunity to develop seven new locations.

A Trusted Team, a Welcoming Community

The Millers know they couldn’t have made it this far without a strong team behind them. Don and Annette learned long ago that good employees are priceless. The family is dedicated to hiring and training top notch employees, then guiding their growth. It is one of the rewards that comes with operating your own business. A core component, says Randi, is making sure that both the crew and management team feels valued. That is nearly 170 people to whom the Millers make a commitment. “When they feel valued, they’ll easily pass that along to the guests,” she says. In return, they’ve been proud to see their team members bond with the community.

“Our most-cherished employee milestone was with our longtime employee, Ruthie,” who retired at the age of 80, after 25 years of service, as Don recalls. At the time, the Pittsburgh community embraced Ruthie’s send-off. “There was a write up in our local newspaper, and many community members – and long-time regular guests – came to say their goodbyes.”

Recently, another long-tenured employee – this one a member of the Miller team for 40 years –retired and left behind colleagues who have racked up 10, 20 and 25 years of service. “We feel proud that we have been able to offer a career to so many amazing people,” says Randi. Their pride extends to their younger workers, who come to Dunkin’ on their way to college or other adventures. Recently, the Millers launched a scholarship program to provide something extra for those workers.

And, when COVID-19 struck, the Millers stood by their employees—and their community. “Our family is truly thankful that we were able to stay open with drive-thru service, provide steady jobs for our employees, and continue to serve our community.”

Bringing in the New

Always on the lookout for ways to improve their stores and better serve their community, the family has embraced some new ideas. One of which is the Dunkin’ Go, a mobile food trailer ready to serve DD coffee and bakery treats anywhere. After seeing the Go presented at the National Dunkin’ Convention in Las Vegas in 2018, the family didn’t hesitate to sign up, and became one of the first franchisees in the country to own a Dunkin’ on wheels.

“We’ve used it to generate excitement on our Meadville property prior to the build, which was extremely successful,” Randi says. “Our first year [with it], we brought in over $55,000 in revenue. Our most successful event last year was our local fair.”

The Millers were also happy adopters of the Just Baked on Demand (JBOD) platform, which enables them to deliver a fresh baked bakery product within an hour, “JBOD has most definitely been a game changer for the brand. This has allowed us to put our focus towards guest service and really drive the business operationally,” Don says.

As Don and Annette have eased into retirement, Leeanne, Randi and Taylor have each assumed leadership roles in the business. Leeanne is CFO and Director of Development; Randi is Director of Marketing and Guest Relations; and Taylor is the Director of Human Resources. The sisters not only work together, they also live in close proximity to one another. It is an arrangement admittedly prone to jangled nerves, but, staying true to their family values, they have found ways to make it work.

“It definitely gets difficult. The absolute best thing we’ve done? Counseling!” Randi shares. “We would highly recommend any family business to pursue this from day one. Counseling and improved communication helped smooth out distractors so we could each focus on working together for the best needs of the evolving business.”

And while the third generation of Millers might presently be more interested in Munchkins than employment, the family hopes they’ll too reap the benefit of being raised in a family-run business.

“There is such strong value in working with family. We hope to instill good work values, without entitlement, to the next generation as well,” says Don.

“Our success was based on hard work and people skills, [and] we have raised our daughters to have the same qualities,” says Annette. “Bad things happen to good people. You pick yourself up, dust yourself off and keep going.”