The eateries must comply with a California law that takes effect Jan. 1, 2011. 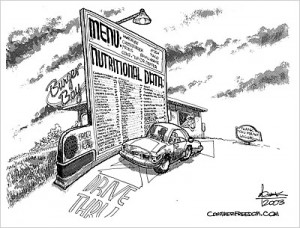 Jerry Hirsch writes in the Los Angeles Times that Fast-food restaurants are pondering how to deal with a new California law that tells restaurants to make more nutritional information available to customers.

For now, eateries must make brochures with calorie counts and other nutritional information readily available. In 2011 they will have to post the information on their menus and menu boards.
Panda Express, the Rosemead-based chain that dominates the Chinese food segment of the quick-serve market, is trying to get ahead of the curve. It just introduced what it calls its Wok Smart logo and menu.

The idea is to prove that the owner of more than 1,200 fast-food outlets has healthful eating options among its fare. The Wok Smart logo identifies 18 side dishes, entrees and appetizers that contain 250 calories or less per serving. The logo is displayed where the items are listed on Panda Express’ menu board, on its nutritional brochures and on the chain’s website.

The items aren’t new offerings. They are regular Panda Express menu choices. What’s different is that the chain is now actively directing consumers to its more healthful selections.

“We want to help our calorie-conscious guests take the guesswork out of planning their meals at Panda Express,” said Glenn Lunde, the chain’s senior vice president.

Panda Express says its two-entree plate of mixed vegetables, black pepper chicken and broccoli beef is 540 calories. That is about 27% of a daily 2,000-calorie diet and includes the five daily servings of vegetables that nutritionists recommend, Lunde said.

California was the first state in the nation to require chains to provide more nutrition information. But the requirement could go national.

In May, Sen. Tom Harkin (D-Iowa) and Rep. Rosa DeLauro (D-Conn.) introduced the Menu Education and Labeling Act, called the MEAL Act. The bill has the support of many consumer and health groups that believe it will help people make more informed choices about the nutritional content of the food they are ordering.

Other chains are also planning for when menu labeling is the law in California and nationwide.

Even armed with more nutrition information, many Panda Express customers are still likely to order the orange chicken: The company sells 45 million pounds of that entree annually.