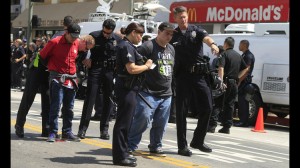 According to national news reports, fast food workers, joined by SEIU members, and other activists and protesters engaged in civil disobedience to draw attention to their efforts to force unsustainable increases to minimum wages around the country.  Media stories, such as this one from the New York Times and this from the LA Times, seem to vary widely on how widespread the protests were and what the depth of participation was.  Interestingly though, in the NY Times article referenced above and in a host of other reports, the Service Employees International Union (SEIU) is reported to have spent “more than $10million” on the ‘Fight for $15″ initiative.  In reality however, according to research by the Workers Center Watch, that figure is actually greater than $38 Million!   The push by SEIU to increase their membership ranks on the backs of franchise owners across the country will be one of the topics that will be addressed at this year’s DDIFO National Conference on Wednesday morning, October 22, when we will have Franklin Coley addressing the conference.  He is the campaign director for the Center for a New Economy and an expert on SEIU and other union tactics.  He recently presented “The New Face Of Labor Activism: Restaurant Owners Under Siege” to the Coalition of Franchisee Association Board meeting in Minneapolis and it is exceptional.  There is a whole underbelly to the SEIU effort and it behooves us all to be completely aware of their effort.