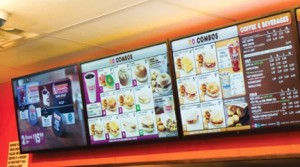 Between 2007 and 2013 McDonalds added five dozen new items to its menu, bringing the total number of offerings to 145. The brand was following the long-established tenet that new choices keep a brand relevant and exciting. Then during an earnings call this year, McDonalds Chief Operating Officer Tim Fenton changed direction. “We need to do fewer products with better execution.”

That thinking has started to permeate the industry, punctuated by this recent comment from Chipotle Founder Steve Ells, “The gimmicks that have driven the fast food sector for years—dollar menus, limited-time offers, and merchandising partnerships—are not producing results like they used to.”

Brands are noticing. According to data compiled by Datassential Menu Trends, U.S. restaurants are now offering slimmer menus. In 2014, the average U.S. restaurant menu had just under 93 items, after reaching a peak of nearly 100 items per menu in 2008.

One outlier is Starbucks, which has bulked up to 255 products, raising questions about whether the new product offerings
are gumming up the works behind the counter. Starbucks is working hard to improve efficiency so “people aren’t waiting in line,” Chief Operating Officer Troy Alstead told the Wall St. Journal. 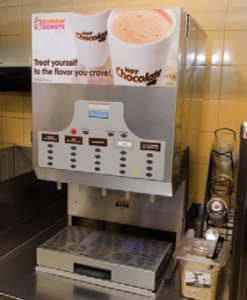 Have it your way

Earlier this year, Burger King changed its famous slogan from, “Have it Your Way,” to “Be Your Way.” Burger King has had trouble keeping pace in the growing burger market (which may explain why it bought Tim Horton’s). And, this slogan shift may send the wrong message to the 18-34 year olds who make up the highly sought after Millennial Generation. Their buying habits indicate they definitely want it their way.

According to Rob Branca, who serves on Dunkin’s Innovation Task Force and is the chair of the Northeast Regional Advisory Council (RAC), one of Dunkin’s advantages in the marketplace is the ease with which they can cater to a customer’s wishes. Sugar or no sugar; sausage or bacon, cream or skim milk; French roll or croissant; turbo or flavor shot? When you think about it, Dunkin’ Donuts is the place to “have it your way.”

Crew members are trained to customize how a beverage or sandwich is prepared, but the process can still be a challenge. Branca estimates there are over a thousand choices of drinks and sandwiches.

“Our guests have learned that they can design their own beverages and sandwiches, mostly without any extra charge whatsoever, and that is powerful,” says Branca. “The trick is to make sure that we can manage that behind the counter as we develop new products for our guests, and that is hard work.”

That’s one of the factors that determine whether an item will stay on the menu or fall off.

“It can be a tricky proposition,” says Ken Blum, an Ohio franchisee who also sits on the brand’s Innovation Task Force and chairs the Profitability Subcommittee. “If you put ten franchisees in a room and ask them what should be cut from the menu, you’ll probably get ten different answers. Everybody has a different sales mix in their market.”

Blum says a group of franchisees, working with the brand, routinely examines sandwiches, snacks, beverages and even donut toppings and cream cheese flavors to decide which products should stay and which should go. It’s a necessary exercise, he says, to reduce consumer confusion, operational complexity and supply chain issues.

“When you do a menu analysis, you have to look at a product’s percentage of sales as well as the number of sales use incidents,” says John Gordon, principal of Pacific Management Consulting Group and DDIFO’s restaurant analyst.

“LTOs are a huge competitive advantage when properly executed. People love trying new things, particularly our younger guests. We have to be mindful not to introduce too many of them at same time or too close in time to one another. That’s where some brands get it wrong,” Branca says.

According to Gordon, the lifecycle of the typical LTO is six to seven weeks in today’s fast changing world of consumer products. “That’s because the marketplace keeps moving.”

Gordon says, in general, sales for a limited time only product will peak on week four, then cool off. Some buck the trend—like the Big N’ Toasted and the Wake Up Wraps, which earned a permanent place on the menu after successful LTO launches.

But, earning permanent status is not the primary goal of an LTO item, as Dunkin’ CFO Paul Carbone explained in a 2013 interview with QSR Magazine. “The importance of the LTO is that it’s given me permission to talk to the consumer, more so than the actual dollars the item gives us.”

Gordon agrees, menu choices matter. “New product development is a best practice for franchisors and Dunkin’ does a good job of testing new products and using data to drive decisions,” and he says Dunkin’ understands consumer trends so they can answer the question: “Who is the audience and what do they want? Is it an initial purchase or is it an add-on transaction?”

In general, those decisions match what Dunkin’ customers want and expect from the brand, unlike Starbucks which has expanded its evening menu to feature, among other things, truffle macaroni and cheese and white wine.

“We are trying to deliver to guests what they want, when they want it. We feel we can be an effective competitor in all day parts where our guests are looking for us,” says Branca.

In the delicate game of menu balance there are always going to be winners. For every Big N’ Toasted, there’s also a serving of McDonald’s Mighty Wings. Typically, it’s the customer who decides and sometimes they make the choices very simple. Other times, brands have to wrestle with the decisions.

“If it was easy to manage the choices and the speed, every other brand would be able to do it well. That’s clearly not the case,” Branca says.