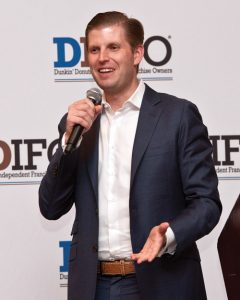 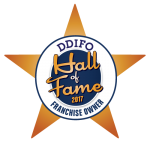 The first thing people may have noticed when they walked into the ballroom for this year’s DDIFO Franchisee Owners Hall of Fame luncheon was the Secret Service agents guarding the door. They were joined by members of the Connecticut State Police and the Mashantucket Pequot Tribal Police Department. The heavy law enforcement presence was in place to guard the event’s special guest: Eric Trump, the second son of the President of the United States.

This was the 7th year DDIFO has held a celebration honoring the achievements of franchisees (and others close to the Dunkin’ Donuts system) who have left a lasting impression on the brand, and it marked the first time a member of the nation’s First Family was present for the festivities. This year’s honorees, Carl Andrade, Jim Cain and Joe White are all well-established, admired and well-respected within the Dunkin’ community

The Cain family operates a network in New York and Connecticut, and Shaun Cain, Jim’s younger son, has a long-standing friendship with Eric Trump, who welcomed guests and posed for photos before making remarks to kick-off the event.

“It’s an honor to be here. I actually brought my better half,” said Trump, the Executive Vice President of The Trump Organization, who was joined by his wife Lara. Through his foundation, Trump is a major supporter of the St. Jude Children’s Research Hospital in Tennessee. Since 2007, the Eric Trump Foundation has raised over $7 million to support the Memphis-based pediatric facility that cares for the sickest children in the world, often waiving the costs to families that are unable to pay. 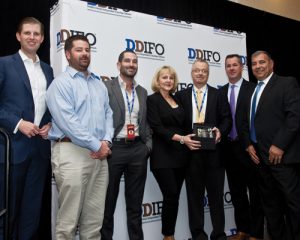 In addition to acknowledging the contribution Dunkin’ Donuts franchisees make to the national economy, “Look at the amount of jobs this group has created, the career opportunities you have all given to so many people,” Trump also wanted to highlight the support the Cain family has provided to St. Jude’s, which began with a “Give to Live’ initiative Cain started at his New York DD shops and raised $50,000 in its first year. The Cains later broadened the fundraising effort to include hundreds of New York and Connecticut Dunkin’ shops. The effort earned Shaun Cain Dunkin’s Philanthropist of the Year Award.

When it was time for Jim Cain to step up and receive his Hall of Fame award, he joked that he was “at a loss for words,” an ironic twist given that those who know Jim Cain, know him to be comfortably talkative.

“Being honored by my peer group is the ultimate honor because I am you and you are me, and we are together,” Cain said. “We come from same narrative. We come from nothing. Some from Portugal, some from India, some from different parts of the world. I came from Providence, RI; my dad was a cop. [We had] six kids in the family, so I came from nothing too.” 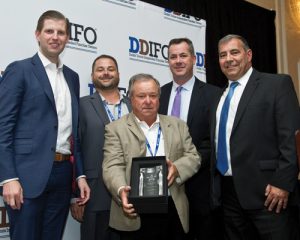 Carl Andrade came from a family of Dunkin’ Donuts franchisees. By the time he was old enough to have a job, he knew it would be in a family Dunkin’. In 1975, he got his first job at his brother Tony’s shop in Holbrook, Mass. and bought his first shop in Manchester, NH in 1977. Carl was 24. Like many of the franchisees in the Hall of Fame, including Carl’s brother Manuel, he has made a name for himself in the system as a hard worker, a supporter of his community and a volunteer on advisory committees and subcommittees.

“I’m proud to be up here and to be part of this great organization. It shows everybody – especially for young guys out there – that hard work pays off,” Andrade said as his voice cracked, visibly impacted by the emotion of the event.

Joe White came with his family from Ohio to be recognized for his excellence in the Dunkin’ Donuts system. White first got into the donut and coffee business when he bought a Mister Donut shop in 1978. Later, when Dunkin’ Donuts absorbed the Mister Donut chain, White stayed in and expanded his network. Over the years, White has been actively involved in franchisee business and served two years on the board of the Joy in Childhood Foundation when it was known as the “Community Fund.” 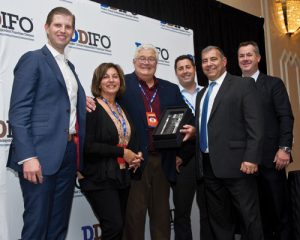 “Dunkin’ Donuts buying Mister Donut—we went through all that. That was the best thing that ever happened to me. I didn’t realize it at the time. [Dunkin’] was a far more vibrant company with far more vibrant advertising and it allowed us to grow,” White remembered. “We went from one store to 23 now and [my son] has probably doubled it in the last 5-6 years. I’m very happy to pass the baton on to him.

“I am very honored that my peers have chosen me to be in the Hall of Fame,” he said.

There are now 29 men and women enshrined in the DDIFO Franchise Owners Hall of Fame, a testament to the hard work, dedication and commitment that has made the Dunkin’ brand renowned the world over. And now that’s something that America’s First Family knows firsthand.