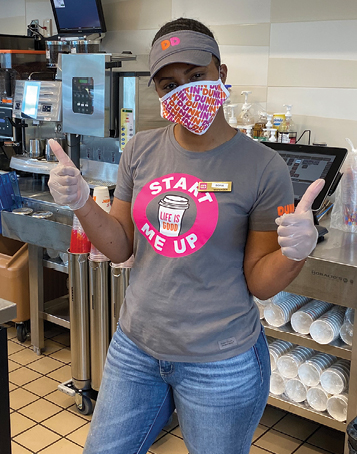 The restaurant industry – and particularly the Quick Service Restaurant (QSR) industry – is facing many challenges, among them finding and retaining good, reliable employees. It’s no secret that restaurants have an extremely high turnover rate with employees flowing through the revolving door. Data compiled before the coronavirus pandemic, showed employee turnover ran as high as 150 percent for fast food restaurants.

When COVID-19 began spreading and states started issuing stay-at-home orders, fast-food restaurant workers were considered “essential.” Most QSRs remained open, offering drive-thru and curbside delivery only. Some – particularly those without drive-thrus – had to close altogether.

For those that remained open, the virus created a new set of issues for restaurant operators. They had to cut jobs, or cut hours; they had to institute new safety measures and ensure customers – and workers – that they were safe. The new “safety first” culture that emerged from the pandemic meant that franchisees had to more delicately balance the fears of their workforce with the pressures of running a business in trying times.

Still, some fast-food restaurant employees resisted returning to work—fearful of the unknown and uncertain they could really protect themselves from infection. During the early days of the pandemic, employees at McDonald’s spoke up about inadequate safety protocols including a lack of available personal protective equipment. In May, McDonald’s workers from four Chicago area restaurants filed a class action lawsuit against the company over its response to the coronavirus.

According to the complaint, “McDonald’s [failed] to take adequate steps in response to the pandemic.” The Chicago Tribune reported, “The complaint alleges the restaurants did not implement 6-foot social distancing in the cramped kitchens and did not provide adequate personal protective equipment to employees.”

Dunkin’, meanwhile, has been broadly praised for placing an emphasis on the health and safety of its employees and customers and for consistently communicating its stance on safety, reopening and more. 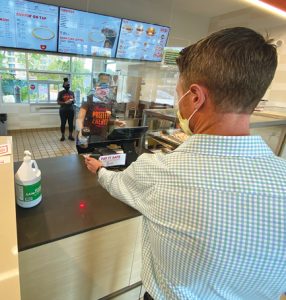 “Our number one priority has been – and will remain – the health and safety of our employees and customers,” according to Stephanie Lilak, Vice President of Human Resources at Dunkin’ Brands. “All Dunkin’ restaurants have implemented enhanced safety measures in accordance with temporary brand standards as well as CDC and state guidelines.”

Once those measures were instituted, franchisees had to step in and help their employees confidently shift to a new way of working. For one franchisee group, this represented a unique challenge. Before the pandemic, the Wolak Group, with its network of Dunkin’ shops in Maine, New Hampshire and New York, had already established itself as a model for employee retention and training within the Dunkin’ system. Like so many other things, that effort was impacted by COVID-19. This magazine is among many publications that have reported the wide acclaim the Wolak Group earned for its career development center, a 2,000 square-foot facility that is attached to one of the group’s restaurants in Syracuse, NY. By investing in their employees – through additional training and reduced college tuition – the Wolaks have been able to control their employee turnover rate. They also earned a lot of trust from their people.

“We know our people are our most important asset and critical to our success,” says Kim Wolak, chief operating officer of the Wolak Group. “Without them, we have no business, and this is definitely true during the time of COVID-19.”

Before the pandemic, employees of the Wolak Group could take certification programs to qualify for shift manager, assistant manager and restaurant manager positions. The development center also offered classes on things such as multi-unit leadership, how to interview and how to select good job candidates. Now that the circumstances have changed, Wolak and her team have invested in empathy to support their employees. It was easy, she says, because the company shared many of the same concerns about coronavirus and keeping their families safe. When some employees chose to stay home and collect unemployment, Wolak stayed in close contact so when her workers were ready to come back, they could.

Two of the Wolak Group’s restaurants were forced to close when the pandemic hit because of their locations—one was in a transportation center, the other was near a college. The company cut its workforce by 20 percent, which Wolak admits was less than she anticipated.

“To help offset the reduction in hours and as a way to say, ‘We appreciate you,’ we instituted premium pay of [an additional] $2 per hour for everyone very early on,” says Wolak. The move also helped convince people who were receiving additional benefits through the Federal Pandemic Unemployment Compensation program to stay on the job.

As time went on, Wolak worked with her HR, Operations and Training teams to come up with a plan on how to adapt to the quick-moving environment. They scheduled people in teams so employees wouldn’t be concerned about getting too close to too many different co-workers. They also implemented different training protocols to ease the strain on store managers who had to maintain appropriate staff levels, manage morale as well as look out for their own well-being.

Wolak also worked closely with Dunkin’ Brands, once the landscape shifted from “shelter in place” to “reopening.” According to Lilak, Dunkin’ rolled out new initiatives to help franchisees fill immediate hiring needs “including recruiting and on boarding tools and resources [and] facilitating best practice sharing,” which she described as the brand’s effort “to support our franchisee’s immediate hiring needs, and developing enhanced materials for franchisees to train and onboard their employees.”

Wolak agrees these steps helped take some of the pressure off the new hires and allowed the franchisee to pick the learning path that would best fit the restaurant’s needs at the time. “We are at a point where morale is good across the board, and with the streamlined processes and a focus on fundamentals for an efficient drive-thru, our employees know what they need to do,” she says.

With unemployment now at record levels as a result of the pandemic, Dunkin’ announced an initiative to hire 25,000 workers to help staff the 90 percent of its restaurants that are now open. In conjunction with this initiative, Dunkin’ Brands is launching its first-ever advertising campaign touting the benefits of working at their restaurants, titled “Dunkin’ Runs on You.”

The brand also followed the Wolaks’ lead and introduced a partnership with Southern New Hampshire University (SNHU) where franchisees can offer their employees a low-cost, online college education and a pathway to an associate or bachelor’s degree. Ed Wolak is a SNHU graduate and established a reimbursement program for his employees, years before the outbreak.

With waves from the pandemic still undulating across the country, the Wolak Group is keeping its focus on those programs that will help her employees. The Wolak Wellness Program, for example, was developed last year to support the mental health of company employees and is undergoing a review and update this summer. Wolak says an important takeaway from the past several months is the need to improve as a result of the pandemic experience. Her team is documenting the steps they’ve taken since March.

“This whole experience was not for nothing,” she says. “It’s important to me to be able to look back at what we did and the decisions that we made to make sure they were the right ones. And if they weren’t, understand what we would do differently next time.”