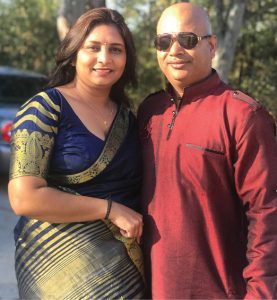 Since emigrating from India at the age of 15, the QSR business – and more specifically, Dunkin’ Donuts – has played a central role in the life of Paras Kayastha and his family. From working as a high-schooler at Burger King, to taking a stake in a Dunkin’ location on the South Side of Chicago before graduating college, to owning and operating multiple locations in the suburbs, it’s been Dunkin’, his family, and the relationships he has developed along the way that have been the cornerstones of his life.

“There’s no secret to success in this business,” says Kayastha. “It’s working hard and maintaining relationships in the right way, because if you need help and ask the right person to help you, they will help you and guide you.”

That has been the blueprint he has followed since he came to this country nearly three decades ago. In July of 1991, his father obtained a visa to move his family from India to the U.S., but passed away unexpectedly a month later. Soon after, Paras, his mother and younger brother Kiran came to the U.S., and moved in with his uncle, who had immigrated to the Chicago area in 1970.

His mother went to work in a Dunkin’ Donuts in downtown Chicago, and Paras and Kiran took part time jobs at a downtown Burger King while attending high school. Paras soon worked his way up from the broiler to cashier, and stayed downtown through most of high school before landing a job at a location closer to his home on the Northwest side.

By the time Paras entered college, the family had save enough money to buy a home of their own. He earned a promotion to part-time assistant manager at Burger King while attending college. “The manager saw something in me, so he started training me and providing me with guidance in running the various aspects of the store, and he became a kind of a mentor,” says Kayastha.

Eventually, Kayastha received a lucrative job offer from Menards, a home improvement store with hundreds of locations throughout the Midwest. He worked there part time while continuing full time studies towards his engineering degree at DeVry University. In 1998, his life took another significant turn when he returned to his childhood home in the town of Vadodara (state of Gujarat) to meet the woman who would become his wife, Gayatri. “It was arranged for us to meet, and we really liked each other, so we just got married,” says Kayastha.

Paras and Gayatri returned to the states. Now a married man, he had more responsibility, which meant taking a full time job while continuing to work part time towards his degree. He signed on selling electronics at Circuit City before landing a position as a circuit designer at Lucent Technologies. Although he enjoyed the work, the company was going through a difficult stretch. It was during this time that his mother – who was still working for Dunkin’, convinced him to come back to the QSR business. Using a home equity loan, the family purchased a 30 percent share in a store in the South Side of Chicago with two other partners, including John Bozich, who owned over two dozen locations at the time.

“[My mom] loved Dunkin’ Donuts, and she enjoyed working there. She told me, ‘we have a chance to own something, so let’s do it.’ And we did.” It was also a move that was based on experience.

When the family had lived in India, they operated a seasonal retail business, selling fireworks and novelties for Diwali (a festival that celebrates the beginning of the Hindu New Year) as well as other religious holidays. That experience showed Kayastha’s mother how business ownership was a path to financial security.

Jumping back into the QSR world with both feet, Kayastha tapped his already-extensive retail experience from Menards, Circuit City and Burger King to assume the role as store manager in a relatively short time. With his brother stepping in to help manage, Kayastha tackled several tough challenges on his way to growth and prosperity.

In 2004, a family friend approached Kayastha and told him of an opportunity to purchase two Dunkin’ stores in the suburb of Addison, about 20 miles outside of Chicago. The family cashed out their share in the South Side location and, with help from the same uncle with whom they had lived when they first arrived in the country, purchased the Addison franchises. Paras became the franchisee, and brother Kiran – who had graduated with a degree in entrepreneurship and finance from DePaul University – become store manager.

As a franchisee, the level of responsibility immediately escalated for Kayastha. “I had to go to Boston to learn how to make the donuts at Dunkin’ Donuts University, then I had to go to Phoenix to learn about the ice cream and cakes (for the Baskin Robbins portion of the store) and then to Chicago for two more weeks to do my training for Togo’s (a sandwich shop which Dunkin’ owned from 1997-2007),” says Kayastha. Gayatri accompanied him for the training as she prepared to play a major role in their new business.

At the time the Kayasthas took over in August of 2004, the Addison stores were not performing well; the West Addison store was grossing approximately $7,000-$8,000 per week, and the East Addison location around $12,000. They immediately set out to improve those numbers. “We started by concentrating on operations,” Paras Kayastha says. “Brand [operations managers] were always very supportive. We were driven by the opportunity that we had.”

Step one was to reduce serving times. The brand standard for serving a drive-thru customers was approximately 150 seconds; service for front counter customers was 120 seconds. Kyastha’s times were considerably higher. “We realized that that was just too long for a guest to wait just for a coffee,” he says, so they started experimenting with repositioning crew members to improve efficiency. The move began paying dividends. Drive-thru and counter times dropped steadily until they were cut in half, and sales numbers increased accordingly. Over the course of eight years, Kayastha estimates, sales grew from $8,000 per week at the West Addison store to $20,000; sales at the East Addison store doubled to average $24,000 per week.

“We learned who was better where, and began assigning that station to them,” says Kayastha. “If someone was a good order-taker, then they were there every day. If they were fast at making coffee, that’s where they were assigned. There was a lot of trial and error, until we began to master [the positioning strategy].” Gayatri led the operational improvement process, taking techniques learned from those who best performed their tasks and incorporating them into the training. She now handles all manager training.

In 2008, Kayastha approached a long-time franchisee and fellow Indian emigre Ashok Pandya, for whom his mother had worked when the family first came to Chicago. Pandya owned multiple stores in the Greater Chicago area and Kayastha approached him with the idea of developing a partnership. Pandya agreed and the pair purchased two stores in Bensenville and Schiller Park. Kayastha was now managing four stores within a 10 mile radius.

As his business grew and prospered, Kayastha sought to get more involved in brand operations. In 2011, he was elected to the board of directors of the Midwest DCP. “It was an amazing experience,” Kayastha recalls. “I think I was the youngest in the group at the time, and I learned so much from a business perspective of how large companies operate from the senior group.”

Shortly after he joined the board, the Midwest DCP was folded into the new National DCP.

Kayastha then began serving on the marketing subcommittee for Baskin Robbins Midwest, where he learned how marketing and advertising funds are spent to maximize ROI for franchisees. Later that year, he sold his stake in the Bensenville and Schiller’s Park locations in order to purchase a full-stake in two new stores – at Villa Park and Downer’s Grove, just west of downtown Chicago – which he and Gayatri operated.

A health scare punctuated the family’s success at the time. Paras developed gout, which was so painful he had trouble even walking. His condition flared just as his wife was giving birth to their third child. “Instead of me helping her, she was helping me, because I could barely get out of bed,” he recalls.

He discovered that his condition was being exacerbated by the chilly Chicago winters, so he sold 75 percent of his shares in three of his locations to friend and fellow franchisee Bud Patel, and moved the family to Florida. The change in climate, diet and exercise routines brought him back to health. That rekindled his entrepreneurial spirit. Unable to find a Dunkin’ location to purchase, he instead bought a Ramada hotel franchise in Davenport, a suburb of Orlando. “The first year I had a management company, and watched what they did closely, so after a year I began running it myself,” says Kayastha. “It was not difficult, just a different product. Instead of donuts and coffee, it was rooms.”

He has since fully regained his health (“1,000 times better than it was”), and in May of 2019 returned to Chicago after selling the Ramada Inn. He purchased a Best Western in St. Charles, Illinois upon his return, and told us he was in the process of buying back his ownership stake in the three Dunkin’ locations he had relinquished to Bud Patel.

Reflecting on his experience as a franchise owner, Kayastha says he and his wife owe their success to a few basic principles, including leading by example, practicing what they preach, and following the standards of Dunkin’ Donuts. But the guiding principle, he says, has to be treating customers the best they can. “Our concept has always been – since I bought the stores in Addison – to call and treat our customers as guests. And that concept has stayed with us.”