Black, with cream. Or without cream. With sugar, without sugar. “I drink my coffee any way. I drink the mistakes,” laughs Sonny Ho. There are some who say a person’s coffee order reveals a lot about their personality. In the case of Philadelphia franchisee Sonny Ho, it couldn’t be more accurate. Ho built his career embracing one word, sacrifice—not just for rescuing mistakes from the trash, but also for his willingness to do whatever it takes to be successful. “I made the donuts. I made the muffins. I did the cleanup. I made a lot of sacrifices.” Those sacrifices have paid off and now Sonny Ho is on a mission to pay it forward.

Ho, who is Chinese, was born in Vietnam and emigrated to the United States when he was 13. His parents had left six years earlier, leaving Ho to live with an uncle. “Six years. We were separated for six years,” Ho says somberly. When they were finally reunited, the family settled in Philadelphia, where his father got a job as a watch repairman. Sixteen-year-old Ho turned his attention to his high school studies and the family bought their first house in Philadelphia’s Juanita Park, a working-class neighborhood. It many ways, it’s a familiar storyline of the immigrant experience and the pursuit of the American Dream. For Ho, the dream, plus a $30 thousand mortgage and a Fred the Baker look-alike, put him on a path that led him right to Dunkin’.

“It’s funny, the house we bought was from an elderly gentleman. He was a good man. He actually looked like Fred the Baker,” laughs Ho. This near-double of the character famously portrayed by actor Michael Vale was, in fact, a real baker who was working at a Dunkin’ that had just opened down the street. “I asked him if I could have a job. I needed to help my family because we just bought the house and we had a lot of debt,” Ho recalls. “That’s how I ended up working for Dunkin’. That’s how I started in the system. Now I own that store.” 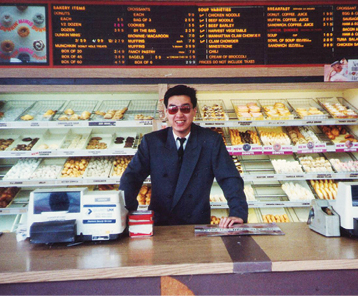 The store is in the Erie-Torresdale section of Philadelphia, less than three miles from the Betsy Ross Bridge, just north of Center City, and not far from Ho’s family’s home. He was hired to work after school as a porter, or janitor. “It was the 1980s and most every Dunkin’ at the time had a porter,” Ho explains. “I was cleaning up the kitchen, mopping the floor and taking out the trash.”

Ho made about $100 a week and says he was grateful for it, but he wasn’t satisfied just doing the cleanup. He was also always watching and learning. “At the time, the baker also made the muffins. He saw me watching and said ‘you want to do this?’ I don’t know if he was lazy, or what,” Ho recalls with his easy laugh. “But I started helping and he taught me every step. So, I started making the muffins, and then other things, slowly. And the boss noticed.”

The boss gave him a job at the counter. “So, I was going to school during the day, working as a porter on the weekends and the nightshift after school. We couldn’t do that now with the labor laws,” Ho acknowledges. “But that time was different and you could, and I wanted to help my parents out.”

Just as his boss was noticing his hard work, his teachers were, too. Ho was enrolled in the Parkway Program, an experimental Philadelphia high school program. “In 11th grade, they sent me to take college classes. In fact, for 11th and 12th grade, I took most of my classes at the community college. I am very grateful to my teachers. Very grateful to the Philadelphia School District.”

By the time Ho received his high school diploma, he already had keys to the store and a title of Assistant Manager—essentially managing the business when the owner was out of town.

“There is a funny thing I always remember. We would never discuss how much I would get paid.” Ho recalled. “So, the boss says ‘Sonny, how much should I pay you?’ He didn’t ask how many hours I worked. And I was working 15 to 16 hours a day sometimes. I said, ‘You pay me whatever you want to pay me,’ because I didn’t want to take advantage.”

Ho continues, “He said, ‘Sonny remember this. You are learning to do business at my expense. You’re here to make decisions and every mistake you make is at my cost. Maybe you should pay me.’ It’s true. I kind of learned how to do business, how to manage a business, at his expense.” 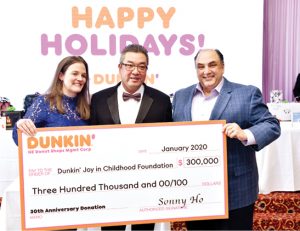 That conversation had an enormous impact on Ho. In fact, when asked what kind of advice the now 50-year-old CEO would give his younger self, he draws on that exchange. “I would say don’t be afraid of people taking advantage of you and don’t complain about your work. If you take a job, don’t only think about how much you’re going to get paid. But ask how much you can get from that job,” says Ho. “You are actually learning how to do business, without having to pay for the business. That is very important, more important than the pay.”

Ho’s high school grades earned him a full scholarship to Temple University. By then, he was managing four Dunkin’ locations. He hired his parents to work with him and he had a deal with his boss that put him on a path to ownership. But he decided to take a break from work during his senior year so he could focus on his studies. The move gave Ho time to consider another possible career path in technology.

Ultimately Ho came back to Dunkin, lured into a management position with Philly’s largest franchise owner Billy Hong. Six months after he was hired, Ho became partner. That was 1995. Today, he is the CEO of that franchise network, which includes 44 stores in Philadelphia, including the newly-minted Next Gen store in Erie-Torresdale, where he started.

Ho credits Hong, his three current partners and their nearly 1000 employees for the company’s success. “Mr. Hong, our founder, created a legacy. We are good partners, we respect each other, which makes it harmonious. We have dedicated employees and managers who treat our stores like their own. I am grateful for them all.”

Ho’s wife Alice is part of his team, which features many employees who have been with them for so long, they have watched them get married, have families and send their children off to college. Now, some of those children are company employees. Nearly all of their managers are promoted from within and their average tenure is an impressive 10 years. They are rewarded with a bonus system based on years of service, and celebrated at an annual company holiday party. Ho is proud of his employees and their commitment to his stores.

“We are bound to our community. Everywhere you go, everyone you meet, it could be an employee or it could be one of your guests, you don’t know how they will become part of your life,” Ho says. “I consider this my hometown. My partners and I, we built our American dream here. We are grateful to be here and grateful for the support of our neighbors.”

Ho regularly demonstrates his gratitude through charitable gifts to the communities that support him and his business. He is well known throughout many Philly neighborhoods for his generosity. For every new store they open, the company makes a donation to a local charity. At the height of the pandemic last year, they also donated thousands of dollars in masks and other protective gear to Philadelphia area hospitals.

A short time ago, he started thinking differently about his donations. “I know many franchisees make donations like me, but now we have the Dunkin’ Joy in Childhood Foundation. I thought, why don’t I make the donations through them?” It’s an idea that exemplifies Ho’s business credo, brand before self.

Ho brought the idea to fruition with a $300,000 donation, the largest one-time franchisee gift the foundation has ever received. “Sonny has always been very generous, and this is an incredible donation,” says Victor Carvalho, a Dunkin’ franchisee and Dunkin’ Joy co-chair. “He believes in what we’re doing so strongly that he has committed for three years, which is incredible.”

Ho had just one request, that the foundation consider the Philadelphia school district as an initial recipient. “I owe the school district a lot and it feels great to be able to give back. Education is one way to get out of poverty, but this is more. I look around now, with the pandemic, and there are families with no food in our community.”

Because of Ho’s donation, the Fund for the School District of Philadelphia was awarded the first distribution of $100,000 for their Meaningful Meals program. The program provides families facing food insecurity with a healthy food supply and nutrition counseling.