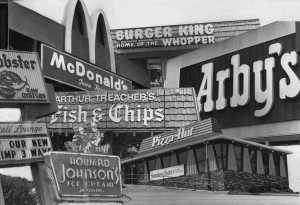 A photo collage for a book review. The Coalition of Franchisee Associations has drawn… (Pittsburgh Post-Gazette)

It also brought a lawsuit filed on behalf of nearly 80 percent of the company’s franchisees, who claimed the price cuts were more than they could afford based on what franchisees were paying for food.

Chris Schmitz, board member for theCoalition of Franchisee Associations and president of the Meineke Dealers Association, said franchisees were often contractually obligated to use specific vendors for food and supplies, even when it might be more cost-effective to shop around. When the time comes to sell beef and vegetables for less than a buck, individual franchises are the ones that eat the losses.

“Franchisors would love to sell a million 99-cent cheeseburgers, but franchisees would go out of business if they sold a million,” he said.

Pricing and vendor regulations are only a few of the issues that led the Coalition of Franchisee Associations to create the Universal Franchisee Bill of Rights, guidelines that its creators hope will eventually become an industry standard agreed on by franchisors and franchisees.

Drafted over the course of a year, the bill was ratified by the organization’s board and member associations in June.

The broadly written document tackles pricing and vendor regulations, but it also discusses franchisees’ rights to change ownership, renew franchise agreements without excessive cost, see full disclosure of fees collected by franchisors, and to freely associate with other franchisees.

There isn’t always a lot of public discussion of the conflicts within the industry.

Many franchisors require disputes to be settled during arbitrations and prohibit franchisees from discussing the cases. In addition, Schmitz said agreements often give franchisors the right to choose arbitrators and to keep hearings close to corporate home offices.

“Let’s say your franchise is located in Pittsburgh and the corporation’s home office is in Phoenix. . . . The franchisee would have to travel to Phoenix at their own expense,” he said.

“It’s set up so that only a few have an opportunity to have their dispute settled in a fair manner.”