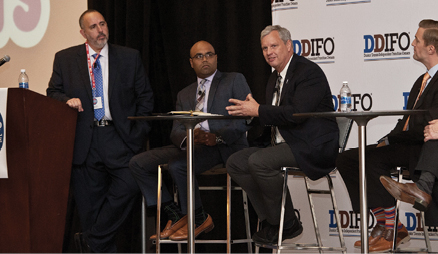 “As a class, franchisees invest more money but have less protection than the franchisor. They need these associations to fully represent their interests.”
— Keith Miller, a Subway franchisee and chairman of the Coalition of Franchisee Associations (CFA)

When Qdoba franchise owners learned that Jack in the Box, owner of their fast-casual restaurant chain for the past 14 years, was thinking of selling, they banded together.

“There’d been talk of forming an association for quite some time, and this was just the last motivator,” says Ron Stokes, chairman of the newly formed Qdoba Franchisee Association (QFA). Stokes is the largest Qdoba franchisee in the country, owning 55 locations.

Formally launched in June, the QFA’s primary concern is to protect their investment, collectively totaling $250 million. As franchising has grown, franchisees across the various systems have learned that working together in an entity independent of their brand’s franchisee council can pay big benefits.

“As a class, franchisees invest more money but have less protection than the franchisor,” says Keith Miller, a Subway franchisee and chairman of the Coalition of Franchisee Associations (CFA). “They need these associations to fully represent their interests.”

“If members act in concert, they have a more powerful voice,” says Stokes

Already, the QFA has an estimated 90% participation, and has been well received by the brand, Stokes says. The group is focusing on communications initially, to ensure that everyone in their franchisee community is aware of what’s going on.

The concept of franchising dates back as early as the mid-1800s, when Isaac Singer sold licenses for the right to sell the sewing machine he invented. Franchisee associations, in comparison, have a much shorter history, surfacing in the latter part of the 20th century.

Like others at the time, Dunkin’ Donuts franchise owners didn’t have an association to bring them togetheruntil 1988, when, a family dispute between Bill Rosenberg, Dunkin’s founder and president, and his eldest son, Bob, became the catalyst for change. In disagreement over the strategic direction of the brand, Bill left the company and began selling his stock, which was eagerly purchased by Canadian investor George Mann. Mann’s plan was to buy out the brand to sell it for its real estate assets.

With his 2,000 franchisees facing a vulnerable future, Bill Rosenberg encouraged owners to gain strength by banding together. In 1989, Dunkin’ Donuts Independent Franchise Owners, Inc., (DDIFO) was born, with the approval and recognition of the franchisor.

Franchisee associations have grown rapidly since the 1980s, attracting owners from all types of industries. In addition to Qdoba, another recent newcomer is coffee chain Tim Hortons. Earlier this year, Tim franchisees banded together in hopes of lobbying owner Restaurant Brands International for changes that would improve profitability. Almost half of Tim Hortons’ franchisees have joined that alliance.

“There are so many good things about [a franchisee association],” says Christy Williams, CEO of Elevanta, a professional services firm which helps to create and organize franchisee associations. “Collaboration, best practice sharing, member conventions, panel discussions, sharing pros and cons—there’s so much to learn from one another.”

Raising the collective concerns of its members is the paramount goal of a franchisee association. Connie Kirman, owner of Kumon Math and Reading Center in Howell, New Jersey, initially became involved in the International Association of Kumon’s Franchisees (IAKF) about nine years ago, out of concerns over possible expansion.

“About 8 months after I opened, there was threat of a predatory expansion – centers opening up too close to one another,” she says. IAKF quickly reacted, meeting with the president at the time to explain their concerns. “The association was at the front of the fight against the predatory expansion.”

While the threat of expansion hasn’t been completely eliminated, Kirman, now IAKF president, says the 20-year old group has remained a powerful voice for franchisees.

“We were very vocal and brought the concerns forward in one voice,” she says. “We are still trying to educate Kumon on the problems of predatory expansion.”

They’ve also been active in working toward improvements for both the franchisees and the brand.

“[One thing we’re currently doing is] working with a financial person who is looking at and analyzing our business model. There may be places that hurt the bottom line that Kumon doesn’t realize,” she says. “Our plan is to present these findings, and hope that the brand is open to it.”

A repository of knowledge

Working long hours and often covering multiple locations, it isn’t easy for a franchisee to keep up with relevant issues. From choosing the best appliances, to following evolving markets, to negotiating legal issues, a franchisee association serves as a source of knowledge.

“It’s better than each franchisee researching [a problem] or seeking legal advice completely independently, and with their own funds,” says Williams. “The association can do this work for them, and share the findings with other franchisees, who also find it valuable.”

Dawn Lafreeda, board member and treasurer of Denny’s Franchisee Association, sees this as a major benefit.

“Members of the DFA have more tools to run their business more efficiently, and to network. We have firsthand information that can save franchisee’s money,” she explains.

Lafreeda, who has been a franchise owner for 32 years and currently owns 81 Denny’s restaurants, cites remodels as an example of something which is required at all Denny’s locations, but can be time consuming and potentially overwhelming to a new franchisee.

“We’ve all done remodels, and we can share information about who to use, where to get better prices,” she says.

Franchisee groups embrace many forms of information exchange, from newsletters and magazines, to conferences and events. Today’s technology makes it even easier, providing instant access to archives or forums, and dispensing timely information to members from the comfort of their own homes.

“We put together two webinars per month, run by Kumon owners and occasionally outside professionals,” Kirman adds. “Our attorney also puts together an annual webinar, explaining changes to the contract and deciphering the legal language. All this information is archived, and members find it helpful.”

Because an independent franchisee association is designed to serve the interest of franchise owners, it can sometimes be at odds with the franchisor. In many cases, franchisee groups are well received and the two sides maintain an amicable working relationship; the franchisor recognizes that the group can shed a practical, real-world perspective on things—sometimes in the interest of both groups.

DDIFO is one of those exceptions. Despite the fact that it is one of the oldest independent franchisee associations, and was started at the recommendation of the brand’s founder, it is not officially – or publicly – recognized by Dunkin’ Brands.

“This made a huge difference, making franchisees more confident knowing they will have the protection of a franchisee association,” says Chally.

According to Lafreeda, the Denny’s franchisee association is very well received by current President and CEO John Miller.

“The DFA has an instrumental role in making decisions, and we look out for the interest of franchisees,” Lafreeda says, adding franchisee association board members take an active part in the development of issues, and are involved in councils making decisions on marketing, development and operations.

“We get a chance to examine and poke holes in things early, before decisions are finalized,” she says. “As a result, things run more smoothly. There are two perspectives behind everything: corporate and franchisee.”

Like any relationship, there are bound to be conflicts between franchisee association and franchisor. But that’s to be expected, adds Williams.

“You’re both on the same course, working to improve the brand and be aligned, so it shouldn’t be an adversarial relationship. But it’s natural that the two will disagree sometimes – that’s the point of advocacy,” says Williams. “The good thing is that with a franchisee group in place, there’s the ability to sit down and communicate.”

While brand-specific franchisee associations are invaluable to those within the industry, organizations that bring different specialties together give franchisees even more cohesion.

Founded in 2007, the Coalition of Franchisee Associations (CFA) seeks to benefit the entire franchisee population. In addition to those within the restaurant industry, members include the Meineke Dealer’s Association, Supercuts, Asian American Hotel Owner’s Association, and more.

“We represent millions of franchisees, regardless of what they sell, and cover issues of concern to franchisees in general – broader than brand-specific concerns,” says Chally.

The CFA provides member collaboration, education and advocacy through the conferences and educational opportunities it provides throughout the year. The Annual CFA Day Forum, held in Washington DC, provides a unique opportunity for attendees to bring their issues to the right ears.

“Any franchisee is welcome to come, and bring their issues forward before Members of Congress,” says Chally.

The CFA has supported and sponsored many changes at state and federal levels to protect franchisee interests. One of their biggest victories was the 2015 passage of California’s landmark franchise protection law AB 525, which gives California franchise owners much stronger protection in many situations, including termination and ownership of equipment.

“That was a big victory for California franchisees,” says Miller. “It helped to swing the pendulum back to the franchisee.”

As the recent developments demonstrate, a growing number of franchisees – across a multitude of industries – are joining independent associations. In addition to providing valuable assistance in times of conflict, groups offer members knowledge and networking, and an avenue through which franchisees can spark progress. Whether brand-specific or multi-industry, franchisee organizations are a vital tool for small business owners who have invested their time and money in franchised brands.