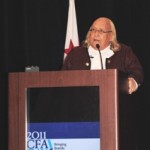 When franchisee association leaders gathered in Washington last month for the 2011 CFA Day Forum, they were witness to an important piece of franchising history. For months leading up to the June 22 meeting, members of the Fair Franchising subcommittee worked to draft a groundbreaking document, the Universal Franchisee Bill of Rights. Before a conference room of approximately 100 people, the document was read publicly for the first time—by none other than Benjamin Franklin.

The actor depicting the 18th century patriot read each of the Bill’s 12 sections covering such essential points as: Freedom of Association; Good Faith & Fair Dealing; and Fairness in Dispute Resolution.

The document’s preamble reads, “The Universal Franchisee Bill of Rights is a fairness doctrine. It has been developed by franchisees in multiple systems and industries to identify the basic terms of fairness that are missing in their franchise agreements and must be restored to ensure the success and growth of franchise systems.”

CK Patel, a member of the Asian American Hotel Owners Association (AAHOA) and co-Chairman of the CFA Fair Franchising subcommittee, says the Bill of Rights is an important step forward for franchisees to be able to receive an adequate return on the hard work and hard-earned capital they invest in their businesses.

“This Universal Franchisee Bill of Rights is all about fairness in franchising. It has been developed by franchisees in multiple systems and industries to identify the basic terms of fairness that are missing in their franchise agreements and must be restored to ensure the success and growth of the franchise systems,” said Patel.

DDIFO President and co-Chairman of the CFA Fair Franchising subcommittee Jim Coen says he and his colleagues wanted to be sure the Bill of Rights was written by franchisees to identify in plain terms the imbalance in franchise agreement. “These onerous franchise agreements must be rebalanced to ensure the future success of franchising,” he said.

Speakers at this year’s CFA Day Forum included Eric Karp, a Boston franchise attorney. His presentation on the role a franchisee association can play when there is a pending franchisor sale or change of ownership centered on taking the proper steps to position the franchisee association as a stakeholder before the sale occurs. Stakeholders, Karp said, are representative, cohesive, proactive, visible, assertive, resource and responsible.

Attorney Robert Zarco detailed examples of how franchise agreements fail to protect franchisees against such issues as encroachment. It’s “pervasive” in franchising because, “Expansion in a franchise system is how franchisors generate new revenue and that expansion often encroaches on existing franchisees.” Zarco said, “There is an internal conflict of interest and interdependency in the franchisor/franchisee relationship.”

Zarco joined franchisees for their visit to Capitol Hill on the second day of the forum, telling staff members for Massachusetts Senators John Kerry and Scott Brown that franchise agreements are inherently unfair and that franchisees are “seduced and induced” to sign agreements without fully understanding the gaping inequities in the contracts.

While not a legislative document, the Universal Franchisee Bill of Rights seeks to address those inequities. Franchisees shared the document with members of Congress they visited during the CFA Day Forum.

“It was a great leave-behind,” said Coen. “The issues highlighted in the bill of rights absolutely resonated with the staffers we met on Capitol Hill.”

The entire Universal Franchisee Bill of Rights is available to read and endorse at www.franchiseebillofrights.org. At the site franchisees, franchisors and others can click to endorse the document and make comments. Coen says the collaborative effort of the various independent franchisee associations that contributed to the creation of the document speaks to its inherent strength.

As Benjamin Franklin at the time of the signing of the Declaration of Independence in 1776, “Yes, we must, indeed, all hang together, or most assuredly we shall all hang separately.”