By Ed ShanahanPublished May 25, 2017Category From the Executive Director 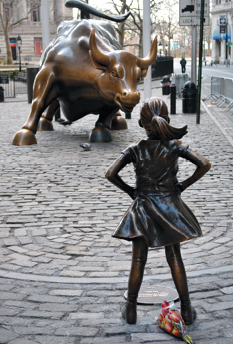 They say a picture is worth a thousand words, and that age-old adage has again been proven true by the “Fearless Girl” statue now perched in seeming defiance of Wall Street’s famous “Charging Bull” statue. For those of you who might not have seen the latest, allow us to catch you up.

On March 8, “International Women’s Day,” a statue of a young girl with closed fists defiantly perched on her hips was placed opposite the famous Charging Bull that has made its home on Wall Street for the past 28 years. According to State Street Global Advisors, which commissioned the statue known as the “Fearless Girl,” it was done as part of a campaign to promote gender equity in corporate leadership. It is unclear how a statue of a 7-year-old girl translates into more professional women on corporate boards, but since its placement, the visual has prompted charges that it has demeaned Wall Street, violated the Charging Bull copyright and transformed an iconic symbol of American economic power from a positive and encouraging statue to a negative and threatening diorama.

Metaphorically speaking, it makes quite the universal statement.

As we’ve noted in this space time and again, the power of the big national franchise brands is so often unchecked as to be analogous to that of a charging and muscular wild animal. Until the franchise owners within a franchised system join together and create an independent franchisee association to protect and defend their interests as an integral part of that brand, the bull is allowed to run free (pun intended!).

With the creation of the independent franchisee association however, that unbridled power is changed in some way – not necessarily by turning it into a negative (as the Fearless Girl is alleged to have done to the Charging Bull on Wall Street), but certainly giving the relationship more of a sense of balance. As a case in point, let’s consider the franchisee-driven changes in the Tim Horton’s franchise system.

When it was acquired by Burger King in 2014, Tim’s had in place a functioning brand advisory council (BAC) that ostensibly represented the interests of its franchisees. Not unlike the Dunkin’ Donuts BAC, Tim Horton’s members were freely elected from within the franchisee community to protect and defend the collective interests of those franchise owners. But, in Tim’s case (as in Dunkin’s), the franchise brand set the agenda for the franchisee representatives to discuss at advisory council meetings. Issues of concern to the franchise owners were not necessarily the priority of the brand’s executives and were pushed to the back burner, if not dropped off the stove completely. After all, he who pays the piper, calls the tune.

Tim’s elected franchisee representatives went in a different direction though. They abandoned the brand advisory council structure in favor of an independent franchisee association. They chose a structure where independence is sacrosanct; where the interests of the franchisees are primary; and where collectively, they can rise up as necessary. By creating an independent franchisee association, The Great White North Franchisee Association, they spoke truth to power; they told the corporate emperor that he had no clothes; and, they did it all on their own terms.

Tim Horton franchisees now join Dunkin’ franchise owners in more ways than just making and selling coffee. And, any of Tim’s franchisees could ask a member of the Dunkin’ franchise owner community about the benefits of the independent representation they’ve been receiving through DDIFO for the past 28 years and our friends north of the border would likely be told that while they may still have to face Charging Bull of corporate, with their own franchisee association, they can now do so with their fists clenched defiantly on their hips, for the ultimate mutual benefit of their business – and the Bull!