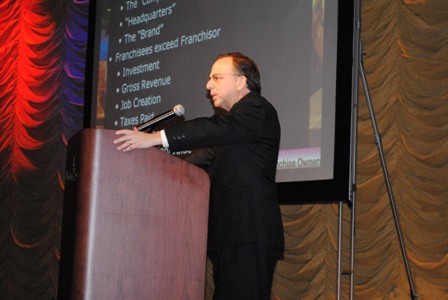 DDIFO’s first National Members Meeting on September 21 at the Mohegan Sun was chock-full of valuable information for franchise owners, but perhaps the most compelling presentation — The Franchisor In Play: Your Role as a Stakeholder, Not a Spectator — came from attorney Eric Karp. Karp’s message about the role franchise owners need to take in advance of and during a sale of the franchisor resonated strongly with the franchisees in attendance.

Karp is a partner in the Boston law firm of Witmer, Karp, Warner & Ryan LLP. In addition to serving as counsel to DDIFO, Karp works with several other franchisee associations in such systems as McDonald’s, Choice Hotels, Jackson Hewitt Tax Service and Popeye’s Chicken. He has also been attending DDIFO Board meetings for over a year as a franchise agreement specialist.

“Eric Karp really put things into perspective — the overall picture — and made it so understandable. He laid it out for you so that you understood what your position is as a franchisee and where the franchisor is coming from,” said one Massachusetts franchise owner.

“I thought he was very informative and had very interesting things to say. I was surprised that every other franchise system had something like this — a national franchisee association. That really surprised me,” said Dan Bodner, a New Jersey franchise owner. “And the positive thing was hearing that these other associations were able to make change or at least have input and an impact. It made me see how we really can become strong as one, we really can affect things.”

In his presentation, Karp emphasized the validity of DDIFO’s function as an independent franchisee association. He cited multiple court rulings and state laws, as well as a Federal Trade Commission mandate, that stand in support of such organizations. “You’re doing something that is quite legitimate and that needs to be continued and enhanced,” he said.

With regards to the looming change in Dunkin’ Brands ownership, the principal messages Karp delivered were:

This reality, however, doesn’t translate to equity in many instances, including the provisions of the current franchise agreement related to a Dunkin’ Brands ownership change. Karp pointed out just how unbalanced things are. Under the franchise agreement, Dunkin’ Brands doesn’t have to come to its franchisees for consent if it wants to sell the company, and there aren’t any conditions associated with the Brand’s decision to sell. But when franchisees want to harvest their equity, they have to jump through multiple hoops.

Karp spoke about the history and the current ownership of Dunkin’ Brands, which was acquired in 2006 by the private equity consortium of Bain Capital, the Carlyle Group and Thomas H. Lee Partners with $1.5 billion of debt. He described this debt as a “lit fuse” that will go off within the next one to three years with an ownership change. The Brand could be sold to another private investor or company, or it could go public, leading to a number of serious implications for franchisees. “When you graduate, if you will, to a public company, the game changes entirely because the horizon for a public company is the next quarterly earnings statement,” said Karp, “and there is a relentless imperative for growth.”

“It was really scary was when he (Karp) said basically if the Brand goes public it’s all about pushing quarterly profits. They won’t really care about how you run the business,” the Massachusetts franchisee said. “I hadn’t realized the ramifications. Going public is good for Wall Street but not for anyone else. Initially there will be excitement, the stock will go up, but if it falls off, who’s going to be in trouble? The franchisees.”

In light of the current circumstances, Karp encouraged DDIFO to keep doing what it’s doing — garnering franchisee input, raising the franchise community’s profile so outsiders understand who the real Dunkin’ investors are (i.e., the franchise owners), asserting unresolved issues, claiming stakeholder status and — in particular — growing and organizing franchisees nationwide. He stressed that, “Your credibility comes from your numbers. The higher the numbers you have, the more credibility you have not only with your franchisor but with other stakeholders in a potential transaction.”

Dennis Gramm, a two-store franchise owner in northwest suburban Chicago, commented, “I thought the messaging coming from Eric as it related to framing the direction of the association — providing some perspective of the role that we as an association need to play in casting that relationship with the franchisor — I thought that was a very, very meaningful message.”

“I thought Eric had a wealth of knowledge and I thoroughly enjoyed his talk,” Bodner said. “He reiterated that we need to not be afraid. We need to stand up and take leadership. I think that was good. The more people hear that, as well as seeing DDIFO grow and stay around for multiple years, I really think this could grow into something big.”