By Matt EllisPublished May 19, 2015Category Features 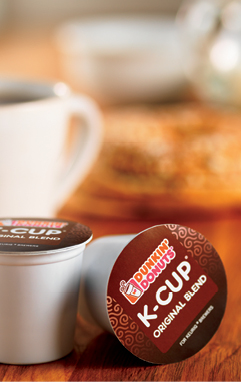 In the summer of 2007, news broke in the city of Cincinnati – the home of consumer brand giant Procter & Gamble – and in Boston – the home of Dunkin’ Donuts. P&G was to begin selling Dunkin’ coffee in supermarkets and other retail outlets. No longer did a customer have to go to a Dunkin’ shop to get Dunkin’ coffee.

“Through a licensing agreement with Dunkin’ Donuts, the largest coffee and baked goods chain in the world, P&G will provide Dunkin’ Donuts coffee to grocery stores, mass merchandisers, club stores, and drug stores throughout the U.S.,” P&G wrote in a press release.

At Dunkin’ Brands headquarters in Canton, discussions had centered on how to get Dunkin’ coffee into more American kitchens and consumers’ coffee pots. In a press release, former Dunkin’ Donuts President Robert Rodriguez said, “We are thrilled to be working with Procter & Gamble to introduce new consumers across the country to our great-tasting coffee and we are pleased with the initial response from retailers.”

The news was heralded by the business press and was most assuredly well received at the headquarters of Bain Capital, the Carlyle Group and Thomas H. Lee Partners, the private equity trio that owned Dunkin’ Brands at the time. But, within the community of Dunkin’ Donuts franchisees, who own over 99 percent of the Dunkin’ Donuts shops, it felt like a knife in the back for their prime product to be sold in the consumer packaged goods (CPG) business right outside their shops.

Fast forward nearly eight years and sales of K-Cups at Dunkin’ Donuts shops are falling. What’s more, while the single-serve K-Cup market is exploding, Dunkin’ is facing a dwindling share of the market. In the face of these circumstances, Dunkin’ inks a deal with the J.M. Smucker Company and Keurig Green Mountain to start selling K-Cups in supermarkets. But, this time the reaction by franchisees couldn’t be more different.

Having remained true to his 2011 promise not to sell the brand’s K-Cups outside its restaurants, Dunkin’ Brands CEO Nigel Travis and his team now worked collaboratively with franchisees, through the Brand Advisory Council (BAC), to forge an unprecedented deal, calling for a 20-year profit sharing agreement under which Dunkin’ Brands and its franchisees will share equally in the net profits from these retail sales.

“This was a better outcome than all of us would have hoped for because there is a win on the franchisor side and the franchisee side,” says John A. Gordon, principal of Pacific Management Consulting Group and DDIFO’s restaurant analyst. “I give the brand and Nigel Travis credit for waiting for a period of time and staying true to his word of concern about franchisee profitability.”

“It’s a truly collaborative relationship. They technically could have done this without us but Nigel made a promise and he has definitely kept his word and has treated us as partners in this process,” according to a franchisee and BAC member who requested anonymity.“ It wasn’t easy, and both sides walked away from the table at times, but we worked together to achieve an unprecedented accomplishment. We believe that no other franchise system in history has a partnership in CPG like Dunkin’s does.”

The K-Cup deal, which was finalized in April 2015, is a partnership between Dunkin’ Brands, Smucker and Keurig. It’s estimated the deal could yield between $2,500 and $3,000 a year for franchised locations. According to Finance.com, “For once we find the franchisees on the royalty-collecting end of the arrangement.”

“We have industry-leading partners in Smucker’s and Keurig Green Mountain,” the franchisee says. “They have their own pretty substantial advertising and marketing budgets so we hope to be able to leverage them with our own efforts,”

In addition, he says, the Dunkin’ strategy specifically calls for marketing initiatives meant to drive grocery consumers back to Dunkin’ Donuts shops for coffee, baked goods and sandwiches.”We call it boomerang marketing.”

“At this point in time, I can’t think of any better way to demonstrate the strength of Dunkin’s coffee than having it actually present in the grocery channel,” says Gordon.

According to the magazine The Atlantic, nearly one in three American homes now has a pod-based coffee machine. Keurig has virtually cornered the market providing convenience, quickness and choice to the task of making coffee. Nine billion K-Cups were sold in 2014 accounting for much of Keurig Green Mountain’s $4.7 billion in revenue, which was more than five times what the company earned five years earlier. While drip coffee-maker sales are stagnant, pod-machine sales have increased six-fold since 2008.

That’s an important consideration for Dunkin’ Donuts franchisees who’ve been devoting valuable shelf space and marketing money towards the sale of coffee-by-the-pound and K-Cups. Even as the demand for single-serve coffee has recently exploded, Dunkin’ has had trouble seizing a significant share of the market since it first introduced K-Cups sold only in its shops.

Franchisees say K-Cup sales in Dunkin’ shops were initially very good when the single serve market was in its infancy, but the market changed with the explosion of single-serve options in grocery aisles. Experts say 80 percent of all K-Cup packs are purchased where consumers buy their groceries and since Dunkin’ K-Cups were not on grocery shelves, customers chose other brands. The new deal, however, gives Dunkin’ – and its franchisees – a chance to tap into a category which is predicted to grow an additional 90 percent over the next several years. Already, sales of K-Cups are exceeding coffee-by-the-pound as the largest share of packaged coffee sold in supermarkets.

“Consumers are now buying their K-Cups in groceries anyway, and it’s a market that Dunkin’ would have had zero part of had we not done this. Even if there was cannibalization of in store K-Cups, it is cannibalization of a shrinking business. And if the brand had done it without us, we would have had zero share of it,” one franchisee told Independent Joe. “Now we are in the game and getting half of the profits.”

“We believe this profit-sharing agreement is unprecedented in our industry and underscores the collaborative franchisor/franchisee relationship we have at Dunkin’ Brands and our focus on building store-level profitability,” Dunkin’ Brands chief communications officer Karen Raskopf told Independent Joe.

The K-Cup announcement was positively received on Wall
Street, boosting the stock price. But, beyond that short-term gain, the impact of this deal should provide long-term benefits to both Dunkin’ Brands and the franchisee community. Aside from the revenue split for sales of K-Cups, Dunkin’s new CPG agreement also calls for splitting the profits derived from creamer and bagged coffee sales. And it leaves the door open to funneling other Dunkin’ Donuts branded products into the consumer channel and providing franchisees with additional revenue.

As the old saying goes, “Half of something is better than 100 percent of nothing.”