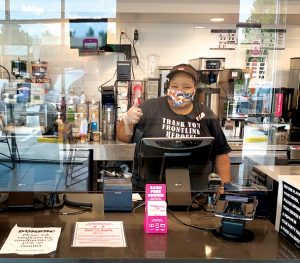 Every franchisee can remember the day they closed their lobbies because of the coronavirus pandemic. For Charles Cutler, who operates 12 stores in Georgia and South Carolina, the date was March 15.

“It was and wasn’t a hard decision. Our employees were alarmed as was the rest of the country, including customers, about how you catch COVID-19. I wanted them to feel safe coming to work,” says Cutler.

Decisions like those were made before mandates for Plexiglas shields at the front counter and personal protective equipment for employees.

“If the customer would have walked in [at that time], employees would have been one or two feet from them. It would have been nice to say ‘lobbies are staying open,’ but I wasn’t going into the stores, so I couldn’t ask my employees to do something I wasn’t doing,” Cutler says, noting that closing the lobbies helped simplify operations.

“If you didn’t have to have your lobby open and donut case full, and you could just focus on one area–the drive thru–and not have to overbake and overstaff. You could control the situation a lot easier,” he says.

With fear and uncertainty in the air, Cutler trimmed working hours by 20 to 25 percent. He spread the available hours evenly among those who wanted to work, and he tried his best to accommodate those who wanted to work more. All that while complying with rules limiting the number of people that could work together at the same time. 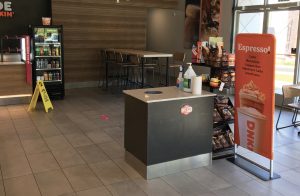 The first three weeks after lobbies closed, Cutler’s business dropped 30 percent, but sales began trending upward soon after. In May, he recorded sales slightly above the prior year. That was with drive-thru only service.

“At first, I think people weren’t going to leave the house under any circumstance. But after a few weeks, when things weren’t open at all and customers had nowhere to go, they were more forgiving and happy our drive-thrus were open,” he says.

At the end of April, Georgia became the first state to reopen its economy, allowing fitness facilities, hair and nail salons and restaurants to welcome back customers, with restrictions. Dining rooms in the Peach State had to accommodate six feet of separation between customers. But many fast-food chains, Dunkin’ included, chose to wait. Tracy Johnstone, who owns seven McDonald’s restaurants in Florida, told Bloomberg News, “We are not running a hard timeline.” Instead of throwing the doors open and allocating staff to continuously sanitizing lobbies and dining areas, she wanted to hear from her employees and managers to determine “when they are ready and when we feel good about it.”

Shams Charania, who owns 26 Dunkin’ shops throughout Georgia, says he waited until the first week in June before opening the lobbies at nine of his restaurants. He was able to go slow, he says, because drive-thru business had been brisk and because Dunkin’ Brands “gave us a lot of flexibility and support.” He viewed reopening as “a test, so we can learn and get feedback from customers and employees, take in the information carefully and adapt based on safety and concerns.” 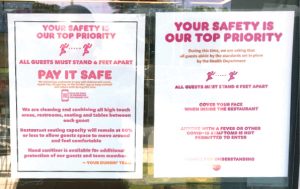 Cutler says he took the same approach, relying on customer counts and other data to dictate his reopening plans. In late May, he opened lobbies for takeout service at two of his locations, a low-volume store near Hilton Head Island (on the same weekend beaches were reopening) and a location in suburban Georgia.

“We tried to pick two opposite stores to see what happens and how the cards play out,” says Cutler.

Sales at the Hilton Head shop jumped 15 percent, leading Cutler to assume “the increase was from people heading to Hilton Head who needed to use the bathroom and stopped to get a donut.” Because 85 percent of business in both stores were still coming from the drive thru, Cutler didn’t think he was missing out by not opening his other lobbies. He says the No. 1 priority remains keeping customers and staff safe.

Because the regulations Georgia and South Carolina imposed for reopening restaurants were all contained in the enhanced safety standards and measures imposed by Dunkin’ Brands, franchisees were confident they could comply with state and local rules by following the Dunkin’ playbook. But, as Charania notes, if there was any confusion about which standards to follow, “[Dunkin’] made clear that state and local regulations came first and brand regulations second.”

Face coverings were one example. While Dunkin’ provided masks for employees, Cutler allowed employees to get their own masks. “It was hard to acquire the brand masks, and I wanted to let the employees decide the kind of mask they wanted for their safety and comfort,” he says. “As long as there isn’t anything offensive on them, and the mask covers their mouth and nose, they can wear what they choose,” says Cutler.

He also wanted to ensure his employees could step outside when they needed to remove their mask and breathe fresh air. If possible, he is encouraging his employees to take a 10-minute outdoor break every 45 minutes.

“I visited a store the other day for 20 minutes with a mask on, and I was anxious to take it off. It is important employees get frequent breaks of fresh air without a mask on. Five months ago, if I saw an employee walking around outside that often, I would have thought, ‘What are they doing?’ But these are unusual circumstances,” Cutler says.

Those circumstances also require he abides by all other safety requirements, such as having employees wear gloves, placing markers on the floor to keep customers six feet apart, and ensuring he doesn’t have too many employees behind the counter at the same time. Cutler says most of his employees are eager to work and are appreciative of the hours, but there are those who need to turn down work, and he understands why.

“Many employees are afraid for themselves or to be exposed and put others who they live with at risk [like the elderly or those with pre-existing conditions]. I respect that 100 percent,” he says.

Charania has instituted stringent cleaning practices to keep his shops safe. An employee is now assigned to disinfect the common areas every 15 minutes, with specific attention paid to wiping door handles and counters after customers leave. Bathrooms are also being cleaned more frequently. An additional employee is in charge of monitoring the lobby at the front door, in case lines build up, and all condiments are now kept behind the counter for employees to hand out as requested.

“The overall goal is to make our stores as safe as possible for both employees and customers and we are willing to adjust based on their feedback and what we observe competitors doing, too,” says Cutler.

“One of the reasons I joined [Dunkin’] 13 years ago is I wanted their brain in this too. I respect their guidance. But at this time, we are not anxious to allow customers to stay in the stores,” Charania says.

He and Cutler agree their customers will help dictate when they open more lobbies. “Our overall goal is to make our stores as safe as possible for both employees and customers, and we are willing to adjust based on what will make them most comfortable with our business,” Charania says.

“If sales doubled at these stores, and lobbies were getting full, or we heard a lot of drive thru customers saying they wanted to come in, I’d say we need to get more stores open” says Cutler, emphasizing his goal to best serve his customers.

“If we always keep our customer in mind, we’ll be more profitable, have better sales and happy employees,” Cutler says.