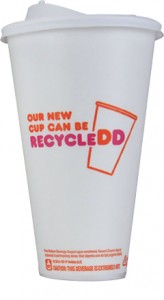 Ask most any Dunkin’ Donuts customer and they will tell you they love the brand’s iconic foam coffee cup and spill-saver lid. But time is running out on the foam cup. As more and more cities and states implement bans on Styrofoam, Dunkin’ Brands is pushing hard for a replacement that will keep coffee hot and keep franchisees in compliance with new environmental regulations.

Bans have been rolling in slowly. Washington, DC, Minneapolis, San Francisco, and Albany, NY are among the largest cities to force restaurants to replace Styrofoam cups and other foodservice containers with suitable, recyclable alternatives.

“Overall, Dunkin’ Donuts is actually late in terms of switching from Styrofoam,” says John A. Gordon, principal of Pacific Management Consulting Group and DDIFO’s restaurant analyst. “McDonald’s had switched all of its cups from polystyrene to paper in 2012 and changed all of the sandwich clam shells in 1990.”

Time is no longer on Dunkin’s side. The tipping point came when Mayor Bill de Blasio announced that as of July 1, 2015, food service establishments, stores and manufacturers in New York City may not possess, sell, or offer for use single service Expanded Polystyrene (EPS) foam articles.

“By removing nearly 30,000 tons of expanded polystyrene waste from our landfills, streets and waterways, it is a major step towards our goal of a greener, greater New York City,” de Blasio said in a press release.

Styrofoam is the brand name for polystyrene, a petroleum-based plastic that’s lightweight and insulates well—two key ingredients for a perfect hot coffee-to-go cup. But, it has several downsides. First, according to the Environmental Protection Agency, Styrofoam is a carcinogen that can also cause skin irritation, as well as problems with the gastrointestinal and nervous systems. Second, it is manufactured by using hydrofluorocarbons, which can affect the environment’s ozone layer, and petroleum, which is a non-sustainable resource or a resource that can run out. Third, Styrofoam cups do not break down in landfills. According to the EPA, Americans throw away 25 billion Styrofoam cups every year and these will still be around 500 years from now. 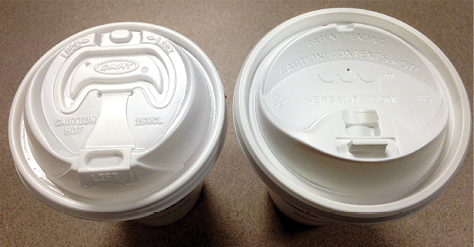 So, with the nation’s largest city forced to find a foam alternative, Dunkin’ has stepped up its R&D efforts. The problem is, it’s hard to replicate the functions of the iconic Styrofoam cup. In Brookline, Massachusetts, for example, Dunkin’ adopted a paper lined paper cup alternative and a recyclable lid. When filled with hot coffee, the cup is warmer to the touch than a foam cup. The lid looks similar but is not as tall and doesn’t have the removable tab. It is working in Brookline but isn’t the alternative Dunkin’ is using in Brooklyn, one of New York City’s five boroughs.

Ann Nasary, who owns a Dunkin’ Donuts shop in Brooklyn, has already made the switch to recyclable coffee cups made of polypropylene (PP). “The cups can be thrown away with the recyclables,” says Nasary. “It’s a double-layered paper cup that holds the same amount of liquid, but will have a slimmer shape. The new lids are also better because they have a wider sipper.”

The good news, according to Nasary, is that customers are responding favorably overall. “The customers love the new look even though most are clueless about the new July foamless environmental law.”

The bad news is that the cups are more expensive, by a wide margin.

“We are committed to finding the most cost-effective, sustainable solution for Dunkin’ Donuts franchisees,” says Roland Ornelas, Chief Procurement Officer at the National DCP (NDCP). “The weighted average cost of the new Versalite cups will be 65 percent more expensive across all cups and lids and the medium cup has the highest increase at around 180 percent more on a per-unit basis. We may be able to shrink the gap on the costs given the alternatives being evaluated, but the foam cup was a very low-cost solution.”

“The problem with having to change the cup and having it cost more is the reality of higher wages,” says Gordon, referring to the national push to raise the minimum wage. Already, in New York State, the minimum wage for fast food workers is slated to increase to $15 per hour by 2018.

For franchisees like Ann Nasary, the double whammy of higher labor costs and higher cup costs may be enough to raise prices for certain menu items.

So far, Nasary says she hasn’t felt that pressure.

“We did not need to change our menu prices due to any increase in new cups or lids, but when milk prices, the cost of paper and the cost of minimum wage all go up we may finally need to increase menu prices, but thank goodness these new lids and cups did not affect our bottom line.”

The PP cup has performed well in initial tests. Franchisees in selected locations in Massachusetts, Vermont and California are currently testing the PP cup as well as a double-walled paper cup.

“This is a matter of providing assured supply for our members,” says Ornelas. “We need over a billion coffee cups and there aren’t a lot of suppliers with a billion cup capacity, but the New York City ban is moving the timeline forward. This is a large step toward making the country Styrofoam-free, an important move in terms of corporate social responsibility and responding to the needs of customers. New York was substantial enough from a regulatory standpoint that we had to have serious discussions about this. As more of the country is facing Styrofoam ban regulations, we are working very closely to find the ultimate solution.”

And, Ornelas points out, testing will be underway for different lids. The “ultimate solution” will have to accommodate a number of items on the NDCP and Dunkin’ Brands checklist, chief among them, that the cup is durable and able to withstand the heat of a steaming hot Dunkin’ coffee.

“Is it too hot to touch? How heavy is the cardboard or paper? These things need to be thought about and tested,” says Gordon.

And, that’s not all. The right cup needs to be paired with a lid that can do its job without leaking or spilling.

“It’s also really important that any alternative lid is embraced by the Dunkin’ consumer considering their passion for what we have today. We are working hard to source a value-driven solution that feels familiar while being fully compliant.”