Alex Rowzani loved the Dunkin’ model so much, he bought four shops 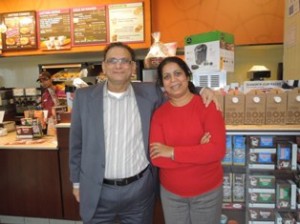 Rowzani has now set his sights on expansion­–and his employees, family members, and business associates are all for it.

To recognize the hard work and contributions of their employees, Rowzani and his wife, Sue–who is his business partner and runs the stores’ day-to-day operations–hosted two separate parties for employees during the holidays. They selected two different dates because they knew work schedules would not allow all employees to attend a single event. In total, they awarded about $20,000 in employee bonuses throughout the year.

After the party, employees sent the couple thank you notes; these are just two of the comments they received:

Alex & Sue have given me a new life, a new challenge, earned me name and fame. And now, when I look back, I feel the difference – where I was and where I am now.”—Kabirul Alam—Store Manager # 1 Award Winner

I am pleased to work for Alex & Sue because they believe in and reward employees (like, this New Year’s bonus)… It has been an exceptional year under Alex’s direction and I look forward to a successful future. I will try … to fulfill the dreams expressed in your eyes, to make the company larger and more successful. Dalia Chowdhury, Crew Member

Alex Rowzani came to this country in 1983 from the high tech city of Hyderabad, the capital of the state of Andhra Pradesh on the southeastern coast of India. The eldest of nine siblings, Rowzani recalled that when he was young, he “used to hang around with the business owners, accountants, and lawyers,” learning how they did business. His father died when he was 15.

When he was old enough, decided he would travel the world. He knew that the U.S. was the land of opportunity and chose New York as the right place to settle. Rowzani became a sales agent with New York Life Insurance Company. Within one year he was promoted to sales manager and rose to become the top sales manager in the country; then he was promoted again to the job of associate general manager.

As a result of his hard, work he earned enough money to bring all his siblings to New York and to help establish them. In 1987 he returned to India and married Asraf “Sue” Farishta, from Raipur, Chattisgarh, in the central part of the country. Her background is in developmental psychology and she worked as a secondary school teacher.

Alex and Sue have a son, 23 year-old Yaseen, and a daughter Sana, who is 21. Yaseen assists his father in his brokerage business and works at Chase Bank. Sana is in school studying to be a speech pathologist. Both the children are well versed in the family businesses of brokerage and Dunkin’ Donuts, even as they pursue their own career interests.

Rowzani started learning the brokerage business in 2002 and later founded Quick Business Network, Inc. in New Hyde Park, NY. The brokerage assists in the buying and selling of small- and medium-size QSR businesses such as Dunkin’ Donuts, Popeye’s, Subway, IHOP, KFC, and many other franchises in the New York metropolitan area.

He says he was always impressed the most with Dunkin’ Donuts and when four stores in Jamaica, NY came up for sale he decided he would make the investment—going from “deal maker to coffee maker.”

At the Dunkin’ Donuts training centers in Orlando, Boston, and Long Island, the days were long: 6am to 5pm. But Rowzani routinely stayed an additional half hour at the facility, gaining mastery over the content covered that day. During the training he was required to all the chores from sweeping and mopping to cashier and management. He watched the online training videos and took the tests. He learned all the calibrations and to dump any product that hadn’t sold within the requisite time. His wife, Sue, completed the same training.

Now, Rowzani is heavily involved in the training of his employees and firmly believes in the benefits Dunkin’ Donuts provides through its Online University training program. Watching training videos and learning how to make products from start to finish–before ever touching the live product–is a cost-efficient and effective way of maintaining quality control for the Dunkin’ brand, he says.

“There are no short cuts to quality,” Rowzani said. This philosophy is what has made and kept the Dunkin’ Donuts and Baskin-Robbins brands successful on an international level. Every new employee should be given online training, Rowzani said, as “this is an investment and helps to keep the customers and growth of the sales.”

It was precisely the consistent look and quality you see in all Dunkin’ franchises that attracted Rowzani’s attention in the first place. “After 18 minutes, if a pot of coffee hasn’t sold, you dump it out,” Rowzani said. To outsiders, it may seem like money down the drain. But those on the inside know that this basic policy provides customers the confidence that no matter where in the world they get their Dunkin’ Donuts coffee, it will be hot and fresh.

His commitment to quality is one of the reasons he and his team have been able to transform underperforming locations into highly profitable ones. “Customers know how they want it to taste,” he emphasized.

So if a customer ever complains about a product in any one of his four locations, that customer gets a free replacement, “no questions asked.” Rowzani says he and his employees know some customers may take advantage of this policy, in fact Rowzani estimates, that across his four locations, they give away between $5,000 and $10,000 worth of free products a year. But, he balances that cost with the 100 percent satisfaction goal he has for all his franchises.

“That will keep them coming back,” Rowzani said. And he­–and the entire team at Jamaica DD Networks–have the awards to prove it.

Jamaica DD Network prides itself in always staying ahead of the curve with product and service offerings that are specifically tailored to the needs of each customer. –Alex Rowzani