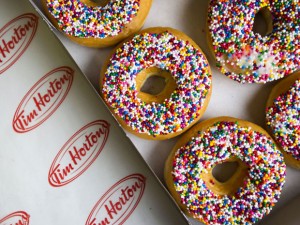 Christine Dobby of the Financial Post reports that Doughnuts are an emotional food for Canadians. When Tim Hortons Inc. made a franchise-wide decision to ditch fresh-baked methods in favour of microwaving pre-cooked baked goods in-store, many people took it hard.

Even company co-founder Ron Joyce, who sold the majority of his stake in the company in 1995 and retired as a director in October 2001, was dismayed when word of the baking switch got out in 2003 and expressed his disappointment.

Time marches on though, and loyal customers adjusted to the change, but some franchise owners are still having trouble swallowing it.

Their concern has more to do with their contention that an unfinished doughnut now costs them 17.9 cents, almost triple the former 6 cent price  when they baked it themselves from scratch, an increase that takes a serious bite out of their profit margins.

That’s one of the allegations made in a $1.95-billion class action lawsuit launched by two Burlington, Ont., Tim Hortons franchise owners in June 2008. After a series of delays, a two-week certification hearing is finally set to proceed on Aug. 19.

Judge George Strathy of the Superior Court of Justice in Toronto will hear it at the same time as Tim Hortons’ own motion to dismiss the claims.

Neither side will comment on the specifics of the case as it heads to this pivotal stage of the litigation. But David Morelli, a spokesman for Tim Hortons, said in an email, “We believe the lawsuit has no merit and that we will ultimately be successful,” recapping the position the company has taken from the start.

The company plans to fight the allegations by arguing the plaintiff franchisees in question were inefficient and that the new system is profitable, according to a judge writing in an earlier motion in the case.

The Tim Hortons chain of quick-serve restaurants, founded by the legendary Maple Leafs defenceman in Hamilton, Ont., in 1964, merged with Wendy’s International Inc. in 1995 as it pursued expansion into the United States. After an initial public offering, it was spun off as a separate company in September 2006 and now has more than 3,000 stores in Canada.