The Illinois Dunkin’ Donuts event raised $243,000 to support the annual games. Glenview Dunkin’ Donuts customers who joined Madigan received thanks in the form of free donuts and other Dunkin’ favorites. 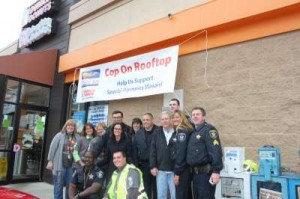 Glenview, Ill., Dunkin Donuts customers on June 1st who were simply expecting their regular morning cup of coffee and donut were no doubt a bit surprised to look up and see Illinois Attorney General Lisa Madigan sitting  up on the roof of the building, waving and smiling. But it was just the Illinois Dunkin’ Donuts franchisees’ way of helping state police officers “shout from the rooftops” to raise money and increase public knowledge about a very important cause: the Illinois Special Olympics.

For the 10th year in a row, Illinois police officers staked out rooftops at 130 Dunkin Donuts in Illinois starting at 5 a.m. Each year, 3,000 cops take part in the “Law Enforcement Torch Run,” marching the Flame of Hope through their hometowns for 1,500 miles until they reach the games in Normal.

According to an article in the Chicago Sun-Times, Attorney General Madigan really enjoyed the fundraising effort, quoted as saying that she loves supporting the Special Olympics: “It’s one of the most meaningful things I do. We can help these kids have terrific opportunities, [and] it’s better than sitting in the office.”