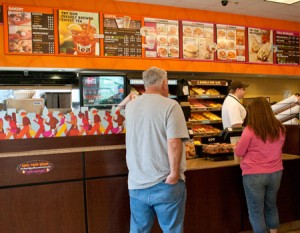 US Dunkin’ Donuts’ survey scores in the third quarter Goldman Sachs Consumer survey were unchanged from the prior quarter survey.  Dunkin’ ranked roughly in the middle of the pack, just below McDonalds and slightly above Tim Horton’s in overall brand attributes.  Subway and Chick-fil-A were the top two brands while Domino’s and Jack In The Box were the two lowest.  Dunkin’s highest attribute was “modern look and feel”, while its lowest was “would recommend”, it still had a good number in the “would recommend” category.  On a very positive note, Dunkin’ was the 3rd highest in the group in terms of “gaining a new group of customers”.