Your Coffee May Have Some Health Perks, but Can Brew Trouble in People With Certain Conditions 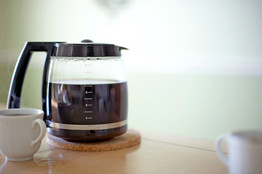 Melinda Beck writes in the Wall Street Journal that judging by recent headlines, coffee could be the latest health-food craze, right up there with broccoli and whole-wheat bread.

But don’t think you’ll be healthier graduating from a tall to a venti just yet. While there has been a splash of positive news about coffee lately, there may still be grounds for concern.

This month alone, an analysis in the Archives of Internal Medicine found that people who drink three to four cups of java a day are 25% less likely to develop Type 2 diabetes than those who drink fewer than two cups. And a study presented at an American Association for Cancer Research meeting found that men who drink at least six cups a day have a 60% lower risk of developing advanced prostate cancer than those who didn’t drink any.

Earlier studies also linked coffee consumption with a lower risk of getting colon, mouth, throat, esophageal and endometrial cancers. People who drink coffee are also less likely to have cavities, gallstones, cirrhosis of the liver, Parkinson’s disease and Alzheimer’s disease, or to commit suicide, studies have found. Last year, researchers at Harvard University and the University of Madrid assessed data on more than 100,000 people over 20 years and concluded that the more coffee they drank, the less likely they were to die during that period from any cause.

But those studies come on the heels of older ones showing that coffee—particularly the caffeine it contains—raises blood pressure, heart rate and levels of homocysteine, an amino acid in blood that is associated with stroke and heart disease. Pregnant women who drink two or more cups of coffee a day have a higher rate of miscarriages and lower birth-weight babies; caffeine has also been linked to benign breast lumps and bone loss in elderly women. And, as many people can attest, coffee can also aggravate anxiety, irritability, heartburn and sleeplessness, which brings its own set of problems, including a higher risk of obesity. Yet it’s just that invigorating buzz that other people love and think they can’t get through the day without.

Why is there so much confusion about something that’s so ubiquitous? After all, some 54% of American adults drink coffee regularly—an estimated 400 million cups per day—and coffee is the second most widely traded commodity in the world, after oil.