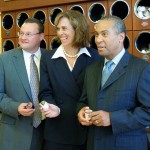 Patch.com reports that  Governor Deval Patrick, along with State Rep. Brad Jones and State Sen. Katherine Clark visited Keurig on Walkers Brook Drive, Tuesday, to hear about the company’s history and how it continues to grow.

A large contingent of the fast-growing company’s staff greeted the governor before company leaders took him for a tour of the office—including a look at many of the machines that the company has developed over its 18-year history.

The governor said that the company was helping the state’s economy and adding jobs through technological as well as consumer innovation.

“We are here as much as anything to call attention to that,” Patrick said.

While there, Patrick, Jones and Clark sampled some of the company’s products. The governor joked that Keurig probably has a well-caffeinated office.