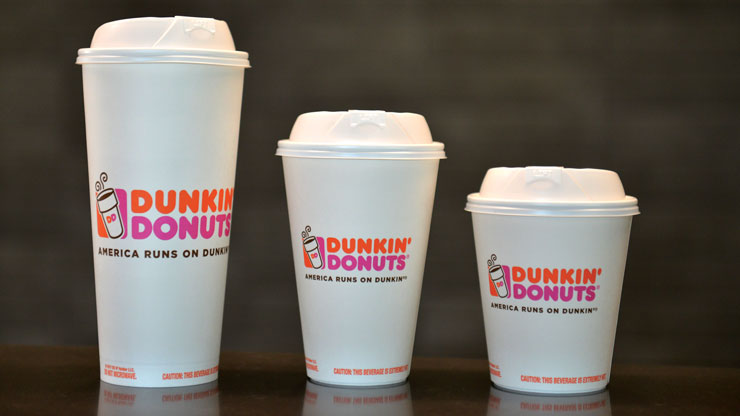 The staple Styrofoam cup will soon be a thing of the past in the Dunkin’ world. As of last May, Dunkin’ Brands removed foam cups from all New York City and California locations. Stores in Hawaii are in the midst of replacing foam cups too, with the brand planning for all of its 12,500 stores around the world to do the same by 2020.

What cup will fill the shoes of its predecessor? The replacement is a double-walled paper cup made of paperboard certified to the Sustainable Forestry Initiative (SFI) Standard, which promotes sustainable forest management in North America and the responsible procurement of forest products around the world. No sleeve is needed with the paper cup since it is designed to keep beverages warm without the cup being too hot to hold. The new cup made its debut early this year at the Dunkin’ Next Generation concept store in Quincy, Mass.

“I know change is scary, especially since the foam cup has been such an iconic part of the brand. But as scary as change is, change is also necessary,” said Misha Goli, who owns eight Dunkin’ Donuts shops in Oklahoma. “If you don’t change, others change and you get left behind.”

This step is the latest in Dunkin’s 13-year effort to become more socially and environmentally responsible. Taking a look back: In 2005, the brand turned to a four-cup carrier made of recycled newsprint. In 2009, it began using napkins made of 100 percent recycled paper with bagel bags following suit in 2014. In 2015, Dunkin’ started using lids for cold beverage cups made from recyclable No. 5 polypropylene, an effort that was completed this summer, and which will remove an estimated 500,000 pounds of material from the waste stream each year. In 2016, Dunkin’ issued a Sustainable Pulp and Paper Sourcing Policy that aimed to source paperboard certified to the SFI Standard for 80 percent of its consumer-facing-based packing by the end of this year.

“There are a number of reasons why companies make these moves. Some are in the area of social responsibility and some are just straight business strategy,” according to Andrew J. Hoffman, PhD, professor of sustainable enterprise at the University of Michigan’s Ross School of Business.

An act of social responsibility

When Dunkin’ announced its move to paper cups last February, Karen Raskopf, the brand’s chief communications and sustainability officer, stated in a press release that the decision to eliminate foam cups is significant for the brand and the industry.

“We have a responsibility to improve our packaging, making it better for the planet while still meeting the needs of our guests. Transitioning away from foam has been a critical goal for Dunkin’ Donuts U.S., and with the double-walled cup, we will be able to offer a replacement that meets the needs and expectations of both our customers and the communities we serve,” said Raskopf.

The move makes sense as it is well-known that foam has a negative impact on the environment–decomposing slowly and damaging marine life and animals when it ends up in the ocean.

“[Dunkin’] could be looking at ocean plastics which is a major issue getting lots of attention these days. Styrofoam has always been a problem with the durability of them once they enter the landfill,” Hoffman says. “But I hate to be one of those people who says ‘what more can you do for me?’ A lot of people are really attentive to what they perceive as hypocrisy, so if Dunkin’ does it on one thing and not another, people may say ‘You don’t really mean it.’ This is a great start, but getting rid of all material and moving to people reusing their own cup is even better.”

In addition to these efforts, Dunkin’ Brands is also taking steps to remove artificial dyes from its products, build more energy-efficient restaurants, and partner with the Rainforest Alliance to source certified coffee.

A move based on business sense

While Goli believes that disposable cups and all plastics certainly have a negative effect on the environment, he says customers are aware of this too.

“To stay competitive, you have to make the moves that the consumer wants. You have to be observant of what your competitors are doing and react accordingly, but understand what your guests want,” says Goli. “Starbucks has always had a paper cup. They don’t have a double-walled one, so ours might be better at retaining heat and that puts us at a competitive advantage.”

Hoffman, the University of Michigan expert, agrees, stating that if Dunkin’s competitors are being environmentally conscious, it is in the brand’s best interested to do the same.

“Maybe [Dunkin’] customers care about the environment, in which case the brand wants to satisfy customers. If customers notice that competitors are doing it, but Dunkin’ isn’t, that can be embarrassing. They want to be seen as forward thinking and progressive,” Hoffman says, noting that Dunkin’ may also be positioning the company to be ahead of new regulations it is anticipating, or that its suppliers may be planning to move toward more environmentally safe products.

What it means for franchisees

How will moving to the new cups affect franchisees’ day-to-day business?

“I think a lot of work has been done in finding the right cup solution, and the fact that we’re rolling it out in phases will hopefully give us enough warning so that the impact is minimal and if anything, the impact is positive for the brand,” says Goli, who is expecting to open his 9th store – a Next Gen concept store – in Oklahoma City this month. The store will use the double walled paper cups, as well as follow the system-wide initiative to remove artificial food coloring.

As a second-generation operator, Goli says there are good and unknown aspects of the changes when it comes to day-to-day operations. His dad started as a baker in the 1970s and bought his first shop in 1981. Goli grew up in Dunkin’ Donuts and 10 years ago took over operations of four stores in his father’s network. Since then, he’s built out.

“I’ve been around the system my whole life, and grew up with foam cups. I understand why people have so much love for them. They hold the coffee hot for a long time, are easy to use, and are lightweight, but I also understand the need to switch,” he says. “The reality is a lot of consumers are shifting towards wanting the paper cup rather than the foam cup.”

As an operator, he says a big plus of the double-walled paper cups is reducing SKUs. The double walled-cup comes in three sizes — medium, large and extra-large — and will be used for all hot drinks, including coffee, tea and hot chocolate. Espresso and small-sized beverages will continue to be served in regular paper cups.

“Right now, we have four different hot coffee cups and two different lids for hot coffee, plus three espresso cups and another lid, so we’ll go from seven cups to four cups and three lids to one lid. For a store manager and the employee taking inventory and doing the ordering and filling, they’ll only have one cup to grab versus trying to decide what goes in which cup each time,” Goli says.

He also likes that the new cups will use the current lids for coffee, “Which is far more superior to the lids we have on the espresso cups. So now we have a superior lid with espresso drinks that we didn’t have before,” he says.

Another benefit of the new cups is that they don’t need a sleeve, which means one less thing to buy and stock. However, with all that said, Goli says the double-walled paper cup will cost more.

“So the question is does the operational efficiency that you gain offset the increase in costs? We don’t know this yet. If it does, it’s a winner,” he says.

Hoffman points out that some franchisees may be concerned about the change because often times, “The customer-facing unit can be fairly risk averse, thinking if it isn’t broke don’t fix it, and they may not have the broader view that corporate has,” he says.

As far as customers are concerned, Goli believes some will welcome the change right away, while others may be hesitant. “It will be interesting to see how they react to and trust not having a sleeve,” he says.

In Hoffman’s view, changes like these are rejected less when the customers understand the move.

“These type of changes should be accompanied with a marketing campaign about why they are doing this and why it’s a good thing rather than just imposing it on customers,” Hoffman says.

“When Home Depot moved to sustainably certified wood, they did a whole marketing campaign about it and 10 years ago when Whirlpool created front load washers, people didn’t want to buy them because they use less water and people thought they didn’t clean clothes as well, so they had to do a whole public relations campaign to explain to people why they are great.”

“It’s coming. There are a lot of places that don’t have plastic straws anymore. Someone the size of Dunkin’ can’t just say ‘I want to replace our straws and start tomorrow.’ If you don’t look at it now and know the options, by the time we have to do something it might be too late to react,” says Goli. “After all, it’s taken us 10 years to get to a paper cup. They announced the change early this year, but it will take until 2020 to fully transition.”