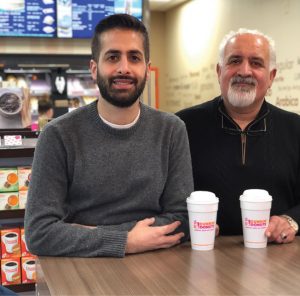 When you grow up in a family business, it’s easy to envision yourself someday taking over operations. But Misha Goli, whose father owned four Dunkin’ Donuts stores in their hometown of Oklahoma City, didn’t see himself following those footsteps. While he was content to work in the stores while growing up, once he went off to college – first to study business at the University of Tulsa, then to embark on an MBA-abroad program in Tianjin, China – returning to Oklahoma and the Dunkin’ brand wasn’t part of his plan. But once Goli completed his education in 2007, his father suggested he return and “try it for a year.” Twelve years and nine stores later, Goli hasn’t looked back.

“You think the grass is always greener, but I don’t think I would have appreciated Dunkin’ as much if I didn’t go away and come back,” he says.

Back to the roots

The story began in the 1970s, when the senior Goli, Massoud, emigrated to the United States from Iran. He went to work as a baker at a local Dunkin’ shop, which ignited his interest in owning his own store. In 1981, he bought his first store at NW 36 and May Avenue in Oklahoma City. Family photos depict a very young Goli, toddling along at his father’s side in the stores. And he was there all the way through high school, working and learning. But, as Goli remembers, things changed significantly when he returned from college and his MBA studies in China. He had a different view and broader insights, which he was eager to share with his Dad and the family. 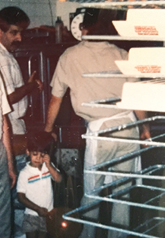 “My father had done a great job, but we had two different viewpoints. I saw a fresh start, rejuvenation,” Goli reflects. “These stores were his babies. For 28 years, he’d been working on them, from being a baker up to owner of four stores. He had the wisdom, and he’d seen it all. It took some time for us to find balance,” he admits.

But today, they represent a seamless integration of the old and the new; the younger Goli often seeking the experiences of his dad, who, in turn, voices his surprise to Misha about how much the brand and customer experience has changed.

When Misha took over, they had four stores in and around Oklahoma City – a city of about 600,000. Initially all their shops baked donuts on premises, but the family decided to close the original store and set up a Central Manufacturing Location. The three remaining stores were remodeled, and plans to expand were set into motion with the opening of the state’s first Dunkin’ / Baskin Robbins combo in Midwest City, about 15 miles east of downtown. Another combo store soon followed in Moore, just south on I-35.

One store in which Goli is particularly proud is located in the Uptown area – a region of Oklahoma City not far from where he grew up. Memories of this region conjure up a run-down locale, he describes as “not desirable, and part of why I didn’t think I’d end up living here.”

But in 2014, local leaders began efforts to transform Uptown, which was not only home to historic buildings, but plentiful in available space and home to a newly formed merchants’ association which fueled the momentum for new businesses and restaurants to open. Attractions already in place include the renovated and re-opened Tower Theatre, a movie and performance venue dating 1937, as well as nearby Oklahoma City University. 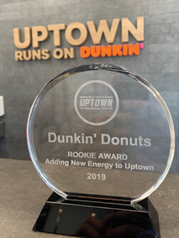 Goli saw an opportunity for Dunkin’, and in 2018, he opened a Next Gen store on what was previously a parking lot. The new building, which includes two other tenants, is positioned to thrive on both the bustling day traffic as well as late night patrons. An outdoor patio enables guests to sit and enjoy the vibrancy of the street, and a walk-up window – not yet operative – was installed with the walkable nature of the area in mind.

“I love cities, and the more things that come into Uptown, the better the district will get,” he says.

Particularly noteworthy for the locals is the store’s tap system. “Dunkin led the revolution in iced coffee and this tap system – with cold brew, iced tea, green tea, and nitro – will take it to the next level. We’re the only Dunkin’ in the city with nitro,” he says. “It’s a good fit for us to be in this spot.”

Giving back to the community

With nine stores humming along, Goli tries to stay mindful of giving back to the community his family has called home for over five decades.

One effort is an annual, month-long March of Dimes fundraiser, in which the stores donate 10 cents for every dozen donuts sold. Donuts are a popular menu item in the region, and donations have reached $9000. Adding to the fun is a special, limited-edition purple and white frosted donut, representative of the March of Dimes colors.

Goli’s group has also helped to bring some furry companionship to the children at the nearby Children’s Hospital at OU Medicine. As part of the Joy in Childhood Foundation’s Dogs for Joy program, Oklahoma City Dunkin’ stores have helped to secure a grant to fund an in-residence service dog at the hospital. Most children light up with a visit from a canine, but these dogs offer more than just comfort – they’re trained to perform tasks such as helping with medicine distribution, coercing the children to take a walk, and encouraging them to remain still for medical interventions. This year, the program placed 11 dogs in various children’s hospitals throughout the U.S.

The stores also take part in other fundraising efforts as needs arise, and frequently hold promotions to solicit donations to the area’s food bank. 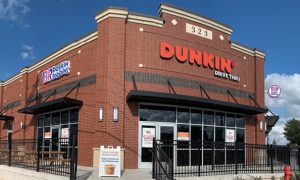 Recognizing the value of employees

Content in his role as a franchise owner, Goli recognizes the importance of creating a satisfying workplace for everyone involved. He strives for an open relationship with his employees, aware that the workers, whom he recognizes for being “out in front every day,” are a source of knowledge.

“I feel it’s important for me to remain open, even to being challenged. I welcome workers to question me and my ideas; either I’ll convince them why my idea is a good idea, or they’ll convince me that their idea is better. Either way – the best idea wins.”

He fosters an atmosphere in which he hopes employees are happy to come back to work every day. Some of his employees have been on board since the early days. Recently, they celebrated the retirement of a worker who started working for Dunkin’ Donuts in 1970. Pam Gibson was 21 when she took a job working overnights as a donut finisher. Later she shifted to day shifts and eventually became a store manager.

“We still have some long-time employees today that I worked with as a crew member. They’re the first to put me in my place,” Goli jokes.Looking ahead

Goli believes the franchisees who will be most successful in the future will be those who welcome change.

“The franchising industry is moving faster than ever, and today there’s an ever-changing workforce,” he says. “Franchisees need to be adaptable and take their employees’ background and experiences and mesh them to create a great organization.”

As for products, while donuts remain strong, he views some of the beverages – such as espresso and lattes – as having great potential. “Dunkin’ has barely tapped the market in that area,” he says, noting the brand’s reputation as an approachable, everyday coffee shop offering a great product at a reasonable price point.

Goli hopes to take advantage of the room to expand in and around the Oklahoma City area. After all, it’s a place he grew up in.