“Happy customers and happy employees. If you have those two things, you can do anything,” says Mark Pesce. With a business degree and 30 years of experience under his belt, the Massachusetts franchisee is no stranger to budgets and balance sheets. But if he had to sum up his business plan in one sentence, that would be it.

He just might be on to something. With that business motto, Mark along with his business partner and wife, Megan, have done what many would call unthinkable. In the midst of a global pandemic and national labor shortage, they’ve doubled the size of their company. “The people part of the business is the biggest piece. When times get tough, the key for us and the success for us is that we have a great relationship with our people.” Mark says earnestly. “I think that’s one of the things that sets us apart,” says Megan. 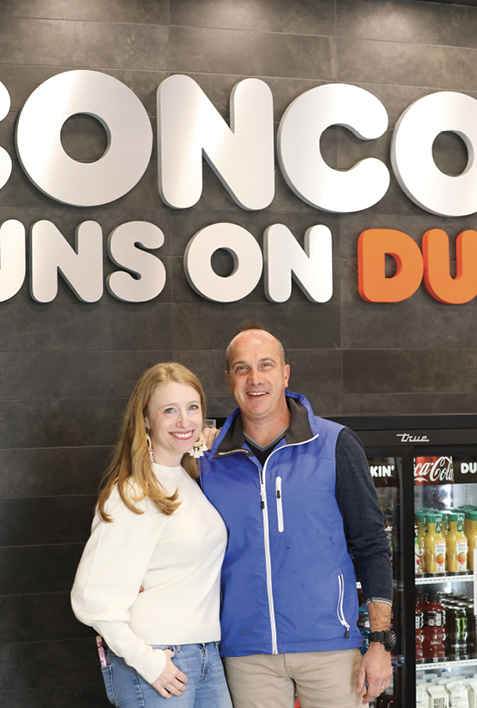 Listening to this entrepreneurial couple, it’s hard to deny their commitment to the business and their community. But before they were business partners, they were partners in life. You might say it was Dunkin’ and Disney World that brought them together. After graduating from college in 1995, Mark took a job in Winter Park, Fla. as a district manager overseeing five Dunkin’ locations. He had grown up in the business, working all through high school in his father’s three Dunkin’ locations, just north of Boston. He attended Dunkin’ Donuts University as an 18-year-old and now, armed with a college degree and a loyalty to the brand, he was ready for a new challenge. “That move taught me a lot about the business.” says Mark. “Not only was I District Manager, I ran the entire company, because the owner wasn’t living in the state.”

As chance would have it Megan, also a recent college graduate, was working at Disney World. “I was a Disney character. Actually, I was Quasimodo, because the movie had just come out,” laughs Megan. “I was also Chip ‘n Dale, Winnie the Pooh and played a role in the Little Mermaid show.” The couple met through friends of friends, and after discovering they were both Massachusetts natives living on their own in the Sunshine State, they began spending time together.

After a courtship, marriage and a move back to Massachusetts, Megan pursued a career in the financial planning industry and Mark accepted a position at Dunkin’ Brands as a retail business specialist (now referred to as a business consultant). In that position, he served as a liaison between the corporate office and franchisees. It was a perfect next step in his career, but when an ownership opportunity presented itself in 2003, Mark was ready. He left the corporate office, joined two partners and bought a group of Dunkin’ stores in historic Concord. Over the next 16 years, the ownership group grew the business to 60 locations in Mass., Maine and Pennsylvania.

The business was growing, and so was the couple’s family, with the birth of their sons Andrew, now 17, and Jack, now 14. With two young sons at home, Megan started thinking about a career change. She left the financial industry behind to pursue a life-long passion for design. After enrolling in the prestigious Boston Architectural College, she established Megan Pesce Interiors and quickly learned the ropes of running a small business while working with design clients in Boston, New York City and Los Angeles.

In the fall of 2019, the couple made a decision that would change their future, professionally and personally. Mark bought the 10 Bay State stores from his partners, and gave up ownership in the Pennsylvania and Maine stores. Megan left her design business to join Mark, and their company, the Pesce Network, was born. “We thought, if this doesn’t work, we’ll figure out something else because obviously, our marriage is more important than anything,” Megan says candidly. “But at the end of the day, I feel like it has brought us closer.”

In January, 2020 the Pesces bought four more stores. Timing is everything, and this timing couldn’t have been worse, because that month also brought the first confirmed case of Covid-19 in the United States. Within weeks, the pandemic was surging and, for all intents and purposes, the country shut down.

“It was really tough because many of my stores are in towns that don’t allow drive-thrus,” recalls Mark. “Like everyone, we had to pivot quickly.” With revenues down as much as 60%, and the public health landscape changing daily, the Pesces stayed focused on their recipe for success: happy customers and happy employees. “We knew we couldn’t close our stores, there were employees depending on that paycheck and we weren’t going to let them down,” Mark recalls.

The couple worked hard to keep their customers and team safe with increased cleaning and safety protocols. They also jumped in to help in their communities by providing meals for local hospitals and first responders. In stores without the drive-thru, they shifted to curbside delivery; in other stores, their teen-age sons stepped in to help. 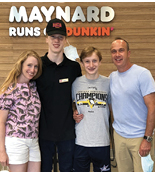 “Our son Andrew worked for several months through Covid when his school was fully remote,” says Megan proudly. “He would pride himself on working for hours as the order-taker at the drive-thru. Several times he called out something like, ‘I absolutely dominated that order,’ not knowing the microphone was still on. The car would pull around laughing hysterically. He certainly made people smile every day during a very stressful time.”

During this period, the Pesce family business not only survived, it expanded yet again, acquiring another four stores, a feat Mark describes as “mind blowing.”

Now with 19 stores in nine different towns, the couple is quick to recognize their team for their success. “We have people who have worked with us for 20 years and an incredible executive team,” credits Mark. He spends most of his time in the field, while Megan works with human resources and community relations. Both say there is no job they haven’t done, or won’t do. “You have to get out there and not be afraid to roll up your sleeves,” says Mark. “I’ll grab a mop bucket; I’ll do anything in the store.”

“People ask what we’re doing differently, why didn’t we have mass exodus during Covid?” Megan adds. “It goes back what Mark calls ‘the people piece.’ We care deeply about our employees and our community.”

The couple puts their care into practice with a robust benefits package that includes English as a second language classes for any employee who is interested. “We asked our employees what would help them the most and the number one response was English classes,” explains Megan. The company hired an instructor and now offers a class once a week, with plans to add additional classes. “We want to give our staff a path to a career in our company and we provide a support network to do that,” Megan says.

That support carries over to their community outreach as well. Megan works with the Dunkin’ Joy in Childhood Foundation, is a member of several small business associations and also sits on the boards of several nonprofits. Their company has provided free coffee for local women getting mammograms and participated in “Kicks for Cancer” in support of breast cancer patients. They also make frequent charitable gifts to local schools, museums and community events. 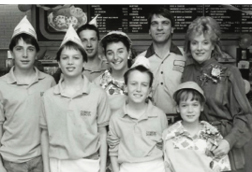 “We’ve looked closely at our giving plan to decide what we wanted to put our name on,” explains Megan. “One of the issues that is very important to us is food insecurity. We donate to all the food pantries in the towns where we do business, and we work with community councils in those towns to award grants to local charitable organizations.”

When they aren’t working or at a neighborhood event near their Dunkin’ locations, you can usually find the Pesces at a hockey rink. Both of their sons play hockey and when they’re not watching one of their games, the family is on a mission to see a game in every NHL arena in the country – a project the boys are excited about. Mom and Dad like to offset the chill of the ice rink with a beach vacation whenever they can grab one; it is one way the family stays balanced.

“Sometimes people look at Dunkin’ as this big corporation, and not something that has a real family behind it,” says Megan. “At the end of the day, we want to be the family behind the brand.” Mark agrees, saying his team has worked hard to get the message out that they are locally owned and operated. “Our customers are incredibly loyal to Dunkin’, and we know them,” he says. “If you look at other brands, an average consumer might go in once a week, or once a month. At Dunkin’ it’s once a day. There’s something very special about that.”