For Deo Braga, coming to America meant a fast track to opportunity. As a teenager in the Azores, Braga yearned for more. While attending college and working with his father, Manuel Furtado Braga, he ran a local bar and grocery store the family owned. His uncle, Barry Furtado, was already living in America and running a Dunkin’ Donuts restaurant in East Boston, Massachusetts. After gaining his U.S. citizenship, Furtado sent for Braga and his father to join him in America. Deo knew he could find work and an exciting, new life across the ocean, so when he and his father flew from San Miguel to Logan Airport in Boston, he felt it was his time. The calendar said February 1981, and although it was Friday the 13th, for Braga there would be nothing but good luck that day.

“I remember I got into my uncle’s car and I thought, ‘I’ve never seen so many cars before,’” Braga recalls. “I knew this was the right choice for me.”

It didn’t take long for Braga to learn the donut and coffee business from Uncle Barry. He quickly earned an opportunity to own his own Dunkin’ shops and expand his business beyond that. 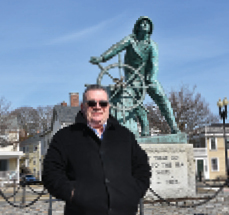 From the sea to the mountains

Braga had grown up near the sea, in a town called Vila Franca Do Campo so, in America, he naturally settled along the Atlantic coast in a city called Winthrop. He could smell the salty air when the wind was blowing in and would often catch the scent after dark, when he was heading into work to take his shift as a night baker. He enjoyed the work and eagerly listened for the phone in his apartment to ring during off hours in the chance another shift had come available.

Braga met his wife Paula when the two were children, living in the Azores. He recalls her walking by a rock pile where he was playing and “something clicked.” Now, newly married and with a young child, Braga was ready to make his next move. Franchisee Tony Couto had just acquired Dunkin’ stores in Essex Junction, Burlington and South Burlington, Vermont and he asked Braga to come north to help manage his three restaurants. With opportunity on the horizon, Braga settled into a new life as a Dunkin’ operator in a new community nestled in the Green Mountains.

“I was 21 at the time and I didn’t even know where Vermont was, but we moved there,” Braga says, even as he recalls the long winters in northern New England and how they made him long for the summers in the Azores. “[The experience] was great. I got to know every person that came into that store, and learned to be a good businessman and great American.”

It was through those conversations that Braga began to really understand what it was that customers loved about Dunkin’ Donuts, especially in small-town Vermont. It was the personal connection the operator – and his employees – made with the customers. They kept coming back because they felt welcomed and because they loved the product. Braga knew that meant he had to keep his restaurant looking perfect. He stayed in Vermont, working for Couto for 6 ½ years. Then, Braga received a call every child fears; his father had suffered a heart attack.

At the time, his dad was living in Cambridge and Deo wanted to be by his side. He realized it was time to leave Vermont and return to Massachusetts. That was 1988, and there was a Dunkin’ Donuts for sale in the famous fishing port of Gloucester. Braga was able to buy the location at 205 Main Street, which dated back to 1961 and was one of the oldest in the system. As fate would have it, the store became his anchor in this seaside community. 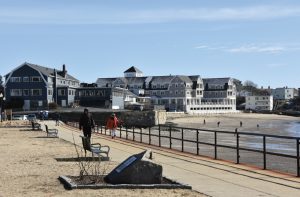 Life by the ocean

Gloucester was one of the first settlements in the New World, founded before Boston or Salem in the Massachusetts Bay Colony. By the mid-1700s it was of the major fishing hubs of the American colonies. By the late-1800s, immigrants from Portugal and Italy were settling there. Those roots, plus its place on the Atlantic, made it the perfect home for a man from the Azores who, as a child, “fell in love with the ocean.”

By the time Deo and Paula Braga purchased the Main St. Dunkin’, Dad was back on his feet. The couple rebuilt the decades-old restaurant, which Braga recalls with a bit of nostalgia.

“It still had counters for sitting and drinking coffee. It was very run down and had an old cash register and cigarette machine and public phone. I didn’t have any money at the time, so I sold [the machines] and made enough money to do over the ceiling, and buy new cash registers,” he says.

In 1992, Braga would open his second Dunkin’ Donuts, at the site of an old convenience store on Route 127, which is known as Washington Street in Gloucester. That location was large enough for the equipment and ovens necessary to bake donuts for both of his locations. It was, in effect, his first central kitchen—built years before Braga and a few partners invested in a large, central manufacturing facility in Peabody, Mass.

Braga remembers using his new Washington Street kitchen to create unique baked goods. “I used to make pastries and fruit squares and cinnamon twists. It was a local thing,” he says, but eventually they were discontinued because Dunkin’ Brands changed the rules regarding what bakery products franchised stores could sell. At that time, Braga’s Dunkin’ shop had little competition for coffee and donut customers.

“I used to be king here,” he jokes. “It was just me and a local donut shop down the street,” but today there is ample competition from independent coffee shops, bakeries and bagel shops. Some of those have names like: Two Sisters Coffee Shop, Cape Ann Coffees and the Lone Gull. Because these retailers offer uncommon, specialty products, Braga knows he has to rely on the strength of the Dunkin’ brand, which is beloved in these parts.

“People want good coffee and good service,” he says emphatically, while also pointing out, “You have to pay attention to the customer. They are smart and they can get coffee at other places,” but they will keep coming back if the coffee is good and they are treated well. The personal touch, Braga says, is the real way to earn customer loyalty.

“You can’t get loyalty by giving perks,” he says of the popular customer reward programs Dunkin’ and other retailers use. “You get loyalty through trust. You have to be friendly. They want to see you give great service all the time.”

After 20 years in Gloucester, Braga wanted to expand his reach in the community. Across the street from his Washington Street location was an old bait shop and bar called the Depot Café, which was used as a location shoot for the 1998 film, “The Love Letter,” starring Kate Capshaw and Tom Selleck. In 2008, the building came up for sale. Braga bought the property with the idea of building apartments, but later saw it as an opportunity to open a full-service restaurant, and fulfill a dream he’d always had.

At the time Braga was building out his new restaurant, which he named for his island home, the nation’s “great recession” was taking hold. “In August 2008, I was in Portugal watching CNN and heard about the economy failing,” recalls Braga about the news that the government-backed mortgage companies Fannie Mae and Freddie Mac had gone bankrupt. “I thought, ‘Whoa, this is not good,’” he says. But, Braga pressed ahead, opening the Azorean Restaurant to rave reviews for its authentic Portuguese food and one of the best wine lists on the North Shore of Massachusetts.

“For two or three years, we didn’t do that well. But we gave it time and I learned how to control costs and make sure we sold wine that was good and at a good price.”

One of the advantages of having a restaurant whose menu relies heavily on fish and is located two miles from one of the nation’s prime fishing ports, is the ability to offer the freshest food anywhere. Not only does Braga buy his fish from local fishermen, he knows the date the fish were caught and the name of the boat that secured the catch.

Having followed the Dunkin’ playbook for so many years, Braga knew that consistent advertising and local sponsorships would be crucial to creating customer awareness of his restaurant. One of the reasons the Azorean is such a popular location is because Braga advertises.

“I learned with Dunkin’ you have to advertise,” he says. “I use Facebook, Instagram, TV and radio. I also use direct mail to help [bring in] local customers. Dunkin’ Donuts always did a lot of newspaper ads and direct mail. People came in with their coupons. It helps them.”

As a Dunkin’ operator, he’s also learned the importance of “controlling prices and giving good quality.” The Azorean Restaurant and Bar has an impressive wine cellar, featuring wines from Portugal, Italy and California—but most are considered affordable. “Expensive wines don’t sell,” Braga says. So, he makes sure he has plenty to offer customers seeking a wine to complement their entrée without breaking the bank. Since opening the Azorean, Braga has expanded the restaurant three times to keep up with demand.

Investing in the community

Early in 2016, Braga made another investment in his community. He purchased a few buildings on Main Street and remodeled some of the ground floor space into a restaurant and bar called Trio, offering Portuguese, Italian and American fare. The restaurant and bar features traditional fare and large black and white photos of prominent Italian celebrities, like Frank Sinatra and Dean Martin. The menu, created by Braga and head chef Manny Lapa, promises dishes that “we all know and love, crafted from the best ingredients… comforting, and always delicious.” With a full bar and outdoor seating, Trio features an atmosphere that is casual and hip.

Originally, the concept for Trio was to create an Italian restaurant for local people to enjoy. But, Braga realized that because a third of Gloucester’s residents are Italian, many choose other kinds of food when dining out.

“Many Italian restaurants [in Gloucester] fail because people eat at home where, mom and grandma cook real Italian food,” he says. By offering a blended menu – and a cool, urban atmosphere – Trio can draw locals and out-of-town visitors.

Something else Braga and his wife have learned in their years running restaurants, “You go to a restaurant because of the food and the service—not the owner.” While many people know the Bragas and trust their reputation for operating clean, service-oriented restaurants with great coffee, food and wine, he knows he can’t take anything for granted.

Much has changed for Deo Braga since he stepped off the plane in Boston 37 years ago, but not his instinct. “Maybe I was lucky getting my job as a night baker at Dunkin’ Donuts,” he says. “I took advantage of a good business. This is America and I knew I could do anything.”