By AdministratorPublished May 19, 2010Category Franchise News 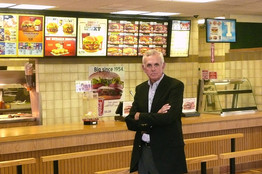 Steve Lewis, owner of 36 Burger Kings in Pennsylvania and New Jersey, is an outspoken critic of the company's strategic direction. Photo by: Greg Winans

Richard Gibson reports in the Wall Street Journal that a letter to Burger King Holdings Inc.’s board bristled with anger and frustration.

“Gentlemen, frankly, our business is in deep trouble,” it warned, pointing to what it called “two ill-conceived decisions” by the chain’s management that “violate the rights of our Franchisees and harm our business…. Your management team has pushed the Franchise Community to the brink.”

Signing the letter were all 21 directors and six officers of the Burger King National Franchisee Association Inc., which represents most of the brand’s independent restaurant operators. Twelve days later, Burger King’s board sent out a letter—addressed not to the association but “Dear U.S. Franchisees”—expressing “full and unanimous support” of top management and contending that operationally and financially, the brand was “in a much better position…than it was six years ago when we hired this management team.”

That exchange last November encapsulates a power struggle that has been roiling the approximately 12,000-unit restaurant chain for nearly six years. The franchisee group argues that management has hurt store owners with its marketing strategies and other moves. Management has distanced itself from the association and replaced franchisee advisory committees, which had given franchisees a big say in business decisions. The company also accused the group, in a letter to its leadership, of hampering brand-building efforts.

Relations became so antagonistic that last year the association took the extraordinary step of filing two class-action lawsuits challenging management decisions. One suit, filed in U.S. district court in San Diego, came after the company sought to divert to national advertising millions of rebate dollars that franchisees get from Coca-Cola Co. and Dr. Pepper Snapple Group Inc. for selling their beverages. That suit was dropped after the company agreed to augment its ad budget by other means.

The other association suit opposed a company mandate that franchisees sell a double cheeseburger for $1. That suit, still pending in federal district court in Miami, contends that management can only suggest prices franchisees charge. Franchisees had voted down the proposed sandwich, arguing they would lose money at $1, but Burger King introduced it anyway. In court papers, the company argued that an appeals-court ruling in another suit involving pricing gave it the right to make the move. Since the filing, Burger King has taken the double cheeseburger off its $1 Value Menu, and raised its suggested price, but announced plans to add more items to that menu.

Burger King also faces a suit brought by three franchisees—two are in the company’s Hall of Fame for exceptional franchisees—challenging a mandate that they keep their restaurants open late at night. It “costs franchisees $100 an hour, but they gross only $25 to $30 an hour,” says Robert Zarco, a Miami attorney representing the plaintiffs. The two sides are awaiting a hearing on the company’s motion to dismiss that litigation, which was filed in Dade County Circuit Court in Florida in December 2008.

The company filed a spate of suits earlier this year as well—some threatening to default franchisees who the company says haven’t upgraded their checkout terminals as quickly as management wanted.

A spokeswoman says Burger King doesn’t comment on pending litigation. As for its relations with franchisees, and their complaints, the company didn’t make senior executives available for interviews but says it “maintains open and direct communication with our franchise system, including dialogue with the leadership of both the national and regional levels of the National Franchisee Association.” And in an email, Burger King’s North American president, Chuck Fallon, wrote, “We remain wholly committed to finding innovative ways to work collaboratively with the entire system to enhance our brand positioning around the world.”

During a recent presentation at a Morgan Stanley investors conference, Mr. Fallon said, “We have put our best foot forward over the last six months to try to improve that relationship” with franchisees. He alluded to “mistakes we’ve made over the year, and are working our tails off to try to improve those relationships…. We’ve been on a very active campaign to be more effective at communicating, collaborating with our franchisees, explaining the why behind the what.”

While squabbles between a franchiser and its franchisees aren’t uncommon, those at Burger King are notably bitter, and have drawn Wall Street’s attention. Citing the continuing hostilities, two brokerages have downgraded Burger King’s stock. “Tensions with franchisees will limit franchisees’ willingness to make the investment [in remodeling] for their stores,” Credit Suisse said in changing its rating to “neutral” from “outperform” in January. In cutting its rating that same month, to “perform” from “outperform,” Oppenheimer & Co. said among other things that relations between management and franchisees had “soured markedly.” The stock trades about 20% above its $17 initial public offering price four years ago.

The genesis of the difficulties is partly rooted in the chain’s historic structure. About 90% of Burger King restaurants are franchisee-owned and operated—a higher percentage than many franchises. Over the years, that gave franchisees outsize influence, several former executives say. In the 1990s, for example, franchisees helped rewrite Burger King’s franchise agreement—a document that was widely copied in the industry.

Still, even as franchisees’ power grew, cracks began to appear in the relationship with management. Since 1989, for instance, the chain has had 10 chief executives. The executive suite’s revolving door bred wariness and uncertainty among franchisees over management’s priorities, operating style and expectations, several veteran franchisees say.

Presiding over a large franchisee community can pose unusual management challenges. Burger King’s franchisees are diverse, ranging from third-generation operators to those new to the system, from passive participants to outspoken activists. Also in the mix are a few franchisee companies with dozens of restaurants—unusual in franchising.

In 2001, franchisees, who openly expressed criticism of the way then-owner Diageo PLC was managing the brand, pushed hard for the chain’s sale. Early on, some retained an investment banker to pursue a possible buyout of the fast-food chain by them. Eventually, three Wall Street private-equity investors—Goldman Sachs Group Inc.’s GS Capital Partners, TPG Capital, and Bain Capital LLC—stepped in to acquire the business for $1.58 billion. (Burger King’s revenue in fiscal 2009 totaled $2.5 billion.)