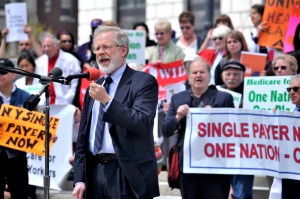 Notwithstanding that this is only the second year where the Obama Care exchanges are open for enrollment and despite the difficulties involved in year one enrollments (above), the New York Assembly will again be considering the adoption of a universal “single-payer” coverage model.   Democrat state Assemblyman Richard Gottfried, representing Manhattan, has filed legislation proposing the adoption of the government-run health insurance program for the fifteenth consecutive year, having first filed it in 1999.  He also advocated for its adoption in a New York Times Letter to the Editor last month.  Notwithstanding that New York Health, as Gottfried calls his single-payer proposal, will likely not pass the republican-controlled state senate, the bill has been scheduled for a host of public hearings around the state.  Gottfried is the Chairman of the New York Assembly Committee on Health.