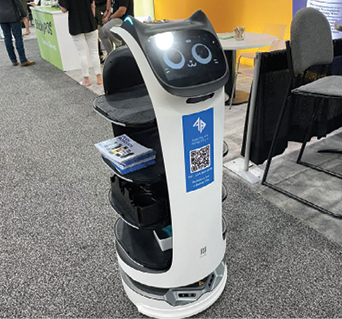 Facing a continued staffing crisis and growing labor costs, many businesses are looking beyond the next hire. Consider the barista who never calls in sick or the coffee-making bots that brew up to 300 portions per shift, work 24/7 and never take breaks, except for refilling or cleaning. In many ways, the crippling U.S. labor shortage is just what the engineer ordered—a way to broadly integrate robots armed with artificial intelligence and other automated machines into the day-to-day operations.

The dream of replacing workers who are expensive and unreliable with robots has been around for over a century. The dream has been a primary driver of automation, says University of Pennsylvania researcher Ruth Cowan, a historian of kitchen automation. “The 17-year-old fry cook isn’t expensive labor, but the 17-year-old becomes expensive labor if he or she doesn’t show up for work,” she told the Wall Street Journal.

And now, the automation of jobs is on warp speed, accelerated by the COVID crisis. Increased automation occurred during other previous economic downturns as well, including the 2008 financial crisis, when employers invested in technology with the hopes of reducing labor costs. “Automation happens in bursts, concentrated especially in bad times such as in the wake of economic shocks, when humans become relatively more expensive as firms’ revenues rapidly decline,” wrote Mark Muro, a senior fellow and policy director at the Brookings Institution’s Metropolitan Policy Program in a recent blog post.

In 1912, Horn and Hardart opened America’s first automat in Times Square. It was a serve yourself cafeteria that changed the concept of eating out. Using a vending machine created in Germany, Horn and Hardart began offering diners the chance to choose the food and beverage they wanted from a glass enclosed case by slipping coins into a slot that opened the door to a snack or a meal.

Interestingly, the Horn & Hardart automat (named for the two innovative Philadelphia restaurateurs) became a runaway success, in part, because of the Spanish Flu pandemic that gripped America from 1918-1920. But, it was the food that kept people coming back. Horn & Hardart was famous for its baked beans, macaroni and cheese and tasty pies. The coffee, which was brewed every 20-minutes, was the automat’s most popular item.

According to the magazine Interesting Engineering, automats reached their peak of popularity in the 1950s serving over 800,000 customers a day in New York and Philadelphia, but soon after, lost their allure to fast food restaurants with drive-thrus. The last Horn & Hardart, located near New York’s Grand Central Station, closed in 1991. Visitors to Europe, however, can still enjoy an automat meal. The Netherlands features several automats, the most popular of which, Febo, is open 24-hours.

Now, the magazine says there is renewed interest in automats because of the coronavirus pandemic and the desire to limit personal contact with (hard-to-find) restaurant workers. Unlike the original machines, today’s automat designs do not accept nickels.

The automation of jobs is also being accelerated by minimum wage hikes, an unprecedented labor shortage and workers quitting at record levels. One recent survey showed that 91 percent of U.S restaurants will invest in kitchen automation in 2021, according to new data from the payments company Square. “Companies are picking up their tech game to try to get an advantage in finding customers,” says Jonathan Maze, editor-in-chief or Restaurant Business magazine and a longtime industry journalist.

Automation in fast food restaurants is nothing new; think kiosks, point-of sale integrations, apps that enable remote management, mobile devices and software integration. But the current automation push is compelling restaurants to consider technology that they might have been reluctant to consider in less compelling times, Maze says. The increased demand for delivery and takeout, minimal margins in delivery and scarce labor is adding fuel to the technology fire. Add to that, the declining cost of actuators and sensors plus more powerful software and AI, and it’s a formula for rapid tech adoption.

“Technology is always cheaper than people,” Ed Renis, former McDonald’s chief executive in the U.S., told Fox Business. In fact, a report from the World Economic Forum last year said that the workforce is automating faster than expected and will displace 85 million jobs in the next five years.

We all know about McDonald’s testing voice-ordering technology to take customer orders for French fries and Big Macs. CEO Chris Kempczinski said the restaurants are seeing about 85 percent order accuracy and can take 80 percent of orders. The technology will likely take more than one or two years to implement according to Kempczinski and the fast food giant is also looking into automating more of the kitchen, such as its fryers and grills.

McDonald’s is just one example of machines doing more work in fast food restaurants. DDIFO Restaurant Analyst John Gordon, founder of Pacific Management Consulting Group, points to others. At Starbucks, for example, the internal artificial intelligence program “Deep Brew” is an experiment with machine learning and artificial intelligence designed to personalize the drive-thru experience and automate time-consuming tasks such as inventory management and labor scheduling. Taco Bell is using AI in its in-store kiosks to suggest products; Cracker Barrel is among the latest to roll out a mobile app that lets customers pay for meals; Dave & Buster’s plans to expand contactless ordering; White Castle has installed a robotic burger flipper, and Dominos is working to add voice ordering capabilities to phone orders. And Inspire Brands, Dunkin’s owner, will feature an artificial intelligence robotic kitchen assistant among other automated features in its new Innovation Center, according to a company executive. (Read more about Inspire’s Ghost Kitchen project on page 12.)

“The pathway forward is going to be in tier-one brands with a strong franchise system and healthy marketing funds, so the brand can figure out where to come up with capital expenditure dollars to invest in technology,” says Gordon. He thinks automation is especially suited for QSR drive-thrus, as customer expectation is not face-to-face interaction, and speech recognition technology can now supposedly understand complex orders.

Is automation working? Productivity surged 5.4 percent in the first three months of 2021 according to Business Insider, the fastest rate of improvement in two decades. This jump came as businesses started rehiring, suggesting the increase had more to do with the continued use of pandemic-era tech.

Noah Smith, a Bloomberg Opinion columnist and former assistant professor of finance at Stony Brook University, says that despite fears that automation can reduce the labor force, automation can actually optimize job growth. He cites past periods of innovation — from the dot-com boom to the industrial — in which tech didn’t eliminate jobs, but shifted them elsewhere.

Misconceptions about AI in the workplace have long been a barrier to widespread adoption— even digital natives (think millennials) might have concerns, such as about privacy and data security, says Gordon. And technology can’t replace the human element and intuition. “But the combination of human experience, touch and intuition with artificial intelligence and other technologies can produce a very strong impact on the service world,” says Michael Cheng, dean of the Chaplin School of Hospitality and Tourism Management at Florida International University.

As economist Smith wrote in his blog, Noahpinion, “Do we really think that QR code ordering in restaurants will be the innovation that finally renders humans obsolete? Do we really think that wandering around a restaurant saying, “Are you still working on that?” was the last thing that the average human being was good for, and after this we’ll never be able to find something new for people to do? I don’t believe that. I believe we’re only at the beginning of our quest to unlock average people’s true economic potential.”