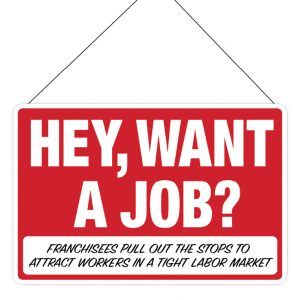 We don’t need to tell you about the labor shortage in QSR restaurants. It’s probably one of the things that keeps you up at night. It’s definitely an issue for Alex Fernandez, who owns one Dunkin’ shop in St. John’s County, Florida, and five other locations in neighboring counties.

With an unemployment rate of 2.8 percent, St. John’s County ranks lower than the national average. Considered part of the Jacksonville metro area, St. John’s County’s major city is St. Augustine, which is home to many golf courses and a tourist industry served by restaurants, fast food chains, and hotels – all of which are competing for a shrinking workforce. This county can serve as a case study for the struggle for low-wage workers. One small business owner there says that there’s such a finite talent pool that employees can play “restaurant bingo,” hopping from one job to another. At one point, the local press reported a Dairy Queen temporarily closed its doors because the management couldn’t rely on its staff to keep the shop running.

For Fernandez, who has been in the Dunkin’ system since 2011, the labor crisis has prompted him to re-evaluate his approach. In this highly competitive marketplace, Fernandez says he wants to “be hiring every day.” How does he approach it? He instituted an employee referral program, paying $25 to the employee who refers a successful candidate. He also posts signs to solicit walk-up inquiries and posts ads on local job sites. He says his managers and staffers are constantly on the lookout for available help.

And, he puts his money where his mouth is. Fernandez boosted wages for incoming employees well beyond minimum wage of $8.25 per hour and then instituted financial bonuses for workers who reach 90 days of service and then one year of service.

Then there’s recruiting. Fernandez found a creative approach, hiring workers from a women’s substance abuse recovery home. He found people who are looking for ways to re-establish themselves in the community and an opportunity to add to his staff—a situation he found to be mutually beneficial. “We have had several that have grown from crew member to shift leader or store manager. They made a big turn in their life,” he says.

In Ohio, where Tiffany Gallo is director of human resources and training for White Donuts – a group of 24 Dunkin’ stores in the Youngstown area – there is a company-wide emphasis on hiring.

“It’s not just up to the field team in the offices – it’s now a constant conversation and constant talk, and all hands are on deck for hiring,” says Gallo, who told us in December that over 10 percent of her 700 total positions were currently open. With competition coming from manufacturing, local big box stores, and other retail jobs, Gallo says hiring is a priority for all, not just for HR.

White Donuts has mounted “help wanted” boxes on drive-thrus and windows containing hiring cards, which give a link to the White Donuts’ “two minute application.” This is a simple list of five to eight questions, after which the form goes directly into the store manager’s email. Gallo calls the move an important step in the “talent race.”

“Every time we hand out a business card, on the back is hiring information and our hiring website.” The company has also raised wages above minimum wage and does reviews twice a year, re-assessing salaries to keep crew members happy.

Such strategies have become par for the course for some time across the Dunkin’ footprint. Even before he stepped out of the CEO’s office last year, Nigel Travis told Business Insider that labor shortages and the battle to hire and retain workers is the biggest problem facing the fast-food industry. This year, Dunkin Chief Operating Officer Scott Murphy was quoted in The Wall Street Journal saying, “I’ve never seen the labor market this tight. We spend a lot of time training people and a month later they walk out the door.”

Every time the revolving door turns in a quick service restaurant it costs the operator about $2,000, according to data from TDn2K, a Dallas-based restaurant research firm that studied the costs of replacing the average hourly restaurant worker.

At that price, automation begins to look a lot more attractive. And, while mobile ordering apps and in-store ordering kiosks come online, many operators are finding the new technology still requires people to work alongside the machines and be able to assist customers who have trouble with the user interface or questions the computer can’t answer. According to research from the MIT Technology Review, the stress employees feel to learn new gadgetry – especially if their employer is skimpy on training – is a factor contributing to the record-high turnover of fast-food employees.

The idea of a robot flipping your burger and a drone delivering it to your table is still more science fiction than reality. But, the industry is finding more mundane tasks for robots to perform, like cleaning and printing labels. Such automation can improve an operator’s efficiency while sparing hourly employees from menial work and keeping them more customer-focused. In a super-tight labor market, that can make a real difference. 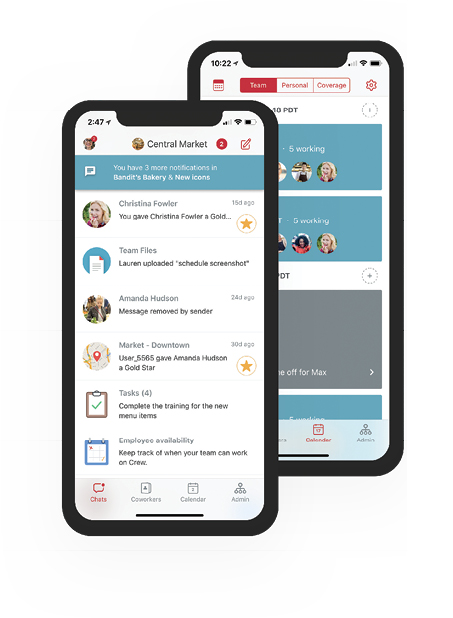 Long before this current labor shortage exploded, franchisee Ed Wolak was taking steps to invest in his people. The Wolak Group has grown to nearly 100 Dunkin’ restaurants in New England and upstate New York and employs close to 2,000 people. He provides incentives like flexible work schedules and discounts on food and beverages to all his employees. Those who reach certain mileposts, like 1,000 hours of service, can receive health benefits and tuition reimbursement as well.

Last year, the Wolak Group opened a Career Development Center in Syracuse, NY, where employees can seek mentorship and gain knowledge to keep them competitive in today’s workforce. It also serves, Wolak says, to educate the public about opportunities that exist generally within the quick service industry and specifically within the Wolak Group.

“We built it this way so employees could get real world experience while getting trained,” says Wolak, who believes it is the only career development center of its kind in the Dunkin’ system.

“The quick service restaurant industry has created lots of opportunities for individuals, but generally it gets a bad rap,” Wolak told Independent Joe. “Yet there are numerous examples of people who start in entry-level jobs and with mentoring and hard work they earn their way to top management.”

Of course, not all those who take jobs at a Dunkin’ shop are looking to make a career in the QSR industry. Many are just working for the paycheck. Scott Absher, co-founder and CEO of ShiftPixy, a tech platform that matches employers with qualified workers, advises employers consider giving workers flexibility in their schedules, if they can—especially if they want to attract millennial workers. That demographic, he says, puts great value on flexibility and control over when they work.

“Employees in the QSR industry don’t always have much control over which shifts they work and how many hours they receive, which feeds into the high turnover seen in the industry. One strategy operators can consider is leveraging concepts from the gig economy and offering more control over schedules,” Absher says.

Something else that makes a difference is workplace culture. The concept of creating a place where people enjoy coming to work has taken on more importance as employers have watched staffer after staffer leave for more money elsewhere or a different challenge. Fernandez defines the strategy in simple terms: “Keep workers happy, and they’ll stay.”

On the employment page of its website, the Wolak Group states, “We have fun and celebrate our successes together.” They offer flexible scheduling “because we value the skills that every employee brings to our restaurant.”

Recognizing that employees want to be heard and valued, White Donuts has implemented a program called CrewApp, which gives frontline employees a simple way to communicate, remain engaged and be more successful. “We emphasize family atmosphere, core values, and emphasize praise and recognition,” says Gallo. “It’s a pretty big deal.”

Bottom line, the fast food worker shortage “is probably going to get worse before it gets better,” says Gallo, who is optimistic that with innovative ideas and a commitment to truly engage with employees, the company can continue finding quality people to work behind their counters.

“We are willing to give anything a shot,” she says.