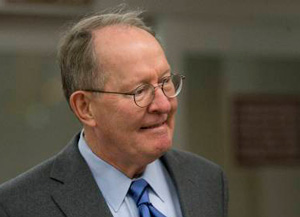 The NLRB “was supposed to be an umpire. It was created 79 years ago for that purpose. Over time it has become more of an advocate for one interest group or another depending on whether we had a Republican or Democratic administration in power,” said Sen. Lamar Alexander, R-Tenn., the legislation’s sponsor.(AP Photo/Pablo Martinez Monsivais)

In the wake of a public hearing last week on the issue, Republicans in the US House of Representatives this week filed legislation that seeks to force a redirection of the National Labor Relations Board back to its historical role as an arbiter of labor disputes rather than an advocate of labor expansion.  The proposal seeks to add one additional member from the minority party to the ruling Board thereby making the composition three members each from the ruling and minority parties.  The NLRB was originally created to serve as an impartial judge to adjudicate labor disputes within the private employment arena.  It is now perceived however, largely through the radically labor-advocacy appointments by President Obama as a biased advocate of unionization within private employment circles.  That perception was supported by a number of decisions the Board rendered with members Obama had appointed as “recess appointments” in his first term when the Senate was not in recess.  The US Supreme Court in NLRB v. Noel Canning et al ultimately overturned the appointments as unconstitutional.  In a subsequent agreement with Congress, the President’s appointments were legally ratified by the Senate.