By Peter R. SilvermanPublished July 17, 2015Category A Look at the Law 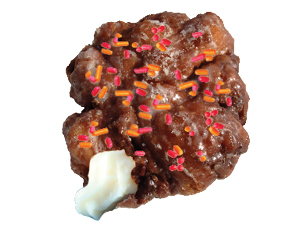 Imagine an apple fritter filled with cream and grape jelly and covered with mixed sprinkles. That’s a good analogy for Dunkin’ Brands’ dispute resolution clause in your franchise agreement – a mish-mash.

Before delving into the specifics of Dunkin’s clause, here’s some background on dispute resolution clauses. Unless a different procedure is spelled out in the contract, disputes over contracts are resolved in court. Whoever brings suit picks the court to sue in (so long as the other side has minimum contacts with the area), you get a jury (for claims other than an injunction), and you can ask for any damages allowed under the common law or statute. You can also use all the procedural rules that courts offer – including bringing one consolidated action with others against the same party, or even bringing a class action. Unless a statute provides otherwise, each party pays its own attorneys’ fees.

Franchisors don’t like this. They can be sued anywhere for any damages by any number of franchisees, and a jury would determine their fate. So, they include a dispute resolution clause in their franchise agreements. These clauses are common in commercial contracts. What makes them different in franchising is that the franchisors write them to serve their interests, and usually won’t negotiate them.

For franchisees, these clauses tend to range between moderately and grossly unfair. For franchisors, they are a risk management tool, and franchisors believe they’re necessary to allow the system to function without the unstable risk posed by litigation not constrained by a dispute resolution clause. As a general rule, the clauses are enforceable, though there are limits.

A common clause contains some or all of the following:

• waives lost profits, except the franchisor is entitled to seek future damages under the franchise agreement;

• waives the right to a jury;

• waives the right to bring a consolidated or class action;

• requires the franchisee to arbitrate disputes, while reserving to the franchisor the right to bring certain actions in court;

• requires the court proceeding or arbitration to be brought exclusively in the franchisor’s home town; and

Dunkin’s dispute resolution clause mixes and matches these, and to my mind is closer to the moderately unfair pole on the axis of unfairness. Some of my description may be a bit technical, but I want to give you a feel for how it works.

Section 15.0 provides that you waive class and consolidated actions, jury trial, punitive damages, and lost profits (except the franchisee remains liable for future amounts owed under the franchise agreement.) The waivers are written to apply to both court and arbitration, but you may be able to overcome some of the provisions in a court lawsuit.

Section 15.1 allows, but doesn’t require, either party to bring arbitration against the other. The clause provides that arbitration will be in the state of the franchisee’s restaurant (a concession most franchisors don’t make). The clause adds some bells and whistles to arbitration that probably makes it more procedurally fair, but also adds significantly to the cost savings that arbitration can offer compared to a court hearing. For example, the rules of evidence apply and arbitrators are required to write full opinions. Finally, Dunkin’ may proceed against franchisees under the expedited rules in arbitration if Dunkin’ is trying to collect money, and it’s also allowed to bring certain counterclaims in court.

Section 15.3 provides that if the parties arbitrate, they can appeal to a third party arbitration panel or court. This adds to the cost of arbitration as, absent this clause, it’s nearly impossible to successfully challenge an arbitration award.

So what does this mean for you? If Dunkin’ sues you, look closely at that clause to see if Dunkin’ has gone beyond its rights under the clause, and to see how the clause limits your procedural rights and rights to seek damages. If you want to sue Dunkin’, you can choose arbitration or court, subject to the clause’s limitation on your rights.

The Dunkin’ Brands clause is unusual and complex. Make sure to use an attorney who is sophisticated and experienced in franchise litigation, and one who will explain to you all your options, the limitations the clause places on you, and how all that affects cost, timing, and the potential outcome of the dispute. •