By AdministratorPublished May 10, 2010Category Competitors News

Peter Romeo QSR Magazine reports that there are five P’s at the basis of McDonald’s recent success, and the company’s CEO says it’s not rocket science to figure out how to make a profit in this industry. 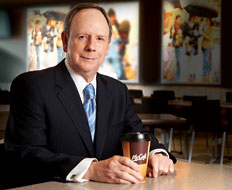 When a poster of McDonald’s Plan to Win was taken off a wall in corporate headquarters for a freshening-up, chief executive Jim Skinner personally intervened to get the strategy statement back in place ASAP.

“I told people, never, ever take the Plan to Win down and leave it down—do whatever it takes to replace it,” Skinner says. “People might see that and think, ‘Oh, Plan to Win’s down. There must be a change strategically.’”

A change in direction may well be the last thing wanted by McDonald’s management, stockholders, loyal franchisees, suppliers, and perhaps even customers. Studies have shown that Ronald McDonald is nearly as well known as Santa Claus. Awareness of the brand’s dominance in the U.S. restaurant market may be even higher.

McDonald’s U.S. sales topped $30 billion last year, outstripping the next-closest competitor, Subway, by $20 billion. If Subway were suddenly to merge with Burger King and Starbucks, McDonald’s would still rank No. 1 on QSR’s annual QSR 50 rankings, by a margin nearly equaling the systemwide sales of Dairy Queen.

Skinner Speaks Performance in the U.S. vs. the rest of the world: Everyone is talking about, ‘Well, what happened to the U.S.?’ Let’s just look from a realistic standpoint: Seven years of same-store sales growth [versus six years worldwide]. That’s an all-time record both for McDonald’s and I’m sure for anyone else in the industry.”Skinner recently observed to investors that McDonald’s captured 11.3 percent of the “informal eating out market,” or more than $1.10 of every $10 that’s spent in a limited-service establishment. But the real poke in the eye for competitors is a sense that the brand is unstoppable, even by the Great Recession.

U.S. comparable store sales increased in 2008 and ’09, as they had for the five years before. The gains of 4 percent and 2.6 percent, respectively, came as overall industry sales were in significant decline. The biggest, some muttered, was getting even better at outperforming everyone else.

“They deserve a lot of credit in a very tough environment,” says Mark Kalinowski, an analyst who tracks McDonald’s and a number of other quick-service chains for Janney Montgomery Scott in New York City. “Out of all the national and the big regional chains, McDonald’s is putting up the best numbers of any of them.”

The underlying factor, according to Skinner, is the Plan to Win, the credo that was implemented seven years ago after a rare and nearly disastrous period of drift for the chain. At its heart are the general areas of focus known in every nook and cranny of the organization as the Five P’s—People, Products, Place, Price, and Promotion. Also stated are such goals as serving more customers more often in ways that enhance brand loyalty and profitability.