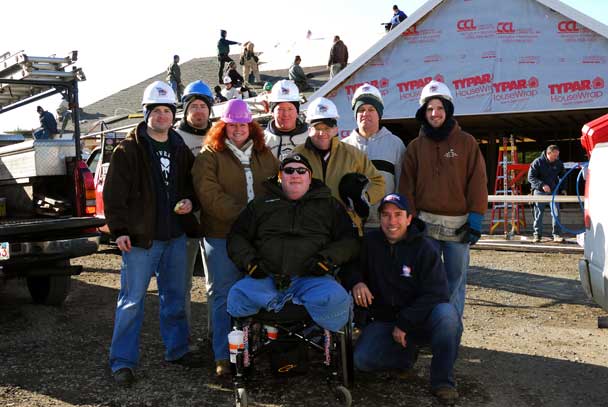 Jeannie Nuss reports in the Boston Globe that hundreds of contractors, students, and other volunteers are turning out in Middleborough this weekend to build an accessible home for a veteran who lost both legs in a roadside bomb explosion in Afghanistan.

Homes for Our Troops, a Taunton-based non-profit group, organized a three-day building brigade to raise a house for Staff Sergeant Mike Downing.

The house will have wider hallways and accessible doors to allow 43-year-old Downing to get around in his wheelchair. The kitchen will feature lower cabinets and the bathrooms will have roll-in showers.

“Even when it comes down to things as simple as doing the laundry, everything is set up so that I have access to it,” Downing said in a telephone interview.

Downing, a father of four, lost both legs after an improvised explosive device (IED) detonated in Afghanistan in September 2008.

The Downings are slated to move into their new home in March. The new home is about 2 ½ miles away from their current multi-story house where Downing faces challenges in everyday tasks.

“I go up the stairs on my rear end. I have to go up one stair at a time,” he said. “And then when I’m up there, someone has to carry my wheelchair for me.”

Volunteers came out in such numbers this weekend that they had to set up a shuttle from a parking lot at a nearby high school.

“There isn’t enough room for everybody to park here — there’s been so much help,” Downing said.

Homes for Our Troops has built 48 accessible homes like Downing’s since John Gonsalves founded the organization in 2004. Another 33 homes, which each take about six months and $275,000 to build, are in the works.

Donations from organizations like the Dunkin’ Donuts & Baskin-Robbins Community Foundation cover the cost of the houses, which go to the veterans for free, according to Vicki Thomas, a spokeswoman for Homes for Our Troops.

“It just enables him to be a part of his family, to participate in things, to go out to his backyard,” Thomas said.