The Illinois Special Olympics are held annually and are accredited by Special Olympics, Inc., which operates in all 50 states and more than 180 countries around the world. 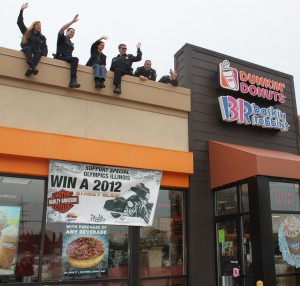 In just 1 day, Illinois Dunkin' Donuts raised $243,000 for Special Olympics during "Cops on the Roof."

Dunkin’ customers stopping by for their usual morning pick-me-up on June 1 may have been surprised to look up and see police officers – not to mention a few celebrities, in some cases – on the roof of the building. It was the Illinois Dunkin’ Donuts franchisees’ way of “shouting from the rooftops” to help Illinois police officers raise money and increase public knowledge about a very important cause: the Illinois Special Olympics.

Across Illinois, independently owned and operated Dunkin’ Donuts hosted “Cops on the Roof” to support the Illinois Law Enforcement Torch Run, which benefits the Special Olympics.

For the 10th year in a row, police officers staked out rooftops at about 130 Dunkin Donuts in Illinois starting at 5 a.m. Customers who donated were thanked with a free donut.

Dunkin’ Donuts believes in the Illinois Law Enforcement Torch Run. Every year, more than 3,000 Illinois police officers cross 1,500 miles, carrying the Flame of Hope through their hometowns until they reach Normal, Illinois, where the State Summer Games are held in June.

Dunkin’ Donuts franchisees are proud contributors to these efforts, whose goal is to donate money but also to raise awareness about the Special Olympics athletes and their achievements.