In just one day, the Dunkin’ Donuts in Palos Heights, Illinois, raised $3,800 to support the Illinois Special Olympics Games held this month in Normal, Illinois. Its sister store in Summit, Ill., raised a similar amount, as part of their annual “Cops on the Roof” event, a day when police officers – and celebrities such as Mrs. Illinois 2012 Lisa Sonnenberg, former NBA great Bill Wennington, and Attorney General Lisa Madigan – “staked out” Dunkin’ Donuts rooftops across Illinois. 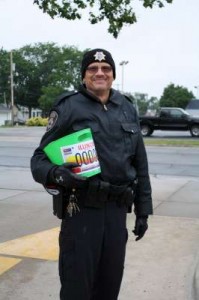 Each year, 3,000 law enforcement officers around the state hold a torch run covering 1,500 miles, arriving in Normal just in time for the games. Collectively, 130 independently owned and operated Dunkin’ Donuts across Illinois raised $243,000, a huge increase from last year’s total of $215,000.

Illinois residents who stopped by the local Dunkin’ Donuts in Palos Heights Park, Bedford Park, and Summit for their usual morning pick-me-up on June 1st may have been surprised to look up and see police officers on the roof of the building. It was the just Illinois Dunkin’ Donuts franchisees’ way of helping state police officers “shout from the rooftops” to raise money and increase public knowledge about a very important cause: the Illinois Special Olympics.

For the 10th year in a row, police officers staked out rooftops at about 130 Dunkin Donuts in Illinois starting at 5 a.m. Dunkin’s Donuts donated $10,000 to the Illinois Law Enforcement Torch Run to benefit Special Olympics. Customers who gave were rewarded with Dunkin’ favorites like free coffee and donuts.